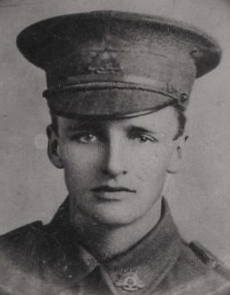 On 17 July 1915, 19 year old Ryde lad Henry Nelson, equipped with a letter from his parents giving their permission, enlisted for service in the AIF. One year and two days later he was killed in action during what has been described as the worst night in Australian history. More than 5,500 Australian soldiers were killed during 19–20 July 1916 at Fromelles.

In March 1917, his mother wrote to the Army, stating that “Our poor lad may be suffering from an injury to his head or shell shock, and may have forgotten who he is. We all have the feeling that he is not dead.” Sadly, the Red Cross wrote to Henry’s family that same month, advising them that Henry’s name had appeared on a list, given to them by the Germans, of men that they had buried.

Henry’s body lay in a massed grave until recently when the grave was located at Pheasant Wood in the Fromelles area. Henry is now interred in the new CWGC Cemetery at Pheasant Wood.

In August 1922, Elizabeth Nelson, his mum, was sent Henry’s Memorial Plaque (also known as a ‘dead man’s penny’) and Memorial Scroll. Now, some 91 years later, the plaque was found by Lynne Crawford in Bingara, in a box bought from a garage sale some years earlier. Lynne’s neighbour and researcher Helen Cornish contacted Angela Phippen at Ryde Library in the hope of returning the plaque to Henry’s family.

Angela was able to put Lynne in touch with the Ryde District Historical Society, who, for the past two years, has been working on the Ryde Goes to War Project– a project aimed at identifying all people from Ryde who served in WW1. Through various contacts, and research undertaken, RDHS was able to contact Judy Hanlen, a great niece of Henry Nelson, and let her know that the plaque had been found.

Now, on Saturday 16 March 2013 at 2.00pm the plaque will be reunited with Henry’s family. You are invited to join us in a short function to be held in the Wallumetta Room, Ryde Library, 1 Pope Street, Ryde NSW 2112 (cnr Pope and Devlin Streets, within Top Ryde City Shopping Centre).

Coincidently the Ryde Historical Society, as part of its Ryde Goes to War Project has been looking to find the descendants of nine men from our district identified as possibly buried in the Pheasant Wood Cemetery, with the idea to assist in their DNA identification. Henry Nelson had already been identified as one of the men being researched. Efforts by his great niece Judy Hanlen to match DNA to identify him, have failed. The Society is pleased to be able to present the Memorial Plaque to Judy as a tangible link to her great uncle.

If you would like any additional information or details, or you plan on attending, please contact RDHS on (02) 9807 7137 or email Ryde District Historical Society at rydegoestowar@gmail.com. To assist with catering, please RSVP by 11 March 2013.