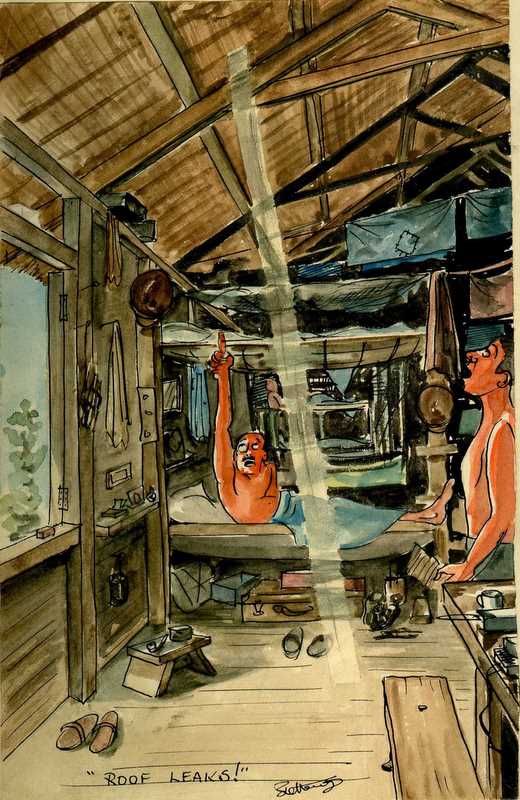 For Issue 15, our iPad magazine includes some very special bonus material not in our Issue 15 paper edition. We showcase the art of Lancashire man, Des Bettany, who joined the Royal Artillery in 1939 and was captured by the Japanese in 1942, with the fall of Singapore. Des was among the many Commonwealth POWs held at Changi and to keep his and his mates spirits up he produced a series of cartoons.

Here, Keith Bettany has curated a special collection of his father’s works. Click on the images below to see the artwork in full and read about the story behind each cartoon. For more, visit www.changipowart.com

From Changi to SA — The Cartoon Legacy of POW Bettany, features a selection of Des’s artwork and will be on show during About Time, South Australia’s history festival.

In 1974 artist Des Bettany retired as acting principal of one of the oldest art schools in Australia, the SA School of Art, now within the University of South Australia. Des’ journey to Australia began in the cruel setting of Changi, the Japanese POW camp, where he gained respect and affection for Australian prisoners, recording shared experiences in a fascinating cartoon legacy.

Born in the Lancashire mill town of Burnley in 1919, Des grew up the second of four children. While attending secondary school, he developed an interest in art and music. On leaving school he trained as an analytical chemist and worked in the chemistry lab of an artificial silk factory. Early in 1939 he and a number of friends joined the Territorial Army (Royal Artillery) and was mobilised in August of that year. Lance Bombardier Bettany fought in France and Belgium with the 88th Field Regiment, Royal Artillery, manning 25 pounder field guns, and after evacuation from Dunkirk, served in various locations in southern England, in preparation for the anticipated German invasion. The regiment then boarded the troopship ‘Empress of Canada’, bound for the Far East. In the Malayan campaign he fought the Japanese at Ipoh, Alor Star and Kuantan, and saw most of the major actions in Malaya until capitulation in Singapore in February 1942.

From his first camp at Towner Road, Des was among the many POWs working around Singapore to clear up and salvage damaged equipment for the Japanese war effort. Later moved to Changi gaol, Des joined working parties which among other tasks were required to clear swamp country to build an airfield, on the site of the current Changi International Airport. As a POW, he kept spirits up by producing a series of cartoons, some of which satirised his captors. He also became part of a ‘production line’ creating programs for the many theatrical and musicals that were produced in the camps.

In contrast to much of the POW art which survives from this period, Des’s work finds uplifting humour in the day-to-day existence of the POW. The spirit of much of the work is one of light-heartedness, helping Des to keep a sense of optimism in the face of a brutal captor. Des was repatriated to England and arrived home in late September 1945. He studied art in Leeds and was appointed to the South Shields School of Art in the north-east of England, eventually becoming acting principal.

Des emigrated with his young family to Australia in 1958. He was employed at the South Australian School of Art in Adelaide, rising to the position of acting principal before retiring in 1974. He seldom spoke about his wartime experiences. His children were aware of the album of sketches and theatre programs, which he kept in his wardrobe, but it was only in 1995, on the 50th anniversary of the end of the war, that he spoke in more detail about his life as an artilleryman and a POW. Des died in 2000; the website www.changipowart.com was produced in 2012 by his children in dedication to his art and to his fellow POWs.

The Bettany family has received numerous other images that Des painted and gave away to his mates since the website was launched, and are always looking for more. With modern technology, these have simply been scanned by their owners from the other side of the world, emailed to the family and are included in the website. If you have any of Des’s artwork, please make contact with is family through the website; they do not want the originals, just a scanned copy. Or jump onto the site and leave your comments to help complete the story of Des’s artwork and be part of this amazing family project!