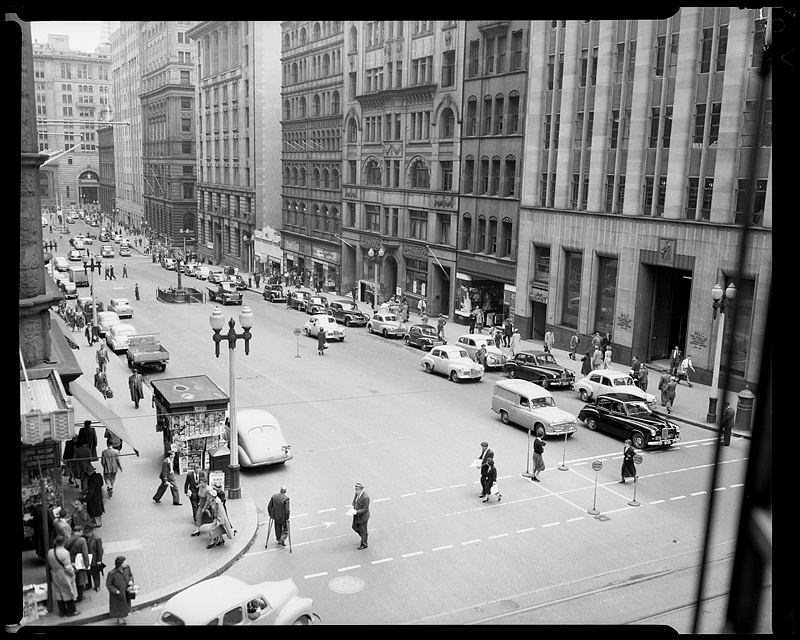 Presented by Sydney Living Museums, Public Sydney: stop, look, live! is a new exhibition at the Museum of Sydney. Through photography, objects, film and storytelling, the exhibition features Sydney’s best loved public spaces and the stories of the people who use them. The exhibition was inspired by the Sydney Living Museums’ involvement in the recent publication of a wonderful book — Public Sydney: Drawing the City — by award-winning Sydney architects Peter John Cantrill and Philip Thalis.

Tony Cocking has seen it all over the many years he has worked his family’s fresh fruit barrow, smack bang in the middle of Sydney’s CBD, on the corner of Barrack and George Streets. Now in his early fifties, he started working there with his father during school holidays at the age of 12 or 13.

“I remember going in with my mother and the queues in front of the barrow would be four or five deep. Everything would be sold out by 3pm.” In those days, a small range of staples were sold in large quantities: peas, beans, bananas “and always tomatoes.”

Full of great advice about business and life, Tony’s father, Cecil Thomas Cocking was “Redfern born and bred.” He and a group of men started managing a fruit barrow in Market Street for the limbless soldiers to whom it was licensed. The fruit barrow scheme, established via the City Council, saw a number of barrow licences granted to returned soldiers through the Limbless Soldiers’ Association. After the soldiers’ deaths, the licence was eventually granted to Cecil and then passed to Tony when Cecil died.

Many things have changed since Tony’s father set up his barrow in Barrack Street in 1955. “Back in the 50s, to pay for a power bill or buy a lottery ticket, you had to go into town,” says Tony. “There were so many people around.” Tony also recalls that people used to have a lot more time to stop and chat. “On every street corner, at every train station, there was a little fruit shop man. There was interaction about what’s in season. Now people want to buy totally out of season,” he says. “I’ve never seen a piece of fruit that evokes memories like figs. People would tell me stories about eating figs from the backyard trees of their grandparents’ homes or they’d give me recipes. This is rare now.” Tony has also noticed that people are not as polite or respectful as they used to be.

Quoting his father, who told him 30 years ago: “The ruination of this game will be self-service.” Tony acknowledges sadly, that the days of the fruit barrowman are numbered. “It’s all about convenience now. Who shells peas anymore?” he says. “We’re a throwaway society. People don’t differentiate between an “apple”, and an “apple”. His father also told him: “Don’t install a cool room at home — it’ll only make you lazy.” So, Tony still buys fresh produce at the markets daily and only buys what he can sell on the day.

Public Sydney is on display at the Museum of Sydney until Sunday 8 September 2013 and is FREE.

Thanks to Paula Grunseit for another terrific story. Click here to read more from Paula.