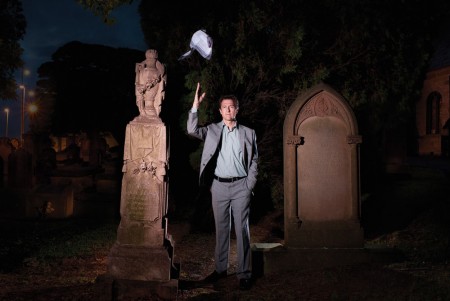 Ancestor’s name: Paul Benson
Conviction: Stealing a handkerchief
Sentence: Transported for seven years
Age: 16 when transported
Arrived: 1831 on the Lady Harewood
Mine says: “For the shoot at Paul Benson’s grave, I took along several embroidered handkerchiefs from my childhood. We were working out what to do for the shot and I saw John put a handkerchief into his pocket. When the shoot ended I said “I think you’ve got my handkerchief there”, but he seemed to be in a dream state and didn’t hear me. I thought as he had a young child, he was probably sleep-deprived! When I went home I realised the act of his ancestor had just been re-enacted right there at his grave! When I emailed him the next day he was very apologetic and hadn’t even realised.”