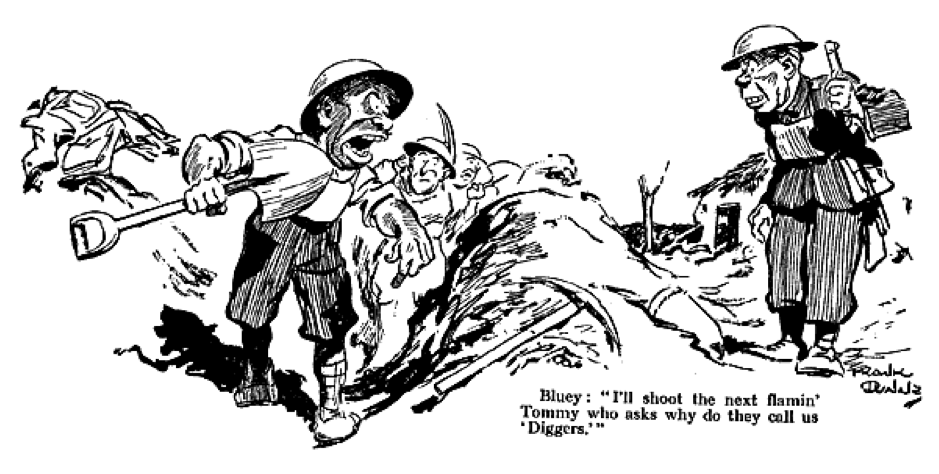 Home > Blog > Featured > The Genesis of Digger by Tim Lycett

The derivation of the term ‘Digger’ as a colloquial reference to Australian and New Zealand soldiers originates from the First World War. As the years have passed, it has become more prominently synonymous with the Australian soldier while its application to New Zealand’s soldiers has waned significantly.

But regardless of which country continues to use it, debate still exists about who can lay claim to its origin and is a far more contentious issue. In his 1945 work, ‘The Digger: A Study in Democracy’, Alan Butler defined what it meant to be called a Digger during the war and the ethos for which it was intended,

“ ‘Digger’ and ‘dig’ were used by soldiers as friendly terms of address equivalent to ‘cobber’ and ‘mate’ … The term has tended to be defined in high-value laden ways … ‘a man for whom freedom, comradeship, a wide tolerance, and a strong sense of the innate worth of man, count for more than all the kingdoms of the world, and the glory in them.’”

Enlisting in 1914, Butler had served as a Regimental Medical Officer at Gallipoli, earning the Distinguished Service Order for his courage and devotion to duty on the day of the landing and in its immediate aftermath. He was promoted to the position of Deputy Assistant Director of Medical Services, I Anzac Corps and later while serving on the Western Front was given command of the 3rd Field Ambulance.

And yet, although aptly characterizing what the term ‘Digger’ had come to mean, like many he was unable to pinpoint the origins of its common use by Anzac soldiers in reference to themselves and by whom it had first been used in this fashion.

It is a well known fact that on the Australian gold fields of the 1850’s, the term ‘Digger’ first appeared, making reference to the huge influx of miners from all over the globe seeking their fortunes at the gold diggings. These miners soon became known as the Diggers and before long the name was adopted into the Australian language as a type of informal greeting generally associated with the gold mining community.

Similarly, at about the same time in New Zealand, the kauri gum industry was undergoing change.

First used by the Maori inhabitants, kauri gum was formed when the resin of kauri trees leaked out through fractures in the bark, hardening with the exposure to air. Lumps commonly fell to the ground and became covered with soil and forest litter, eventually fossilising.

The gum had many local uses including chewing, tattooing, jewellery and because of its highly flammable properties, it was used as a fire starter. But by the 1840’s, it had become Auckland’s main commercial export to London and America due in the most part to its particularly effective use in the production of varnish. Initially, the gum was readily accessible, commonly found lying on the ground. But by 1850 most of this surface-lying gum had been collected and to find further deposits, it had to be dug from the ground. The resultant transient workforce moving from place to place to unearth the gum became known as Gum Diggers.

It is from both these backgrounds that many of the later claims about the First World War Digger originate. In the February 1918 edition of the trench newspaper, ‘Aussie’, one submission by a contributor echoed the idea,

“About the origin of this word Digger – you listen to me. As long as I can remember it’s been used on the goldfields of Western Australia. It’s always been quite common among the gold diggers there. It came to France when the sandgropers gave up digging on the goldfields of W.A. and carried on with it on the battlefields of France and Flanders.”

A similar enquiry conducted during 1920 by ‘The Diggers’ Gazette’ attempted to get to the bottom of the matter but only brought up a number of suggestions that also stemmed from the Australian gold rush days,

“The writer enlisted in Victoria and the term was much in use in camp there before the days of Gallipoli, and as our ranks had a large sprinkling of Ballarat and Bendigo men, I used to think that it derived its origin from that source. I may be wrong but I believe it originated in the trenches of Coolgardie and Ballarat and other pleasure resorts in the days of the rush.”

In opposition to the gold fields theory, the renowned war correspondent and author of the Australian Official Histories, C.E.W. Bean, laid the origin of the term squarely with the New Zealanders. In Volume IV of his histories, Bean records during the Third Battle of Ypres August-September 1917,

“It was at this stage that the Australian soldiers – in particular, the infantry – came to be known, together with the New Zealanders, as ‘the Diggers’. The term had occasionally been heard before, but hitherto had been general only among the New Zealanders, who are said to have inherited it from the gum-diggers of their country. It carried so rich an implication of the Anzac infantryman’s own view of his functions that it spread like fire through the A.I.F., and by the end of the year was the general term of address for Australian or New Zealand soldiers.”

Similarly to Bean, in A.G. Pretty’s ‘Glossary of Slang and Particular Terms in Use in the AIF (1921-1924)’, he also attributes the origin of Digger to the New Zealanders,

“Mate, friend. Used in the second or third person. This term had been in use on the Aust. gold fields, and New Zealand Kauri gum fields for many years prior to the war. It was not until the end of 1917 or early 1918 that it came into universal use in the A.I.F. or N.Z.E.F.
The first to use the term, to any extent were the New Zealanders from whom it quickly spread through the A.I.F.”

But in a recent analysis of Pretty’s book, Amanda Laugensen annotates the original entry with a note of caution,

“The explanation given here as to how it was first used by New Zealanders has no supporting evidence.”

And although backing away slightly from this original annotation, in her 2005 book, ‘Diggerspeak: The Language of Australians at War’, Laugensen instead takes the analysis in a different direction and makes a very valid point,

“There is some evidence to support the argument that digger may have been brought with the New Zealand Expeditionary Force, from the shortened form of Gumdigger…..During the First World War, the first Australians use of digger to refer to an Australian soldier was in 1916, and this appears very early to be explained merely as a transfer from the New Zealand sense.”

Both Bean and Pretty place the timing of the appearance of ‘Digger’ towards the end of 1917 after having been adopted from the New Zealanders, but all available evidence implies otherwise and it is now commonly accepted that both nationalities began using it much earlier. This in turn casts doubt on both men’s theory regarding its origin. There had also been suggestions that the term had been derived as early as the Gallipoli campaign and a number of proponents claimed it resulted from the order issued by Sir Ian Hamilton just after the initial landings,

“You have got through the difficult business, now you have only to dig, dig, dig, until you are safe”.

However there is no evidence, documented or otherwise, to suggest that ‘digger’ became a commonly used term for the Anzac troops on Gallipoli, and more than likely its occasional use on the peninsula only stemmed from a handful of men, possibly former miners, who had become accustomed to applying it in its original form during their civilian lives before the war.

The general consensus is that the use of ‘digger’ to refer to Anzac troops came into vogue during the second half of 1916. Given that it was not an unknown term in either country and was no doubt used on the odd occasion amongst the troops in its previous civilian guise, we can only surmise that a particular incident must have occurred involving Australian or New Zealand troops to establish its new meaning and prompt its general use.

One article in Melbourne’s ‘The Age’ newspaper in August 1918, accurately predicted the future for the term ‘Digger’ but at the same time expressed the confusion and debate already evident at that early stage when trying to pinpoint its source,

“Many people have asked for an explanation. Inquiry amongst those recently from the trenches shows that the origin of the expression is vague. There are various definitions, but few of them agree. The general belief is the name “just growed”. When severe fighting in France had so changed the personnel of battalions that only a small proportion of the survivors had ever seen Anzac Cove, it is said the modest new recruits hesitated to accept the reflected glory of the ‘Anzac’ name which they had had no hand in burnishing. So many of the later reinforcements came from Western Australia and so many of the eastern men were from the mining fields, that ‘Digger’ came easiest to the lips; and then the Mining Corps were all ‘diggers’. So the whole force seems to have accepted naturally the title which constantly recurs now in letter, cable message and cartoon. For all time the Australian soldier will probably be known as ‘Digger’ though he will not know why.”

In his book, ‘The Maori Pioneer Battalion in the First World War’, historian Christopher Pugsley makes the claim that the nickname ‘Diggers’ was first applied to the Maori Pioneers after their enormous efforts to dig Turk Lane and Fish Alley trenches in the vicinity of Flers during September 1916. According to Pugsley, after the completion of these trenches in record time, the Maoris were given the title ‘Diggers’ which was adopted by the remainder of the New Zealand Division and later in 1917, spread to the Australians.