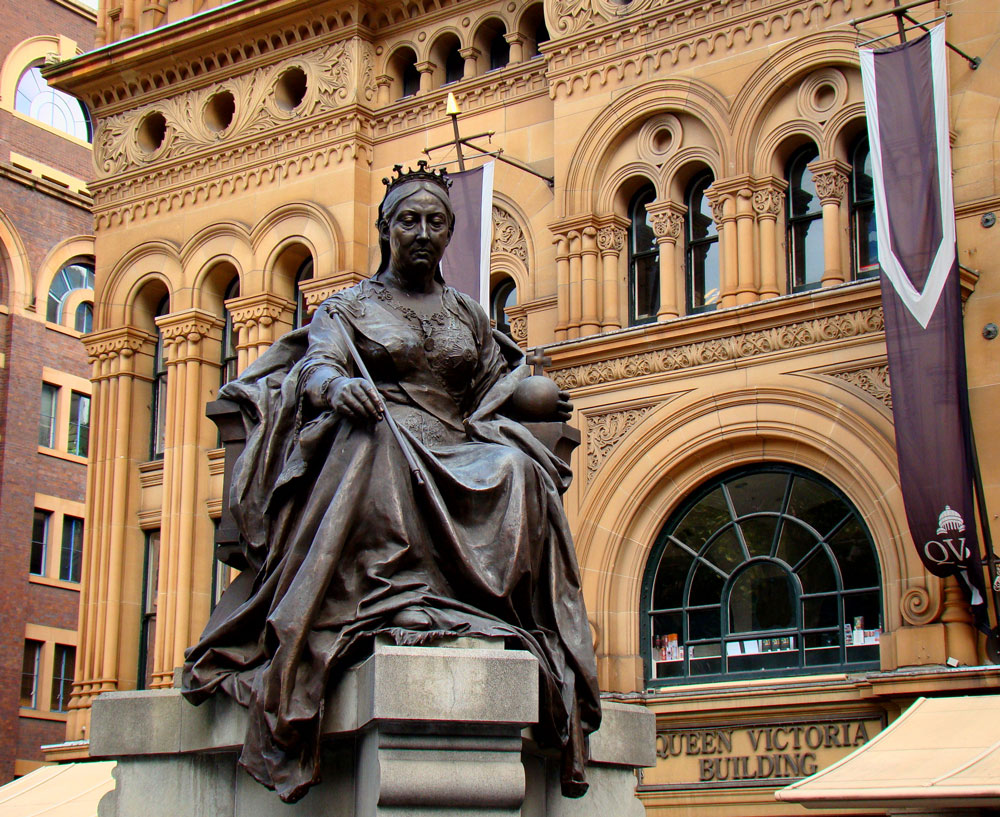 Extract from a blog written by Donal Fallon, on Come here to me!.

It was unveiled on February 17th 1908 in the grounds of Leinster House at a ceremony which saw about 1,000 troops on parade, and a large number of invited guests. The Lord Lieutenant was chosen to unveil the monument, and he noted that “we are assembled here to dedicate this noble work of art to the perpetual commemoration of a great personality and a great life.” The statue of Victoria, made of bronze, was an impressive 15 foot. Its location placed it “before the Museum of Science and Art and the National Library, and in front of the historic building, Leinster House, now the home of the Royal Dublin Society.”

Victoria was not the only figure within the monument, as she was joined by figures depicting Hibernia at War, Hibernia at Peace and Fame. The dying soldier shown, representing ‘Hibernia at War’, takes the form of an Irish participant in the South Africa wars, who is shown dying still clutching his rifle. Part of the inscription on the monuments base noted “Victoria, Queen of the United Kingdom of Great Britain and Ireland, Empress of India, erected by her Irish subjects.”

The statue would survive the revolutionary period intact, but following Irish independence focus turned to it and the potential of removing it. While several statues associated with the British empire were targeted by militant republicans in the first few decades of independence, it was the state which began looking at ways to remove Victoria from her position in front of the parliament. In August 1929 The Irish Times reported that discussions were under way to remove the statue “on the basis that its continued presence there is repugnant to national feeling, and that, from an artistic point of view, it disfigures the architectural beauty of the parliamentary buildings”. In the Dáil however in 1930, the government line was that “The statue in question is not regarded as a valuable or attractive work of art; nevertheless, it is not thought that its effect on popular taste is so debasing as to necessitate the expenditure of public funds on its removal”

In July 1948, work finally begun on removing Victoria from Leinster Lawn. The process saw the removal of the Portland stone which formed the base of the monument, and marked the beginning of a process that would see Victoria end up in storage at the Royal Hospital Kilmainham. Newspaper reports quoted the Taoiseach as saying its removal was intended to provide parking space for cars. The process of removing took eight weeks. When being taken from Leinster House, Victoria had to be removed on her back, being too tall to pass through the gates otherwise. When in storage, there was an approach made by London,Ontario to acquire the statue for re-erection in Canada. The Irish Times outlined that “the cost of transport was a stumbling block when Canadian interest failed to surmount.”

Victoria’s statue today.
In the end, the Dublin statue would find a home in Sydney. In 1986, the statue departed Dublin Port in a container vessel bound for Australia. Following a request from the Lord Mayor of Sydney, a decision was reached to send it on a “permanent loan” basis. The story leading to this change of location was told in a letter to The Irish Times in January 1995 by David Keane who noted that he had been approached by a colleague in Australia working on the restoration of the Queen Victoria Building in Sydney who was aware of the existence of the Irish monument. Keane noted that the monument had been moved from Kilmainham to the site of an old reformatory school in Offaly, and that it “required a considerable amount of sleuthing to track it down, but there it was in the long grass, looking surprisingly large at ground level.”

Today, it is noted beneath the statue that:

At the request of the City of Sydney this statue of Queen Victoria was presented by the Government and people of Ireland in a spirit of goodwill and friendship.Until 1947, it stood in front of Leinster House, Dublin, The Seat of The Irish Parliament. Sculptured by John Hughes, RHA, Dublin 1865-1941. Unveiled on 20th December, 1987 by Sir Eric Neal, Chief Commissioner.

First published on Come here to me!.