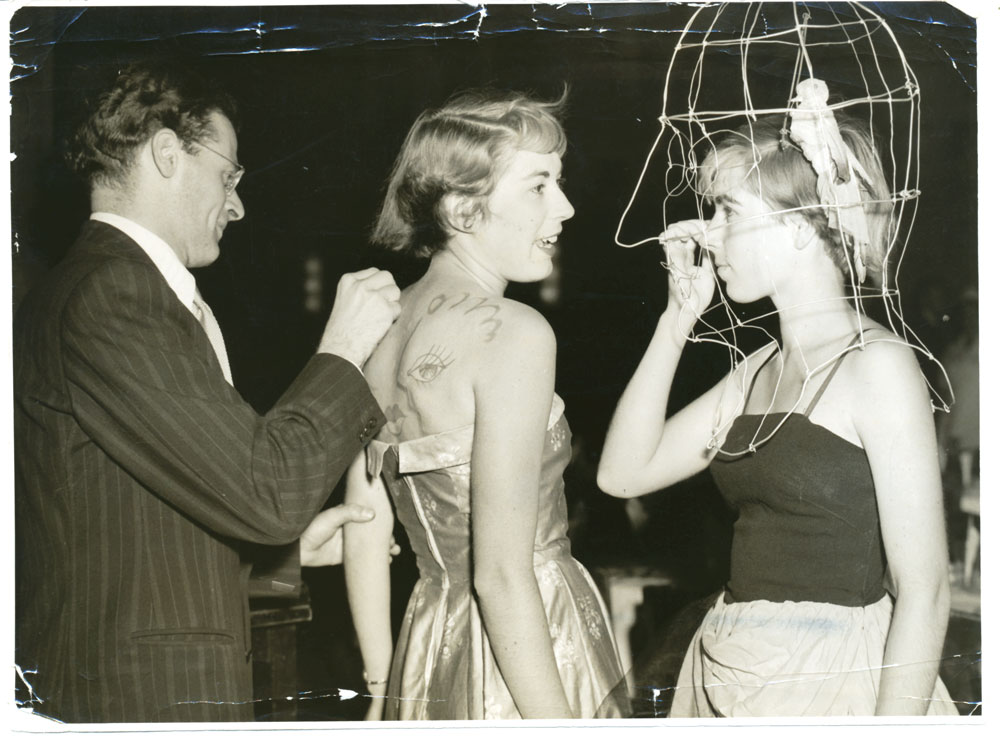 Booze, bohemia and bawdiness — but all for a good cause! Sydney’s Artists’ Balls stirred passions as well as controversies. Here, Deborah Beck gives us a peek into their infamous history.

In 1921 a bout of scarlet fever changed the course of life for a 13-year-old schoolgirl named Victoria Cowdroy, known as Vic. After her recovery, instead of returning to continue at Fort Street High School, she chose to study art at East Sydney Technical College, and later became the first art student to benefit from a scholarship offered by the Artists Ball Trust Fund in 1925. The prize provided £150 for the winning student to study for one year full time at a recognised art school. This generous award allowed Vic to complete her diploma, where she became a star pupil of the sculpture master Rayner Hoff. During her scholarship, she completed a poster for the 1926 Artists’ Ball, an annual event held in the Sydney Town Hall – an event which has become a symbol of the ‘golden decade’ of the 1920s.

The Artists’ Balls in Sydney took their cue from the outrageous balls held in the 1920s in Europe. The Parisian version of the Artists’ Balls began in Montmartre in 1892. They were carnival-like celebrations organised by graduates from the four different creative disciplines of the École Nationale des Beaux-Arts: architecture, painting, sculpture and printing. The art students’ Bal des Quat’z’Arts was held every spring and often ended with a swim in the fountain in the Place de la Concorde. Like the balls in Sydney, London and Berlin, fancy dress was obligatory, with prizes for best dressed, and the profits from the balls became scholarships awarded for needy artists. Regulars at the Paris Artists’ Balls were Matisse, Vlaminck, van Dongen, Pascin and the much-loved model and muse, Kiki. The Artists’ Ball soon took on bacchanalian aspects and is credited with the invention of the striptease, which apparently took place in front of the Moulin Rouge in 1893. Many Parisians and public officials objected to the lack of proper attire of the ball participants as well as the noisy parading through the streets after the ball.

Artists’ Balls in Sydney were held as early as 1881, as part of the Garden Palace Exhibition in the Botanic Gardens. Artist D H Souter remembered a ball in 1898 at the Paddington Town Hall (which had opened in 1891) for which he designed a black and white set. Another was held at the same venue in 1901, during which the artists wore costumes representing a tube of colour loaned by theatrical manager J C Williamson. The Paddington Town Hall was also the site for the Royal Art Society’s balls in 1908 and 1909. Although the artists wore fancy dress, it appears that these balls were more sedate affairs than the later ones, with palms placed tastefully around the hall, and artists’ work displayed on the walls. Artists’ Balls and masquerades were held annually until WWI broke out.

The huge jazz parties which became the annual Artists’ Masquerade Balls in the 1920s were in part a response to the war, as more young men and women began to live independent lives, enjoying the sensual rhythms of jazz and a more bohemian lifestyle. The thousands of partygoers who attended these balls were not all connected to the arts, although the majority came from the Society of Artists, the Art Department of East Sydney Technical College, the Black and White Artists Society and the University of Sydney.

The balls were held to raise money for charities, and the first ball of the decade, held in Sydney Town Hall on 21 August 1922, raised around £3,000 in aid of a Red Cross project to establish a pottery workshop for disabled diggers. Other charities that benefited included St John Ambulance, the Student Scholarship Fund, and, in 1957, the Opera House Appeal fund.

The 1922 ball set the precedent, transforming Sydney Town Hall into an atmospheric vaudeville-like arena, with enormous grotesque figures and large friezes as decorations. Attendees wore extravagant fancy-dress costumes and masks. The masks were removed on the stroke of midnight to reveal artists and models such as cartoonists Stan Cross and George Finey, muse Rose Lindsay, sculptor Theodora Cowan, and artist George Lambert, as well as many of Sydney’s social elite.

Souter also supervised the decorations for the 1923 Artists’ Ball, which he described as a ‘jazz fantasy’. It was at this ball that the famous poet, writer and ‘Queen of Bohemia’ Dulcie Deamer wore her cavewoman outfit. The photograph of Deamer dressed in a wrap-around leopard skin hide complete with a dogtooth necklace has come to symbolise the joie de vivre of the decade, despite Deamer’s own protest regarding its relevance.

For the 1924 ball, a 32-page souvenir program of the event was printed, which included poems by Kenneth Slessor as well as Dulcie, and images of the enormous bas-relief panels designed by Vic Cowdroy that decorated the Town Hall’s eastern gallery. The souvenir program gave the impression that it was a light-hearted romp, but newspaper articles tell a different story, and Dulcie called it the ‘Night of the Great Scandal’. Alcohol flowed freely, and spirits were smuggled into the venue in great quantities. In the basement of the Town Hall, the floor was covered in beer. Fights erupted after gatecrashers climbed through the basement windows, and extra police and the fire brigade were eventually called to clear the overcrowded basement, which was littered with drunken semi-naked women, broken crockery and high-spirited revellers.

After this debacle, other balls in that decade were more chaste affairs, with bans on alcohol and more police on hand. Despite these restrictions, Dulcie, who attended every Artists’ Ball for 30 years, counted the 1927 ball as her favourite, and described the “joy-drunk spirit of sheer happiness” enjoyed by those who attended.

During the 1930s and 1940s the balls were held in a variety of venues in Sydney, including the Palais Royale, the David Jones Auditorium, the Trocadero and the Blaxland Galleries. Artists and students attending the balls continued to make the front pages of newspapers throughout the 1930s. Former National Art School student and teacher Jean Isherwood remembered the headlines in the Sunday Telegraph proclaiming ‘Cleopatra in Kitchen Array’, when she wore soup strainers for breast plates, key rings for earrings, and a transparent dress to a ball at the Trocadero.

At East Sydney Technical College, the National Art School Students’ Club began organising their own version of the Artists’ Balls in the 1930s. One of the students who formed the club was Gwenna Welch, aged 16 in 1933. The first ball she remembers was held in a large studio at the Technical College, which occupied the former Darlinghurst Gaol, with the theme of ‘Danse Macabre’. Before the ball the students set up the disused women’s cell block (later the Cell Block Theatre, where actress Katharine Hepburn famously gave a speech about the plight of women) as a ‘chamber of horrors’. Art school props such as coffins and skeletons were covered with fake cobwebs, and students dressed as ghosts jumped out to scare the partygoers. This ball started a long tradition of fancy dress balls at the National Art School. In the 1950s and 1960s, students such as artist Martin Sharp designed the posters and decorations. Like their predecessors in the 1920s, these balls became notorious for getting out of hand and being raided by police.

Once again, the Artists’ Balls were suspended during WWII, apart from one held in 1940 to raise funds in aid of the Technical Education Patriotic and War Fund. After the war, the artists of Sydney again turned to the balls as a way of forgetting, kicking up their heels and making up for lost time.

The Art Students’ Balls and Artists’ Balls continued to be held at the Trocadero throughout the 1950s and early 1960s. Situated on George Street near Bathurst Street, this vast dance hall operated from 1936 to 1971. Affectionately known as the ‘Troc’, it was once the most glamorous dance palace in Sydney, and accommodated up to 2,000 people. The Troc started out as a swing and jazz venue, but by the mid-1950s the leading dances were the quickstep, the foxtrot, the waltz and the tango. Partygoers would stand in front of the circular red plush lounge surrounding an enormous bouquet of flowers (invariably gladioli) to have their photograph taken in their costumes, and then proceed to the main auditorium where tables were lavishly decorated in keeping with the theme of the ball.

The balls at the Troc were a magnet for artists and their models and much of Sydney’s bohemia. One famous incident involved drag queens arriving in giant removalist vans because their frocks and hairstyles were too large to be transported any other way. The Trocadero management and police were not impressed by the boisterous behaviour of the artists, particularly at the 1961 ball, when one of the tables caught alight. By the early 1960s, most of the annual Art Students’ Balls were transferred to the Paddington Town Hall. It was big enough to accommodate the crowds and its proximity to the National Art School suited the students and encouraged them to design even more lavish sets. NAS Club president Bill Huff-Johnston attended all the balls from 1956 to 1961. He recalls one year when the club received an extraordinary account for furniture damage after the ball, with the improbable damage sited as ‘teeth marks up chair leg’.

Newspaper headlines chronicling the excesses soon played a part in the banning of the balls from Paddington Town Hall, and in the 1970s they returned to the Cell Block Theatre at the National Art School. The balls continued sporadically until 2002, when they once again became an annual event.

Deborah Beck is an author, artist and historian. She is currently a lecturer and an archivist at the National Art School. Her second book, Set in Stone: the Cell Block Theatre (UNSW Press, $49.95) won a NSW Premier’s History award in 2012.

The theme for NSW History Week 2013 is “Picture This” and the eight-day long event from 7 to 15 September looks at the way imagery has influenced our past. In the image conscious 21st century, photographs shape the world. How has the development of the visual changed, informed and sculpted society? How do historians use art and photography to inform their research? Who were the original mad men of the advertising industry? Who were our image makers? All cultures have created their view of the world through visual representations. History Week 2013 will bring the past into view through the frame of images.

And, as part of History Week 2013, the History Council of NSW [HCNSW] will be hosting a recreation of the Artists’ Balls! Visit www.historyweek.com.au to find out more.

The HCNSW plans to recreate an Artists’ Ball, events which took place from the 1920s to the 1960s in Sydney at various venues. The Artists’ Balls in Sydney took their cue from the outrageous balls held in the 1920s in Europe. The Parisian version of the Artists’ Balls began in Montmartre in 1892. They were carnival-like celebrations, attended by artists, models, designers, architects, journalists and other people attached to the cultural community. The event will include entertainment, decorations, food and drinks inspired by the original ball so that guests feel they are experiencing a moment in time.

“The Ballroom was festooned with pink garlands and at intervals hung huge pink muslin bags filled with multi coloured balloons that betokened a merry time at midnight, when they were to be released upon the heads of dancers”.

In 1933 David Jones hosted an Artists’ Ball on Level 7 featuring a fairy tale theme. In 2013 the first Artists’ Ball, ‘the fairytale begins..’ will be held as the official launch of History Week 2013. This event is a fundraiser for the History Council of NSW.

When: Saturday 7 September 2013, 8:00PM – 11:30PM
Where: On Seven at David Jones, Elizabeth Street Store Sydney
Cost: Tickets are $125 and include drinks and a light supper. Click to book
Dress: The audience will be invited to dress to theme.

There’s even more information at www.artistsball.com.au. See you there!