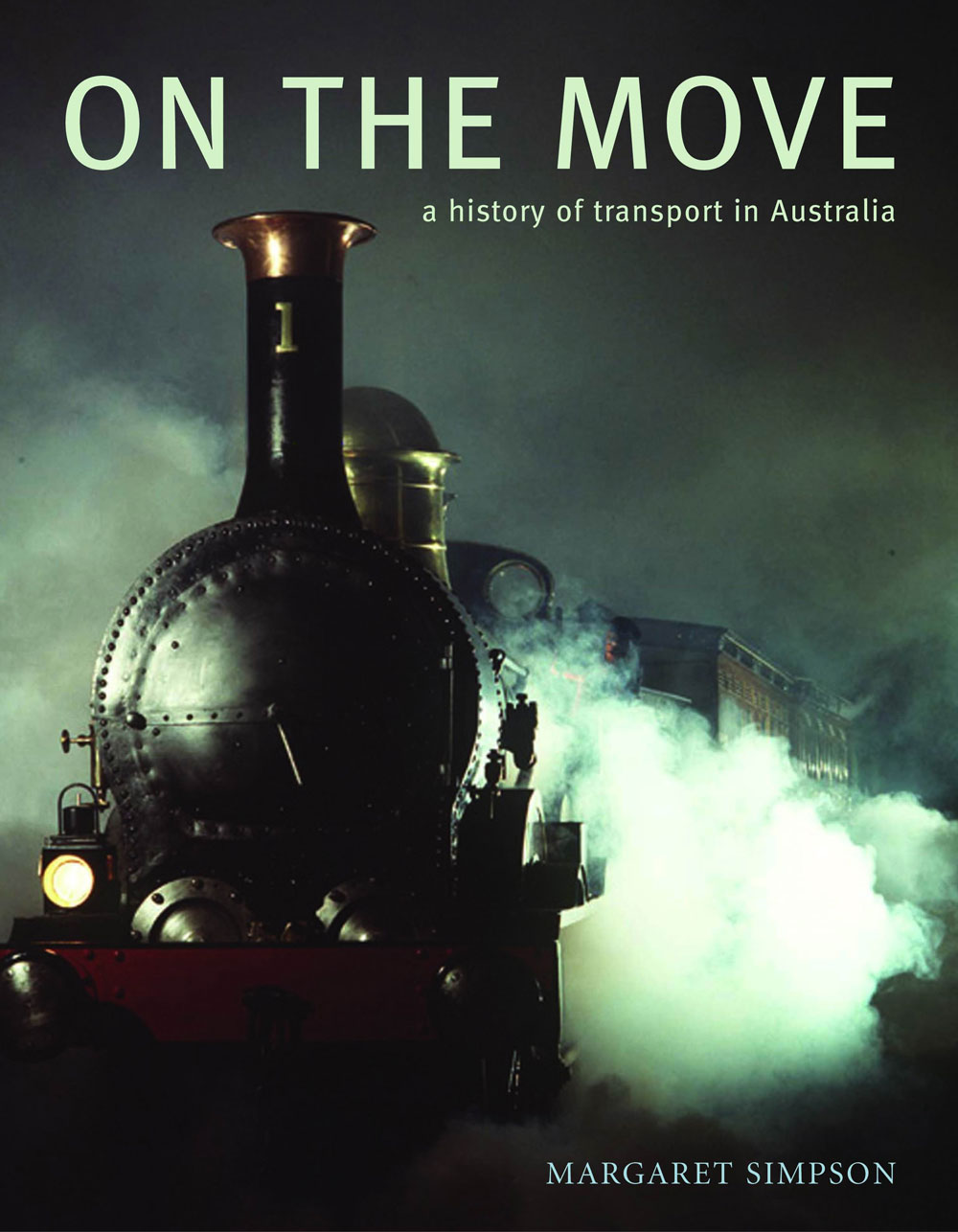 Home > Blog > Featured > Author Q&A :: On the Move: a history of transport in Australia by Margaret Simpson

This week we talk to Margaret Simpson, author of On the Move: a history of transport in Australia. On the move explores the fascinating stories behind the many and varied forms of transport and travel in Australia from early Indigenous trade routes to the high-tech vehicles of the early 21st century. Drawing on the Powerhouse Museum’s diverse transport collection, the book gives a unique insight into how different modes of transport were adapted to meet the challenges of distance and isolation across this vast continent. Find out how Afghan cameleers maintained their packsaddles to stop saddle sores, how Holden cars cornered the market, how Australian aviators conquered the skies, and why riding in a Cobb & Co coach could make you feel seasick. This beautifully illustrated publication is a must for anyone wanting to see transport history really come to life.

Recommended for transport enthusiasts and anyone interested in Australian social history, innovation and design. With links to the curriculum for upper primary and secondary, this book is an invaluable resource for students of Australian history, design and technology.

As cities around Australia grapple with increasing traffic congestion many people feel that the future lies in light rail but why did the trams disappear from our streets?

Governments, local authorities and private companies all over Australia pushed tramlines out into suburbs, quite often preceding urban development. After the Second World War, however, with the motor car on the rise, police, motoring organisations and many newspapers began to turn on the trams. They were seen unfairly as the cause of city congestion and an old fashioned relic of the 19th century, not wanted in a modern automobile-based city. Tramways and other public transport systems all over Australia had been under great strain during the war, and many were in a badly worn state at its conclusion. As public transport patronage began to drop off in favour of the car, administrators were not inclined to spend large amounts of money maintaining or expanding the tramways. A policy of conversion to trolley bus or motorbus operation was soon adopted by almost all operators except Melbourne. During the 1950s most of the country’s great tramway systems were dismantled in a series of ill-considered decisions, including those in Newcastle, Kalgoorlie, Fremantle, Launceston, Adelaide (except the Glenelg line), Perth and Geelong. The closure of the immense Sydney system began in 1956 its replacement by diesel buses being spread over five years. As soon as the last tram had passed, the overhead wires were removed and tracks tarred over the next morning to prevent trams being reintroduced if buses were a failure. Hobart’s tramways closed in 1960 and Brisbane’s in 1969. Only Melbourne resisted the anti-tram lobby as its wide streets laid out in a grid pattern could accommodate both trams and cars. Today it is the only major city of the English-speaking world to retain its tramway system in tact, even expanding it.

Margaret: For as long as I can remember I’ve loved researching and writing. At school I couldn’t wait to be given “school projects” and at home made my own illustrated “books”, kept diaries and made scrapbooks. I’ve been incredibly fortunate to have spent most of my working life as a curator at the Powerhouse Museum researching and writing about the Museum’s transport and toy collections. As well as transport history my other books have been about old farm machinery in Australia, Sydney’s old buildings and the NSW goldmining town of Hill End.

IHM: Q. Which resources did you find most helpful? Favourite website? Favourite library?
Margaret: When I first started writing there was no internet. Resources were books, journals, government reports, trade journals, departmental handbooks and tediously leafing through old newspapers. Now Trove has revolutionised historical research in Australia. I wish it’d been around when I wrote On the Move.

My favourite library is the Powerhouse Museum’s own research library which has a wonderful collection of books based on the research needs of the Museum’s staff and its collections from cars to music boxes and dolls to furniture. It’s open to the public by appointment and has excellent runs of industry specific and enthusiasts’ journals, and old department store catalogues.

IHM: Q. What resources did you come across when researching your books?
Margaret: On the Move was the culmination of my 20 years of research into the Transport collection. Rather than just relying on photographs in a book or on line I have been in the unique position of being able to physically look at the items I was researching from camel saddles to trolley buses and car kettles to steam wagons. The book brought a whole lot of my disparate and specific knowledge together to tell a cohesive story about the social history of transport in Australia mainly using the Museum’s collection objects as examples. The Museum’s extensive object files and correspondence also provided a wealth of information. The public can now view these records for free as over 116,000 object records have been put up on the Museum’s online collection on our web site. Click here to search the Powerhouse collection.

IHM: Q. Was there any information you uncovered that stopped you in your tracks? Which stories affected and amused you the most in the course of your research?
Margaret: I was most affected by stories of incredible bravery of our pioneering aviators, Kingsford Smith, Ulm, Hinkler, P.G. Taylor, and more recently Dick Smith. Back on the ground it was perilous just getting around the bush. Horse-drawn vehicles overturned and people were always drowning trying to cross swollen rivers and being thrown from horses. As we speed across modern concrete bridges in our fast air-conditioned cars we give no thought to the trials and tribulations of our forebears.

As far as being amused, I loved the tales about early motoring. It was usually the salesman who instructed the purchaser how to drive. Farmers were apparently the worst pupils. They expected a car to behave like a horse – to stay on course when directed and to steer around obstacles in its path. Often they just left it in the one gear rather than try and work the gearbox. The idea of electric cars isn’t new. I was amazed to read that they were so popular in Sydney in 1916 that Sydney City Council set up a special charging station in Palmer Street.

IHM: Q. What’s your best tip for people wanting to write a history book of their own?
Margaret: My other favourite device is the contemporary quote. No matter how much research you do into transport history it is the account of someone who actually used or experienced that form of transport which informs the reader so much more. One of my favourite from the book refers to catching a steam train from Sydney’s Central station in the 1940s:

How well I remember the Cessnock Express – engine with steam hissing impatiently at Sydney Station’s country platform; carriages of leather seats with collapsible tables and black and white photographs of NSW rail scenes. There were the sloshing of bottles of water in metal brackets at the ends of the carriages; the ballast rushing nosily below the hole in the toilet and the rush to shut the windows before the tunnels forced smoke and soot in to cover everyone in the compartments. I remember fettlers singing out for newspapers to be thrown out as the train passed their line-side tents, and the sight of the engine steaming and smoking and whistling far ahead as we rounded the curve.

IHM: Q. How did you go about bringing the characters and stories to life?
Margaret: My best advice for someone wanting to write a non-fiction history book of their own is to be succinct, have no padding and include facts that are engaging, intriguing, amazing and delightful. Include lots of relevant and interesting photographs as they tell so much about a time and place. Try to include as much first hand information as possible and no matter how well you write, get help with editing to ensure your content makes sense and flows easily.