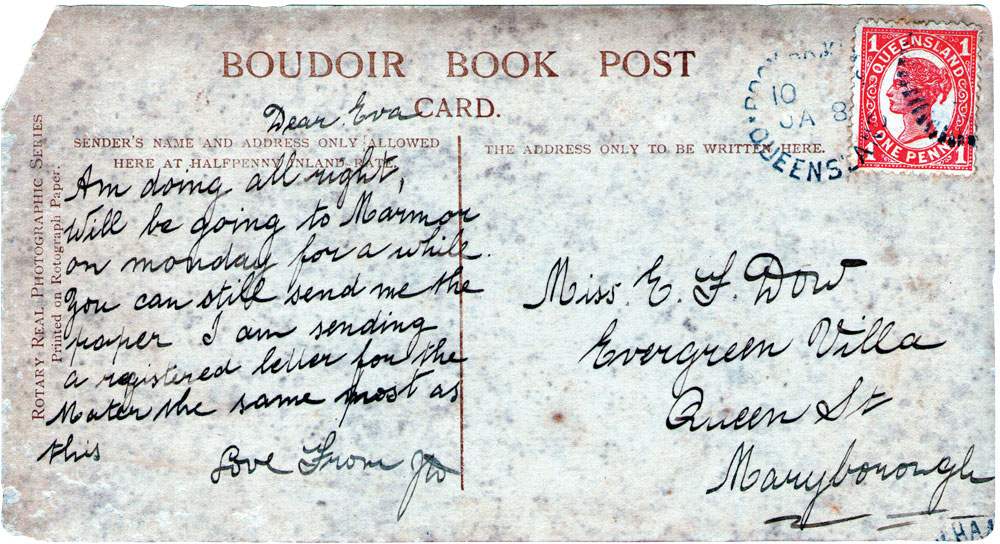 One person’s trash is another person’s treasure? This was definitely the case for librarian and genealogist, Jane Harding, when she recently discovered — quite by chance — some priceless family heirlooms at a vintage fair on Queensland’s Sunshine Coast.

One Saturday morning a few years ago, I cajoled my sister and daughter into visiting Collectorama, a collectables show advertised in our local paper. We weren’t sure what to expect and it never entered my mind that the markets could play a role in my family history research. Upon arrival, we were surprised at the size and scope of the show and spent a fascinating morning wandering the stalls that were laden with vintage jewellery, heirloom china, colourful carnival glass, lace doilies, rusted tools, toys, books and more.

The item that most captured my attention, however, was an aged, but intact, photo album dating, I estimate, from the mid-to-late 1800s. It had heavy covers and thick cardboard pages with cutouts into which photos could be inserted. The album was filled with dozens of well-preserved carte de visites, many of them bearing photographer’s imprints from Huddersfield, Yorkshire, in the UK. I spent a long time flipping the pages and chatting to the stallholder about its origins — as someone whose most cherished possessions include old family photographs, I was affronted at the thought of someone casting off such a treasure trove of ancestors. I was even more alarmed by the fact that the stallholder knew the gentleman it belonged to, a man named Brown who lived locally. My family historian’s ‘radar’ was buzzing and I debated long and hard whether I could justify spending the $80 asking price to protect this album from falling into the ‘wrong hands’ (just whose these would be I’m not sure). Having been raised to be frugal, I walked away without the album — it seemed highly indulgent to spend that much money on someone else’s family history. But the memory of it stayed with me.

Not long afterwards, I began researching my Dow family, a maternal branch of my tree I’d not previously explored. Imagine my dismay when I discovered my great-great-grandmother was Martha Ann Brown of Huddersfield, Yorkshire! Admittedly, Brown is a common surname and I have no evidence of any of our Browns ever coming to Australia; nonetheless I was kicking myself for not having bought the album, and resolved to do so at the next Collectorama if it was still for sale.

On our return visit, although I found browsing the stalls equally enjoyable, I was somewhat distracted by my quest for The Album. Nearing the end of our visit, not having found it, I was feeling a bit deflated and was standing idly by a stall waiting for my sister and daughter. To pass the time, I began flipping through an old cigar box filled with postcards. Why? I have no idea. I had (and I use past tense on purpose) no particular interest in old postcards or in cigar boxes. Midway down the stack was a postcard lying address side up. My eye was immediately drawn to the name of the addressee — Dow, the name I had most recently been researching. Probably just a coincidence. Regardless, I looked more closely and noted the address was in Maryborough, Queensland. Our Dows were from Maryborough! My interest decidedly piqued, I checked the street — Queen Street. That’s where our Dows lived. Trying to contain my excitement, I scanned back to the name — Miss E. F. Dow — my own great aunt Eva. This was a postcard actually sent to my ancestor more than 100 years ago.

Needless to say, I was completely dumbfounded and didn’t know quite how to react to this amazing discovery. So I held on tightly to the postcard, tried to remain calm, and began carefully sorting through the remainder of the items in the box. The other postcards had been removed from an album and had brown paper stuck to the back and did not appear to have been written on. But towards the bottom of the box were two photos, both in pristine condition. One featured two young ladies attired in matching dresses and pearl chokers. These girls were unmistakably my great-grandmother Francia Dow and her sister Eva Faenza as teenagers. The photographer’s imprint, A. R. Fosbrooke, Maryborough, provided additional support for my belief that this photo was of our family members. The other photo, a portrait of a handsome young man, was taken at The Royal Studio, Belfast in Ireland. With no known Irish connection in this branch of the family, I could not place him in our family story. The only other items in the box were a couple of old pieces of correspondence relating to the Mosman Cricket Club, which I (possibly foolishly) discounted as of no relevance.

Barely able to contain my jubilance, I inquired as to the price of photo and postcard and was told $2 per item. Fearing the price would go up if I revealed the value of the items to me personally, I paid first then told the stallholder the story. She was disappointingly unenthused by our amazing tale but did manage to capitalise on our good fortune by convincing me to buy the photo of the Irishman “just in case”. It was only later that I really began to ponder on just how these items had ended up on a market stall. I was able to contact the stall holders to see if they could recall anything — discouragingly, they had little information to provide other than “most likely a garage sale on the northside [of Brisbane]”.

Second time lucky:
But the story doesn’t end there. We have continued to make regular visits to Collectorama and headed off one Saturday morning in May 2010. Had she still been alive, it would have been my Granny Mavis (née McKinlay) Davey’s 101st birthday. We had barely begun our tour of the stalls when we found ourselves at the very same one from which we had purchased the photo and postcard 12 months earlier. There, lying on the table, surrounded by other bulkier objects, was a lone photo, featuring a girl in costume, dressed as Rule Britannia. I immediately recognised it as a picture that hangs on my mother’s living room wall. Almost incoherent with incredulity, I rang Mum, tripping over my words as I asked her to describe some details of her picture to make sure I wasn’t completely imagining it. There was no doubt it was the same picture and, this time, the stallholder gifted the photo to us.

Although we had previously believed the picture to be of Granny Mavis, this discovery prompted us to study it more closely and we ultimately determined that it is actually her mother, Francia, and was most likely taken around the time of Queen Victoria’s Diamond Jubilee in 1897. The event was widely celebrated in Maryborough where Francia grew up, and in honour of which she was awarded a memorial scholarship.[3] Regardless, we were thrilled to have another copy of this picture.

The chances of finding photos of your ancestors on a market stall are slim and the chances of being this lucky twice, even slimmer. My family assure me I have used up my serendipity and should quit while I’m ahead, but it’s only made me more dogged in my examination of postcards and photos. Someone kept these photos safe for more than a century — who knows what other stashes of family photos may be lurking in the garages of strangers, just waiting for me to find them. When it comes to family history, I’m learning never to say ‘never’.

✳ Collectorama visits Nambour, on Queensland’s Sunshine Coast, four times a year. The next one is on November 5 at the Nambour Showgrounds. To find antique fairs in your area, check local newspapers and ‘what’s on’ websites.