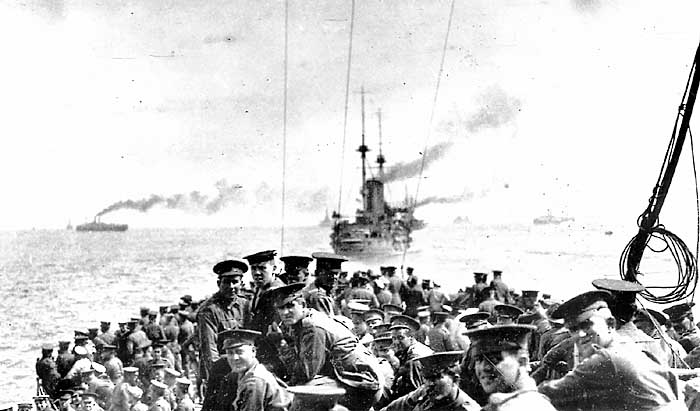 Q. From Donna: I’m interested in finding out more about the Imperial Camel Corp. My grand-uncle was part of this corp and was killed on 3/11/17 at the Battle of Khuweilfe. Do you know if any war diaries or logs are available for this battle? The camels dont seem to get much of a mention most places.
A. AWM: The Research Centre has digitised their holding of war diaries for Camel Corps units which can be viewed on our website from http://www.awm.gov.au/collection/records/awm4/11/. You can also find photographs of the Camel Corps on the Collection Search http://www.awm.gov.au/search/collections/. Jennie.
A. Donna: Brilliant! I will certainly take a look!

Q. From Peta: I have photographs of several soldiers from WWI whose photos don’t seem to be available on the AWM website. Do I have to donate those photos for them to be up up with the soldiers record or can I send copies or what is the procedure? I did not really want to part with them yet. I also have a copy of the Proclamation – in Pidgin – that was made in Rabaul after the battle up there. I have seen it in English on a website somewhere, but never in Pidgin.
A. AWM: Hi Peta, the National Archives of Australia allowed users to post photographs to their site Mapping our Anzacs http://mappingouranzacs.naa.gov.au/ to accompany the service records. There are changes happening to this site which are detailed here, http://moa-news.tumblr.com/. Photographs on the Memorial’s Collection Search are those that have been donated to us for the National Collection. General information about donating to the Memorial can be found on our website from http://www.awm.gov.au/collection/donations/.
A. Peta: Ok thanks again. I will see if I can post to Mapping our Anzacs.
Q (b): Peta: Is there any kind of recognition happening next year for the people of the Australian Naval and Military Expeditionary Force – the combined force that was despatched in August 1914 in order to neutralise German New Guinea?
Q (c): Peta: Did you find anything out about Leo James Corrigan as per my email earlier today?
A. AWM: Hi Peta, we do not have any information about identification of recently discovered bodies in France and Belgium. It looks like you already have a fair bit of information about his service, which is what we provide. I would suggest you visit the Army website for unrecovered war casualties. They have updates on identifications: http://www.army.gov.au/…/Unrecovered-War-Casualties-Army.
A. Peta: Ok – thanks. I am hoping that somehow, we might get him identified. Will look at that link.

Q. From Wendy: My great grandfather’s brother David Burge was with the 26th Bn at Gallipoli , his record mentions ‘Brigade Snipers’. Are there any books or records about Gallipoli Snipers apart from “Billy Sing”?
A. AWM: Wendy. Brigade snipers in the First World War did not operate as independent units. Instead they operated on the front lines occupied by that infantry brigade. I am not aware of any specific history of Australian snipers in the First World War, but Hesketh Vernon Hesketh-Pritchard’s book ‘Sniping in France’ provides a detailed account of the training and duties of Commonwealth snipers on the Western Front. You may be able to locate a copy of this book through your local library. You can find a list of libraries holding this book on Trove at http://trove.nla.gov.au/work/1147726…. The full text can also be viewed online through the internet archive at https://archive.org/details/snipinginfrancew00pricrich. -Cameron
A. WW1 Lost Boys: Thankyou very much , I look forward to finding it.
A. Wendy: Thanks for the link , I found one online! https://openlibrary.org/books/OL7043683M/Sniping_in_France
A. WW1 Lost Boys: From the ‘Sniping in France’ book, can you find the sniper? [see image here]

Q. From Anita: Looking for any images of Gilbert Harper Richards buried in France Villiers Bretonnuex have found Kenneth Hughes Richards, one image.
A. AWM: Anita, The Memorial’s Collection Search, http://www.awm.gov.au/search/collections/, enables you to search and view the Memorial’s photograph collection. While the collection does include many photographs of individuals we do not hold photographs of everyone who served with Australian Forces. Search for photographs using combinations of keywords that may appear in the description of the photograph, for example, surname and service number or surname and unit. If you are unable to locate a photograph of Gilbert Harper Richards in the Memorial’s collection you may also like to try searching photograph collections of other institutions. The National Archives of Australia’s collection can be searched using PhotoSearch (http://www.naa.gov.au/collection/fact-sheets/fs19.aspx) and Trove (http://trove.nla.gov.au/) can be used to search photographs and other images held by a range of major Australian libraries, archives, and other cultural institutions. Cameron

Q. From Lyn: Could you please advise where SGT Richard Rosser 3rd Battalion AIF was killed at Pozieres? An approximation to roads etc? Thanks heaps
A. AWM: Hi Lyn, looking at Sgt Rosser’s service record it appears that his location of death is unknown. Correspondence on the service record initially shows that they were unsure of the day Rosser was killed, listing between 22-27 July 1916. Later in the record his date of death is recorded as 22 July 1916. He is commemorated on the Villers-Bretonneux Memorial, which implies his remains were never recovered or identified. The war diary for 3 Battalion does provide some details of their location throughout July 1916, http://www.awm.gov.au/collection/records/awm4/23/20/. Jennie

Q. From Anne: I am interested in early casualties – before Gallipoli, in WW1. I understand William (Billy) Williams of Northcote was the first. Another Robert Bell of Richmond was another. Is there a list of early casualties please? As well is there a list of underage enlistments i.e. James Martin? Thank you. (I have found some, but believe I need to expand my keyword searches).
A. AWM: The Roll of Honour (http://www.awm.gov.au/research/people/roll_of_honour/) lists members of the Australian forces who died from the start of the First World War in 1914. There are several members of the Australian Naval and Military Expeditionary Force who were killed on 11 September 1914. The Research Centre does have a published Casualty List for 1915 that also lists wounded and missing for this year, which can be viewed in the Reading Room at the Memorial. I am not aware of a complete listing of those who enlisted underage in the First World War. Some ‘boy soldiers’ who appear on the Roll of Honour are listed on the Memorial’s website, https://www.awm.gov.au/encyclopedia/boysoldiers/. The Memorial’s people databases don’t index age, so it is not possible to search on this information. Service records will record the age they gave on enlistment but not necessarily their true age. Again it is not possible to search on the information. Jennie

Q. From IHM: Please join me in thanking the Australian War Memorial team! Thanks Jennie, Dianne, Liz and Cameron. We always enjoy our trips to the Memorial but what do you have planned that we should be excited about?
A. Peta: Thanks very much for your time 🙂
A. Wendy: Thanks team
A. AWM: Thanks! we have enjoyed the evening. In late November, our ANZAC Voices exhibition will open. It will showcase First World War letters and documents from the Research Centre’s collection. You can find out about this exhibition and some more information about First World War centenary acivities at https://www.awm.gov.au/1914-1918/
A. AWM: And of course, Monday is Remembrance Day. This year is not only the 95th anniversary of the armistice on 11 November which ended the First World War, but also the 20th anniversary of the reinterment of the Unknown Australian Soldier in the Australian War Memorial’s Hall of Memory. To mark the significant occasion, this year’s Remembrance Day Commemorative Address will be delivered by former Australian Prime Minister, the Hon Paul Keating, who delivered the poignant eulogy of the Unknown Australian Soldier in 1993. There is more information at https://www.awm.gov.au/commemoration/remembrance/
A. AWM: Goodnight and thank you for your interest!