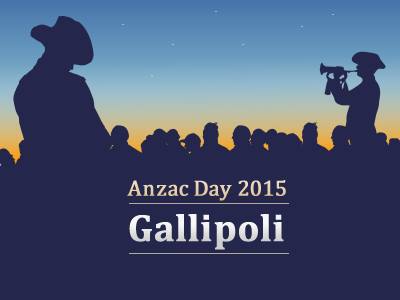 The ballot for places at Gallipoli on Anzac Day 2015 has opened!

In 2015, places will be available for 8,000 Australians, 2,000 New Zealanders and up to 500 official representatives of all countries involved in the Gallipoli campaign.

Of the places available to Australians in ballot, 2,000 will be reserved for special representatives such as direct descendants, the veteran community and secondary school students and their chaperones. The remaining 6,000 places will be for all Australians. Applicants must be aged 18 and over on or before 25 April 2015.

Widows of First World War veterans do not need to apply and will be invited separately by the Australian Government to determine their interest in attending. Places for secondary school students and chaperones will be allocated outside the ballot by state and territory governments.

Advice will be provided to individuals on the ballot outcome before March 2014, to ensure those successful have enough time to organise and pay for their trip. This will also allow tour operators time to make specific arrangements with those travellers who have secured a place.

Senator Ronaldson said that although attending Anzac Day commemorations in 2015 would be a once-in-a-lifetime experience, visitors could also consider visiting Gallipoli at another time during the Centenary year.

“The Gallipoli campaign lasted eight months from April to December 1915 – I encourage those who may not be successful in the ballot to consider visiting Gallipoli at another time in 2015,” Senator Ronaldson said.

For more information on the ballot, eligibility arrangements, and to apply from midnight 15 November, visit the Department of Veterans’ Affairs Gallipoli 2015 website www.gallipoli2015.dva.gov.au.