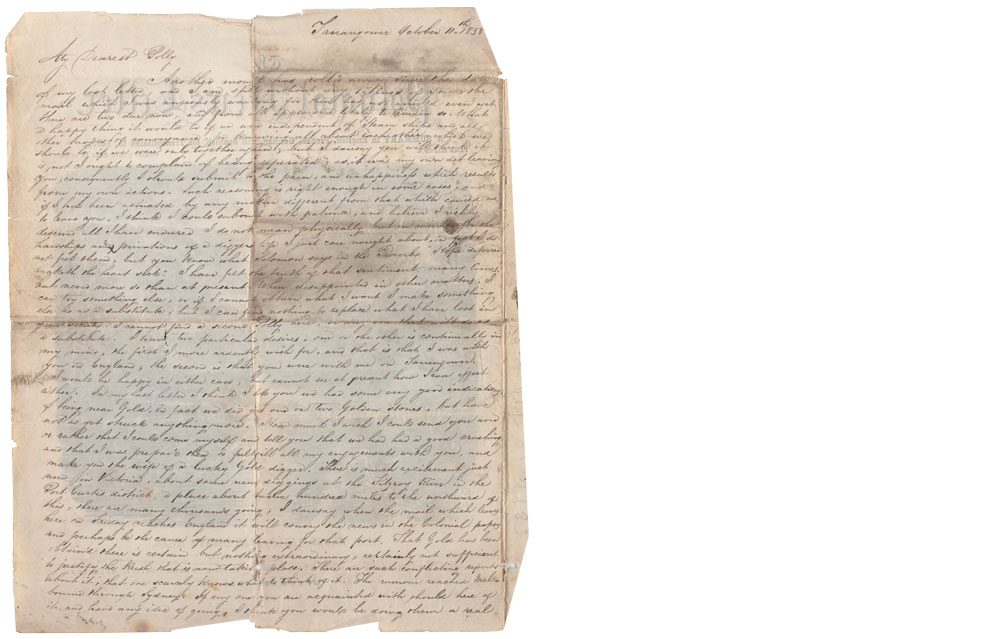 When Joanne Mahony looked into some letters from the 1800s that had been donated to the Melbourne Museum, little did she know that she’d uncover a love story conducted across hemispheres. Joanne introduces us to the players of this romance — Reuben Gatward and his “Polly” — and tells how she traced Reuben’s life.

On behalf of Melbourne Museum, I’ve recently been researching a letter and a partial letter written during the Victorian gold rush. The letters were donated to the museum from an estate in Pembrokeshire, Wales and I was asked to transcribe the letters and find out as much as I could about their writer and recipient. Little did I suspect when I began the project that I’d become a surrogate family historian for Reuben Gatward, the letter-writer, and a detective in pursuit of ‘My Dearest Polly’, the letters’ recipient.

I began my task by transcribing the letters, one of which was written on part of a short-lived, little-known multi-lingual illustrated newsletter called The Polyglot. These transcriptions gave me the clues I needed to begin my research. Each letter was signed ‘R. Gatward’ and was written to ‘Polly’ (a commonly used nickname for those called Mary), his betrothed, who was living in Luton, Bedfordshire. His letters made mention of people and places in Luton as well as what he and some of his shipmates had been doing since arriving in Australia.

As one of the letters was dated October 1858, I searched through shipping records and passenger lists to discover that a Reuben Gatwood (not Gatward) had arrived in Australia in 1852 as an unassisted passenger aboard the Statesman. By cross-checking the names of the shipmates mentioned in his letters, I was able to confirm that, despite the difference in spelling of the surname, the writer of the letters was, indeed, Reuben Gatward, aged 26 years (formerly a draper’s assistant according to his letters, despite being listed as a farmer on the Statesman’s passenger list!).

I then used DiggerTM to find out what I could about Reuben and discovered that he died in Charlton, Victoria on 2 February 1900. He had been born in Hertfordshire and was the son of Benjamin and Elizabeth Gatward.

Armed with this information, it was time to investigate the 1851 UK Census. There I found Reuben Gatward, single, aged 24 years, born in Hitchin, Hertfordshire, working as a draper’s assistant in Luton, Bedfordshire and living at 5 George Street Luton with a draper, the draper’s family, two other draper’s assistants and three female servants. Interestingly, one of the servants was a 17 year girl named Mary H Hobbs. Could this Mary be Reuben’s Polly?

Despite extensive searching and finding a Mary H. Hobbs who married in Cardiff, Wales in late 1862, I was unable to identify Polly. I contacted the letters’ donor with what information I had about Mary Hobbs but he, unfortunately, found no links between Reuben or Polly and his family. How the letters came to be in Wales will remain a mystery for now, as will what became of Polly. The partial letter, written in April 1853, tells of Reuben’s hopes of quickly finding enough gold in Australia to ensure that he could return home to marry his love; sadly, that wasn’t to be and he ended up staying in Australia for nearly 50 years, until his death in 1900, and he didn’t marry until 1890 when he was 64 years old.

My next attempt to find out more about Reuben involved searching the Public Record of Victoria (PROV) Wills and Probates index, where I found three separate documents linked to his death.

From these, I learnt that he had worked as a Commission Agent, run a successful business, and that his wife’s name was Sarah (née Pyers). It was then back to DiggerTM to find information about Reuben’s marriage to Sarah and whether or not they had had any children. By this time, I was feeling quite responsible for telling Reuben’s story and was hoping to be able to share what I knew with a direct descendant if one could be located.

It seems that Reuben and Sarah had no children so I began searching for further information about Reuben through directories, Trove, rate books and local historical societies. I discovered that Reuben had managed a sizeable local emporium for a number of years before starting his own ‘fancy repository’ business in East Charlton, Victoria, in around 1885. He still owned this business 15 years later, at the time of his death, so, assuming that he was a reasonably well-known local identity and having gleaned his exact date of death from his will documents, I began reading the local Charlton newspaper in the hopes of finding some mention of his death and, perhaps, further leads about his life or family members. I was quickly rewarded by a lengthy obituary in the paper on the day following his death as well as learning that he had been a gold miner for many years, even opening a gold seam called the Corella Reef in 1860 and that he had lived in Wedderburn, Victoria — not far from Charlton — for many years.

In his obituary, mention was made of Reuben’s father, Benjamin, being a renowned Baptist minister in Hitchin, Hertfordshire. It was also noted that he had a great nephew and great niece living with him at the time of his death. Through further online searching of various genealogy websites and the internet more generally, I discovered that Reuben was the youngest of 17 children. Armed with the names and birth/death dates of Reuben’s siblings, I was able to trace them with the help of some very kind Gatward descendants. A further clue was supplied in a list of ‘Gatward’ newspaper articles generously provided by the Charlton Historical Society, which revealed that Reuben’s great nephew was probably named Wilkie.

After following various Gatwards from the UK to Australia, New Zealand and Fiji,I eventually made contact with Wilkie’s grandson. He told me that Wilkie and his sister, Nellie, had been born in Fiji and sent to Australia for their education. It seems that they may have lived with Reuben and Sarah for many years. I had found the closest thing to a direct descendant of Reuben’s that was possible!

What began as providing a little background to two old letters turned out to be an immensely rewarding and interesting journey through someone else’s family history and, despite the fact that I couldn’t find Polly, I found an extensive group of descendants with a rich and varied history and I was able to introduce them to Reuben, a long-lost family member.

More information about the Gatward letters can be found on the Museums Victoria website at http://museumvictoria.com.au/collections