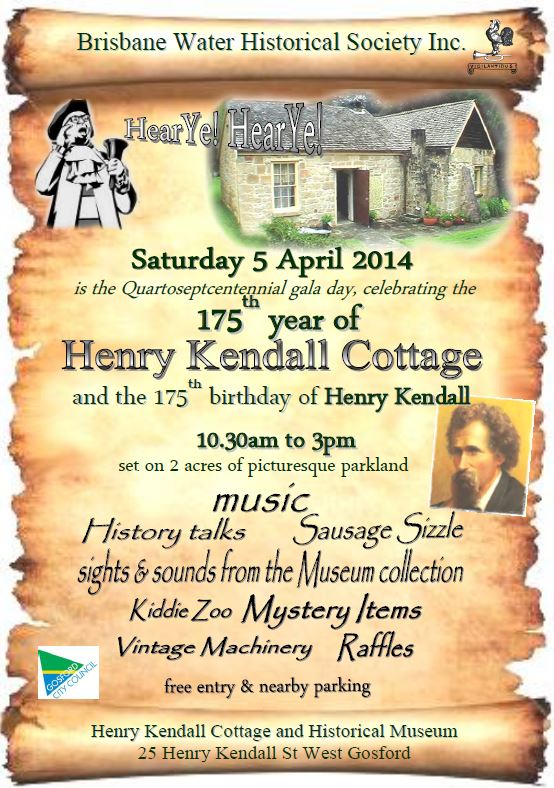 History talks on the day will be presented by:

Visitors can tour the Cottage, Museum and picturesque grounds and discover fascinating stories of our local history. Highlights on the day also include performances by the Conservatorium of Music and the Wheeze & Suck Band, bush poetry, book-launch, an art-in the garden competition, mystery items, raffles, great local catering, visits from National Parks and Wildlife, the local Machinery Club, Lace-makers and Wood-Turners Co-ops, and fun activities for the kids such as face-painting, a mini-reptile display and Kids Zoo.

The Brisbane Water area has only a small number of buildings surviving from the 19th Century. One of these is the second oldest building known as Henry Kendall Cottage.
Original owner, Peter Fagan, was an Irish convict who was transported to Sydney in 1821. When Fagan had served his time of seven years he was given a 100 acres grant of land in the Brisbane Water area and began farming and raising cattle. In 1836-40 he built a small cottage on 60 acres at West Gosford made from locally cut sandstone blocks with convict labor. Fagan called the cottage ‘Cooranbean’ (which means the creek that winds) and in 1840 was given a license to conduct an Inn. He named it ‘The Red Cow Inn’. Separate buildings contained a kitchen, dining room and separate bedrooms but these were burnt down in 1901. Peter Fagan and his wife Margaret raised a family of seven sons and two daughters.

Henry Kendall, born in 1839 in Ulladulla, was one of the leading poets of his time. He had a love for the works of nature, for the trees and birds and animals of the Australian bush. He expressed this in many beautiful verses. Many of his poems were inspired by the Brisbane Water district. About 1873, Kendall passed through Gosford on his way to Sydney from the North Coast and befriended Fagan and his brothers. The Fagan family cared for this early poet who was in very ill health and circumstances. While staying in a little room at the existing family cottage, Kendall’s health improved and inspired by the beautiful scenery of the district resumed writing his verse. He is best known for his iconic poem “Bellbirds”.

Col. Garnet Adcock was the second owner of the cottage, purchasing the land from Joe Fagan in 1921. Adcock, an engineer and chemist had considered setting up a perfumery business on his land though instead turned his genius to using an emulsion extracted from the skin of the citrus fruit grown extensively in the area as a flavor for cordials. His business ‘Jusfrute’ thrived but in 1982 saw the end of the citrus era. Adcock developed the land around it, pioneered a significant business enterprise near it, and contributed to the cottage’s preservation until his passing in 1956. The cottage under threat of demolishment set on 2 ½ acres was then purchased by the Brisbane Water Historical Society in 1960 from Adcock’s son, Van.

The Brisbane Water Historical Society was formed in 1950 and was accepted as an affiliate of the Royal Australian Historical Society (RAHS) and the National Trust Australia NSW Branch. The Society is the sole owner of the heritage listed cottage. In the first three years as caretakers of the cottage, loyal Society members undertook a huge project that saw the cottage restored, electricity installed and the grounds beautified. In 1963, the Society was then granted permission to open the cottage as the ‘Henry Kendall Cottage Historical Museum of the Pioneers’.

A second Museum building was opened in 1983 as the museum’s collection and following had grown so large. Trade tools and farming machinery that tell the story of Gosford’s pioneering history are also seen in display sheds around the picturesque grounds. Items seen in an early ‘laundry’ or wash-house and the kitchen are also charming reminders of days gone by. It has been through the valiant efforts of many people that ‘Henry Kendall Cottage’ has been able to endure the passing of time.