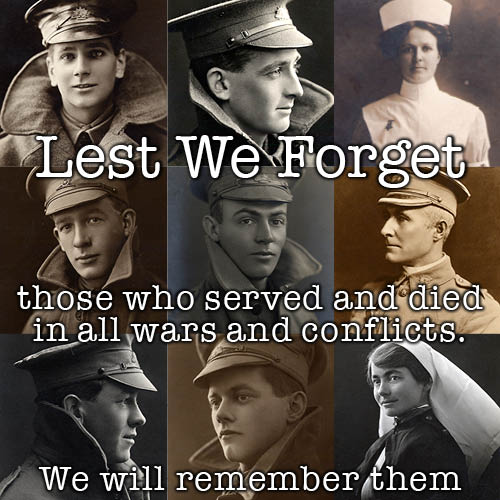 ANZAC Day developed from the commemoration of the Australian and New Zealand soldiers who lost their lives on Gallipoli during the First World War. Although the campaign failed, the endurance and sacrifice of those soldiers led to the creation of the “ANZAC legend”. Over the years, ANZAC Day has broadened to include the commemoration of all men and women who have served for Australia in war and peace. The Australian War Memorial explains the history of ANZAC Day, it’s symbols and ceremonies.

Rosemary:
Rosemary became an emblem of both fidelity and remembrance in literature and folklore. Traditionally, sprigs of rosemary are worn on ANZAC Day and sometimes on Remembrance Day. Rosemary has particular significance for Australians, as it is found growing wild on the Gallipoli peninsula.

Red Poppies
The Flanders poppy has long been a part of Remembrance Day, the ritual that marks the Armistice of 11 November 1918, and is also increasingly being used as part of ANZAC Day observances. During the First World War, red poppies were among the first plants to spring up in the devastated battlefields of northern France and Belgium. In soldiers’ folklore, the vivid red of the poppy came from the blood of their comrades soaking the ground. The sight of poppies on the battlefield at Ypres in 1915 moved Lieutenant Colonel John McCrae to write the poem In Flanders fields (see “The recitation”). In English literature of the nineteenth century, poppies had symbolised sleep or a state of oblivion; in the literature of the First World War a new, more powerful symbolism was attached to the poppy – the sacrifice of shed blood. The poppy soon became widely accepted throughout the allied nations as the flower of remembrance to be worn on Armistice Day.

The Australian Returned Soldiers and Sailors Imperial League (the forerunner to the RSL) first sold poppies for Armistice Day in 1921. For this drive, the league imported 1 million silk poppies, made in French orphanages. Each poppy was sold for a shilling: five pence was donated to a charity for French children, six pence went to the League’s own welfare work, and one penny went to the League’s national fund. Today the RSL continues to sell poppies for Remembrance Day to raise funds for its welfare work. The poppy has also become very popular in wreaths used on ANZAC Day. An early instance took place in Palestine, where poppies grow abundantly in the spring. At the Dawn Service in 1940, each soldier dropped a poppy as he filed past the Stone of Remembrance. A senior Australian officer also a laid a wreath of poppies picked from the slopes of Mount Scopus.

Poppies adorn the panels of the Memorial’s Roll of Honour, placed beside names as a small personal tribute to the memory of a particular person, or to any of the thousands of individuals commemorated there. This practice began at the funeral of the Unknown Australian Soldier on 11 November 1993. As people waited to lay a single flower by his tomb in the Hall of Memory, they had to queue along the Cloisters that house the Roll of Honour. By the end of the day, hundreds of RSL poppies had been pushed into the cracks between the panels bearing the names of the fallen.

Riderless horse:
ANZAC Day marches and other memorial parades are often led by a lone, riderless horse, with a pair of boots set backwards in the stirrups and the saddle stripped. Ancient peoples, such as the Saxons and Scythians, used to bury a great warrior’s horse with him so that it could serve him in the afterlife. This practice was continued in some European countries until the late eighteenth century. In modern times, custom has been kinder to the horse, which has been led in its master’s funeral procession with his boots reversed as a sign that a warrior has fallen in battle. A riderless horse has been added to some ANZAC Day parades as an additional symbol of respect and mourning, often for the men of Light Horse units.

Reversed arms:
The tradition of reversing and resting on arms – that is, leaning on a weapon held upside down – has been a mark of respect or mourning for centuries, said to have originated with the ancient Greeks. Descriptions of sixteenth-century military funerals provide the earliest documented instances of carrying arms reversed in more recent times. Although Australian soldiers still rest on arms
as a mark of respect for the dead, the short Steyr rifle, the present Australian service rifle, is difficult to carry reversed.

Flags at half mast:
The tradition of lowering flags to half mast as a sign of remembrance is believed to have its origins on the high seas. As a sign of respect or honour for important persons, sailing ships would lower their sails, thus slowing the vessel and allowing for the VIP’s own vessel to come alongside and for him to board if so desired. Lowering of sails was also used to honour VIPs who were reviewing a naval procession from the land. In time only the ship’s flags were lowered in a symbolic gesture. This practice was also adopted on land. It is today a universal symbol of respect and remembrance. During the National Ceremony the flags begin at half mast and are raised to the mastheads during the Rouse.

Laying of wreaths:
Flowers have traditionally been laid on graves and memorials in memory of the dead.

In recent years, the poppy, strongly associated with Remembrance Day (11 November), has also become popular in wreaths on ANZAC Day and as a sign of commemoration when placed on the Roll of Honour or the Tomb of the Unknown Australian Soldier.

The recitation, including the Ode:
In most ceremonies of remembrance there is a reading of an appropriate poem. One traditional recitation on ANZAC Day is the Ode, the fourth stanza of the poem “For the fallen” by Laurence Binyon (1869–1943). This poem has been recited in ceremonies since 1919, including the Memorial’s inauguration in 1929, and at every ANZAC Day and Remembrance Day ceremony held at the Memorial.

The Last Post is the bugle call that signifies the end of the day’s activities. It is also sounded at military funerals to indicate that the soldier has gone to his or her final resting place, and at commemorative services such as ANZAC Day, Remembrance Day, and at the Last Post ceremony held each day at the Memorial.

A period of silence:
Silence for one or two minutes is included in the ANZAC Day ceremony as a sign of respect and a time for reflection. One minute’s silence was first observed in Australia on the first anniversary of the Armistice and continues to be observed on Remembrance Day, 11 November. Over the years, the one minute’s silence has also been incorporated into ANZAC Day and other commemorative ceremonies.

The Rouse and the Reveille:
After the Last Post and one minute’s silence, flags are raised from half mast to the masthead as the Rouse is sounded. Today it is associated with the Last Post at all military funerals, and at services of remembrance.

The lone piper:
The bagpipes are the traditional instrument of the people of the Scottish highlands and have been carried into battle with Scottish soldiers, from the days of William Wallace in the fourteenth century
to the Falklands War of 1982. Traditionally, in Scottish units a lone piper takes the place of a bugler to signal the day’s end to troops (see Last Post) and also bids farewell to the dead at funerals and
memorial services. The ceremonial presence of a piper became established in Australia during the 1920s.