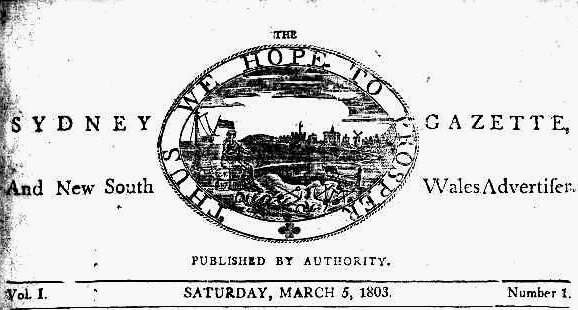 Over 4.5 million pages of historical newspapers are now fully searchable online as part of the State Library of NSW’s major initiative funded by the NSW State Government to fast track the digitisation of its entire newspaper collection. This first major milestone in the State Library’s extensive $22.4 million digitisation program is providing local and global audiences with free online access to over 250 NSW newspapers titles, with additional issues being digitised and made available every week.

Some newspaper highlights in the 250 plus NSW titles now online:

Now is the time to get searching on your computer, mobile or tablet, you never know what you’ll find. We’ve found our family listed in the papers from the very start of the colony and some amazing pieces of social history along the way! From The Sydney Herald, on Monday, July 11, 1831:

The total number of Newspapers printed in Great Briain amount to 295, of these 72 are printed in London only, 13 of which are daily, and 24 weekly.

The Use of a Hat – It ought to be known as generally as possible, that a man’s hat will serve in most cases as a temporary life-preserver, to persons in hazard of drowning, by attending to the following directions: – When a person finds himself in, or about to be in the water, let him lay hold of his hat between his hands, laying the crown close under his chin, and the mouth under the water. By this means the quantity of air contained under the cavity of the hat will be sufficient to keep the head above water for several hours, or until assistance can be rendered.

Under the Library’s Digital Excellence Program more than six million pages of historical New South Wales newspapers will be accessible online on the discovery service Trove, in partnership with the National Library of Australia, building the largest collection of digitised newspapers in Australia.

The State Library will continue to work with the National Library of Australia, NSW public libraries and historical societies to make the State Library’s collection of more than 2,000 newspaper titles available online for the people of NSW and beyond.

Through the Digital Excellence Program we’re providing a rich digital chronicle of our past that can only be found in newspapers. Our extensive collection includes Australia’s first newspaper, The Sydney Gazette and New South Wales Advertiser, as well as little known titles from remote areas of NSW with only a few issues.

In the lead up to the centenary of World War I, the Digital Excellence Program has focused on digitising runs of NSW newspapers from rural and regional areas that were published during the years spanning the Great War (1914 – 1918). In addition to NSW newspapers, a State Library team of expert librarians has identified the most in-demand, fragile and valuable items from across the collection for digitisation, such as the Library’s collection of 1,100 World War I personal diaries which will be featured in a major exhibition from July.

Other projects include an initial selection of the books given by David Scott Mitchell, irreplaceable oral histories and fragile photographic negative collections. All will be gradually made available on the State Library’s new website when it is launched later this year.

Digitisation is enhancing the way people use libraries and collections and we’re thrilled to be providing unprecedented, world wide access to most iconic and historically significant documents and objects of our state and nation, says Dr Byrne.