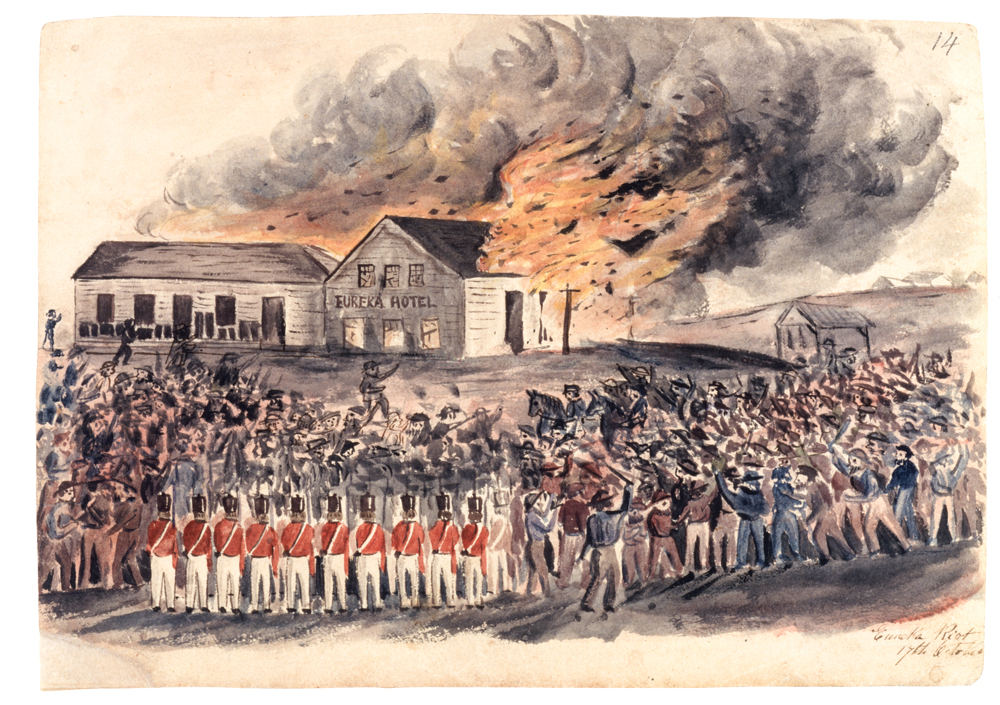 Women didn’t fight in the Eureka Stockade – or did they? NIB Waverly Library Award winner for 2014 Clare Wright chats to Sarah Trevor about restoring women’s place in Eureka and beyond.

What attracts you to stories about women in Australian history?

I’ve always been drawn to the margins. Women are not in themselves marginal, but their actions, ideas and opinions are considered unimportant or trivial. Of course there’s a political aspect to the process of bringing a gendered perspective to history but, as a woman, I’m also just plain fascinated in how women before me have lived. What motivated them, what made them get up in the morning, what they had for breakfast, why they became agents of change in their own lives and the lives of their communities.

In The Forgotten Rebels of Eureka, you examine the role that women played in goldfields history and the Eureka Stockade. Of all the personal stories you explored, which ones affected you the most?

I’m most personally affected by the story of Catherine Bentley, the proprietor of the Eureka Hotel. It’s fair to say I became obsessed with rooting out the details of Catherine’s tragic life. She sailed to Victoria from Northern Ireland with her sister as a young and ambitious woman, married an ex-convict who had managed to make influential friends in Melbourne, purchased the pre-emptive right to a parcel of land on the Eureka Lead and received the first licence to sell alcohol on the Ballarat diggings.

Then in a matter of days the whole dream came crashing down around her as her empire literally went up in smoke. She was then homeless, tried for murder (heavily pregnant and with a toddler), watched her husband be incarcerated and was forced to sly grog to keep herself afloat. The details of her subsequent family life involve suicides, ex-nuptial pregnancies, court appearances, the violent death of one child and loss of another baby to common disease. Catherine was a pioneer, a loser, a fighter.

What resources did you find most useful when researching these women?

For the most part I went back to the same archive that other historians have previously used to research Eureka: newspapers, Royal Commissions, official correspondence, letters, diaries, memoirs and published firsthand accounts of the people who were in Ballarat in 1854.

But I scoured the records with a different set of questions, and therefore found different answers. So, for example, in the Ballarat newspapers I looked at the advertisements of the many traders. I found that one pharmacist was selling breast pumps. That little detail throws up a whole range of questions, because clearly there were enough women on the diggings to make this a marketable commodity, and the women who largely require a breast pump are ones where lactation is not proceeding smoothly — either the baby has died, is too weak to suckle properly or the mother has mastitis (and in the mid-19th century, ‘milk fever’ could kill). Suddenly the goldfields start to look different from the stereotypical image of an all-male terrain of hustlers, ramblers and rags-to-riches entrepreneurs.

The goldfields become places of domestic as well as commercial industry. And as the adverts for the theatres and other businesses clearly demonstrate, the gold rush also attracted plenty of female entrepreneurs and self-made women to Australia!

What are your best tips for researching the lives of overlooked figures from history?

Have another look at the archives. Dig deeper. Think laterally. Bookmark the Births, Deaths and Marriages registers. Very often women’s voices are to be found as witnesses at coronial enquiries. And a heap of other tiny fragments of detail besides. From the snippets, slivers, murmurs and hints you will piece together a new and compelling portrait of the past.

The Forgotten Rebels of Eureka (Text Publishing, $34.99) is out now.