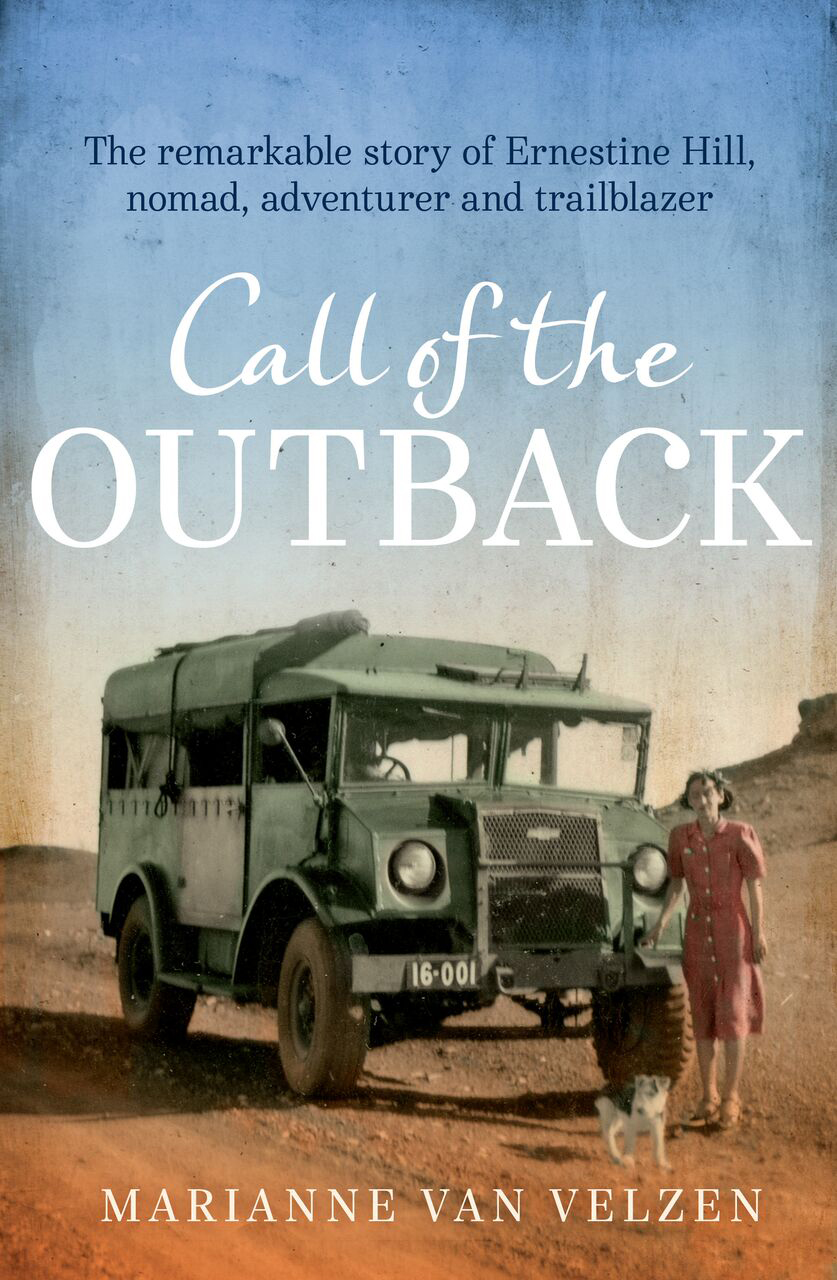 In Call of the Outback, Marianne van Velzen shares the story of intrepid journalist and trailblazer, Ernestine Hill, who swapped a comfortable urban life in 1930s Sydney and Hobart for a nomadic existence in the outback. In this extract from the book, Marianne looks at Ernestine’s collaboration with the larger-than-life Daisy Bates during a sojourn in Adelaide.

In May 1935, Daisy Bates emerged from The Ghan in a black frock, lace blouse and white lace gloves, a mirage from the desert, as mystifying as ever. Ernestine had no conception then of the amount of work that was about to fall upon her, nor of the almost impossible conditions under which it would have to be done. She did know, however, about Daisy’s distrust of collaboration.

In 1910 Daisy Bates had taken part in an otherwise all-male anthropological expedition under the leadership of Professor AR Radcliffe-Brown. She had been appointed a travelling protector tasked with inquiring into various Indigenous issues, such as employment on stations, guardianship and ‘the morality of native and half-caste women in towns and mining camps’. Later she accused Radcliffe-Brown of publishing some of her findings as his own discoveries.

So Ernestine had downplayed her own intended role: ‘It must be your book… no other person must intrude,’ she had written in her attempt to persuade Daisy to leave her tent. She also stressed that all expenses the move incurred would be paid for. ‘I cannot live in a town on less money than 400 pounds a year,’ Daisy had once written, and then she had added that she saw no middle ground between that kind of a life and the basic existence of tent life. It was perhaps understandable, therefore, that once in the city, the small demanding lady would begin to live a life of extravagance.

Adelaide was happy to pay her homage. Due to the articles Ernestine and other journalists had written about her, Daisy had become quite a celebrity, and every newspaper now found an excuse either to interview her or to write about her. Everyone seemed to want to be photographed with her or to ask her for her autograph. She had been regarded by some as a crank, but now she became a star, and she behaved and was treated accordingly. Her eccentric manner and appearance, once ridiculed, were now regarded as enchanting.

Daisy loved the attention. She had been in the desert for 16 years, with so few visitors that she could call them “joyous little interruptions from my own kind”. Having to live for years on no more than 10 shillings a week had robbed her of the bare necessities of life.

Indulging in the luxury of the Adelaide Hotel, she took long soaking baths, attended every social event held in the city, and was hailed day and night by bellboys and hotel staff. She had flowers, letters and notes delivered to her room daily, and with the money that jingled in her purse she bought whatever she desired, although it was mostly presents for others.

Ernestine looked on with some surprise as her friend Daisy Bates turned from solemn to frivolous in a matter of days. Since The Advertiser was paying, Daisy ordered only the best for her guests. Meanwhile, the actual purpose of her stay in Adelaide — to write a series of articles — seemed to have slipped her mind completely.

With growing alarm, Ernestine remembered Dumas’s statement that the whole project would be her responsibility. She tried to get Daisy back on track, but she also felt some compassion for her and did not have the heart to call a halt to her new and lavish lifestyle just yet.

During those first weeks the two of them had an enjoyable time, drinking tea with Ernestine’s friends while Daisy told hair-raising or hilarious stories about her life in the desert. Daisy particularly loved to visit Alys Truman, one of Ernestine’s friends, who wrote a weekly women’s column in The Chronicle under the byline Beetee. When they visited, Daisy would insist on cream cakes; she had been deprived of cream for so many years, she would lament. Alys, in return, loved Daisy’s presence and her genteel, cultured, old-world demeanour, so they spent many hours eating cream cakes and drinking tea at the Chronicle’s offices.

But there was work to be done and, when Ernestine cautiously began to remind Daisy about this obligation, the older woman just looked at her young friend with an air of surprise as if she had forgotten the reason for her move to Adelaide. ‘Daisy found the manual labour of typing and editing too depressing… So method and manner of writing were left to Ernestine.’ Ernestine returned to her desk and started to work through Daisy’s notes, some of which were written on scraps of paper or pieces of cloth. There were diaries full of Aboriginal words, anecdotes and faded newspaper clippings of articles she had written, all in such a jumbled state that it was almost impossible to shape or structure them into a readable form. So Ernestine asked Daisy to join her at the Advertiser’s office in the mornings to tell her tale in her own words so she could begin to un-jumble the chaotic state of the notes.

To Ernestine’s surprise, in a matter of days Daisy managed, with little effort, to set aside her frivolous life during the mornings. She would arrive at the office every day at exactly half past nine, using the stairs instead of the lift, alert and ready to read Ernestine’s copy. They were crammed into a tiny office space, but Daisy never complained.

Ernestine regretted that her own literary aspirations would have to be set aside for the time being. Her ideas and notes now made way for the tales of the iconic figure who entered her office every morning.

The first of a series of 21 articles resulting from Ernestine’s collaboration with Daisy Bates started to appear in The Advertiser on 4 January 1936 under the title ‘My Natives and I’. The articles were syndicated to the Melbourne Herald, Sydney Sun, Brisbane’s Courier-Mail and Perth’s West Australian, and so were read throughout Australia. Daisy Bates became a household name. As had been agreed, none of the published articles carried Ernestine’s name.

Read the full extract in the latest edition of Inside History. Call of the Outback by Marianne van Velzen (Allen & Unwin, $32.99) is on sale now