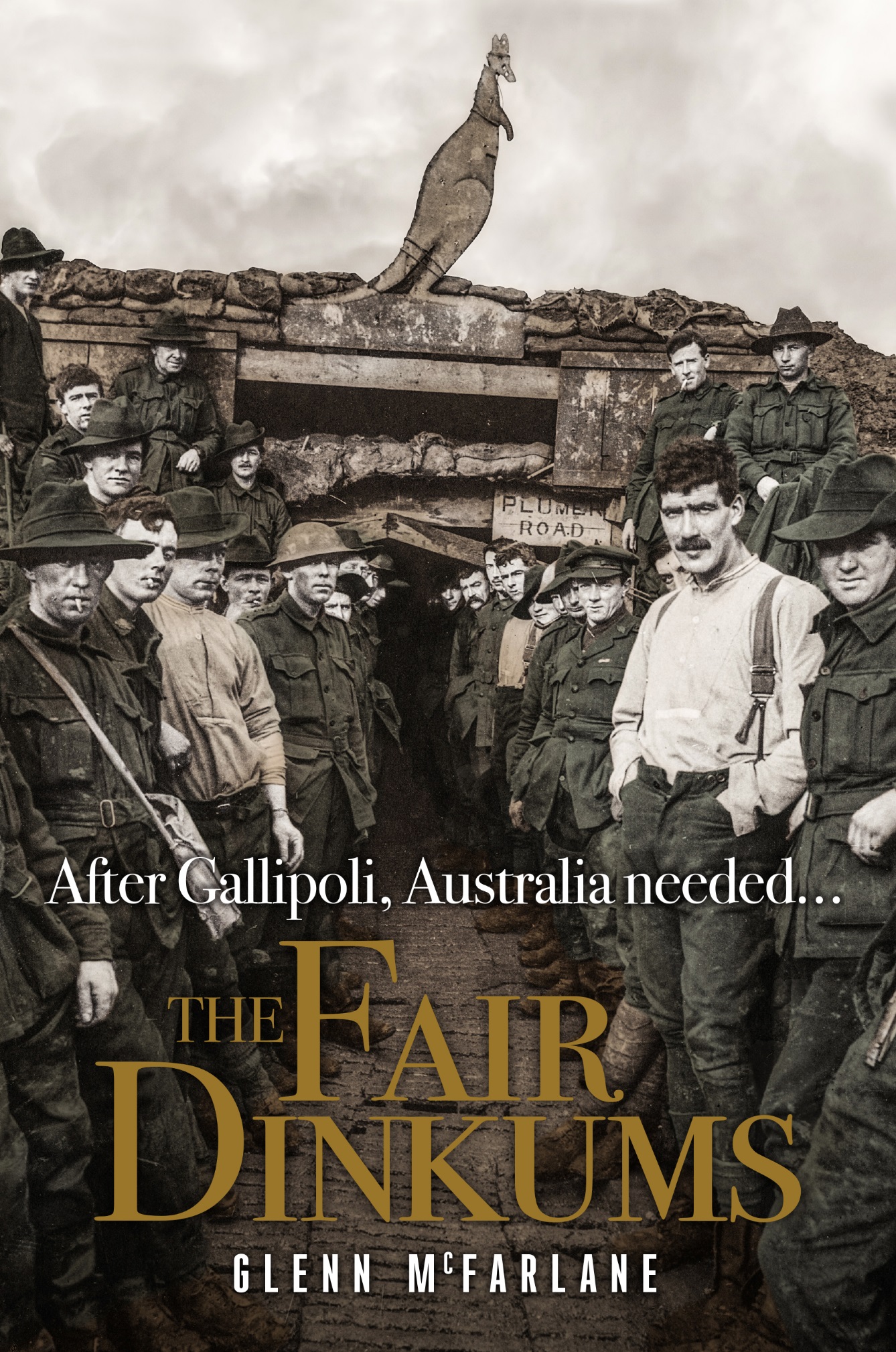 Enlisting after the horrors of Gallipoli hit home, the ‘Fair Dinkums’ were Anzac’s second wave. Inspired by a family connection to one such ‘Fair Dinkum’ soldier, journalist and author Glenn McFarlane set out to investigate their lives at war and beyond. The Fair Dinkums (MacMillan Australia, $34.99) is the result.

IHM: What initially drew you to the story of the Fair Dinkums?
Glenn: I first read the letters of my great-uncle Alf Layfield when I was about 15 and it developed a real passion for finding out more about his short life and the men who served with him. I shared a birthdate with him and felt as if I had come to know him through his letters. It set off an idea in my head many years ago to trace the stories of the men he went away with, and what became of them. The more and more I delved into it, and the more I came to know their families, the more convinced I was that someone had to tell their stories. They were a cross section of young men, and a few older ones, whose simple, ordinary lives became extraordinary. I was fascinated to find out about their lives before the war and, for those who survived, what happened to them after the war.

IHM: Your book focuses on the Anzac’s second wave of enlistees who signed up after the horrors of Gallipoli – how much was known about what those before them had faced?
Glenn: My men from the 8th Reinforcements of the 7th Battalion knew what they were heading into. By the time most of them enlisted – predominantly from May to July 1915 – the chaos of Gallipoli was well and truly stamped on the Australian psyche. There were appalling casualty lists and few Australians were untouched by the war on a personal level. The day before the ‘Fair Dinkums’ left Port Melbourne on August 26, 1915, a hospital ship carrying 200 wounded, sick or maimed Victoria as well as 200 from other states arrived on the same pier. It was covered extensively in the newspapers and the ‘Fair Dinkums’ were well aware that they were sailing off to a brand new war.

IHM: The Fair Dinkums traces not only the soldiers’ experiences at war but also before and afterwards. What made you decide on this more biographical approach?
Glenn: We are so very lucky as a nation to have many great writers and historians document Australia’s involvement in all of our wars, including the meticulous World War One correspondent Charles Bean. We know so much about the battles and the men who bravely led and fought in the battles. And there has always been a strong emphasis on the first Anzacs to enlist and fight.

But I wanted my book to be something very different and hopefully it is. I wanted to hone my focus on a group of young men who enlisted, knowing full well what they were sailing into. I wanted to try and understand their motivations, and how it impacted on their lives. In doing so, I was keen to document their experiences, but also the experiences of their families back home as well. Some of the most poignant moments in the book centre on the families left back in Australia

IHM: Could you tell us a bit more about your great-uncle, the Smiling Boy?
Glenn: As I mentioned, I read my great-uncle’s letters when I was a teenager, and wanted to know more about him. His letters gave me his voice, and I was so keen to let his voice play an active part in this book, almost a century on from his death, a month before his 20th birthday.

He was always spoken about in hushed tones in our family and I’ve held his photo with his mother dear to me. His sister was my grandmother, and she never read Alf’s letters until the last night of her life, which is incredible. I just felt a connection to Alf, and through his letters.

He was a man of decency in a world gone mad, and the story of how he began playing piano and drew a crowd of locals into a disused French church just before his death still gives me goosebumps.

Writing the passages about his death were among the hardest things I had to do with this book, but somehow I felt as if he dragged me through. They called him ‘The Smiling Boy’, and incredibly when I came across the Red Cross reports of his death, one of them mentioned that even in death, he seemed to have a smile across his face. His battle was over.

IHM: Did you grow up hearing his story?
Glenn: Yes, my grandmother and mother first introduced me to Alf more than 60 years after his death, and it was always something we spoke or and commemorated as a family on Anzac Day. That has been the beauty of this book. We have been able to unearth many things we never knew about Alf, and that’s great for our family and for my kids. That included the fact that he and some of the other ‘Fair Dinkums’ were among the last men left on Gallipoli – even though they only arrived at the curtain-call of the campaign. So we knew plenty of details about Alf through his letters, but got to know so much more about his experiences, through the eyes of his mates as well.

IHM: Was there any information or personal stories you uncovered that stopped you in your tracks, or touched you personally?
Glenn: There were countless discoveries and personal stories touched me personally. What struck me is that every man among my 152 ‘Fair Dinkums’ had his own touching story, but some of them deeply affected me.

Finding almost 100 letters from Bill Scurry (the man who invented the drip-rifle for the Gallipoli evacuation) was amazing, and thanks to the Scurry family I was able to use them extensively in the book. One of the letters he wrote just after the Armistice explained how Bill’s fiancee had reneged on the marriage after four long years was extraordinary. He met his future wife on the boat ride home in 1919.

To find letters written by Fred Hoad, who was captured by the Germans at Pozieres, from his prison of war camp was not only touching but insightful.
To hear the stories of how families were told their missing sons had been found alive months after the battle of Fromelles, only to be corrected that they were actually dead after all, was heartbreaking. Even travelling down to Apollo Bay to speak with relatives of two of the ‘Fair Dinkums’, only to find that the men were buried side by side in the most picturesque cemeteries was amazing.

IHM: Which resources did you find most helpful in the course of your research?
Glenn: I’m forever grateful for so many people in assisting me with this book, and primarily, it was the many families of the ‘Fair Dinkums’ who assisted me with their stories, their photos and their recollections. I cannot thank them enough.

Other great resources included the Australian War Memorial, the National Archives of Australia, and the great collection of old newspapers on Trove. There is a veritable wealth on information out there on men who served in the war, which is incredible.

IHM: What would be your top tips for researchers who want to learn more about their ancestors’ or relatives’ experiences in the Great War?
Glenn: The first starting point should always be Australian War Memorial and the National Archives of Australia. Each of the Australians to have served in our wars have their information recorded and registered through these great resources. The beauty is so much of it is available online these days, though a visit to Canberra is highly recommended for anyone wanting to delve further in their relatives’ experiences.

Trove is also a great resource, as I was able to find many letters from my men and also some photographs as well. Family recollections, though, are also priceless.

IHM: If you could track down one thing you haven’t yet managed to find out, what would it be?
Glenn: The biggest unsolved mystery for me was the story of Les Wood, a compositor from Brunswick, who was a model soldier until he disappeared off the face of the map while on Blighty leave in London. He spent the final day of his leave with his brother, Harold, and the two men parted, not knowing if they would ever meet again. That was the last anyone ever heard of Les. He didn’t report back for duty and was officially listed as having deserted. His family insisted that he would never have done that, and was murdered in London. The men who served with him were of the same opinion that he would not have shirked his duty. Many of the ‘Fair Dinkums’ were “lost” in battle, and that was hard enough. But the story of Les Wood remains a mystery a century on. He is still listed as having deserted.