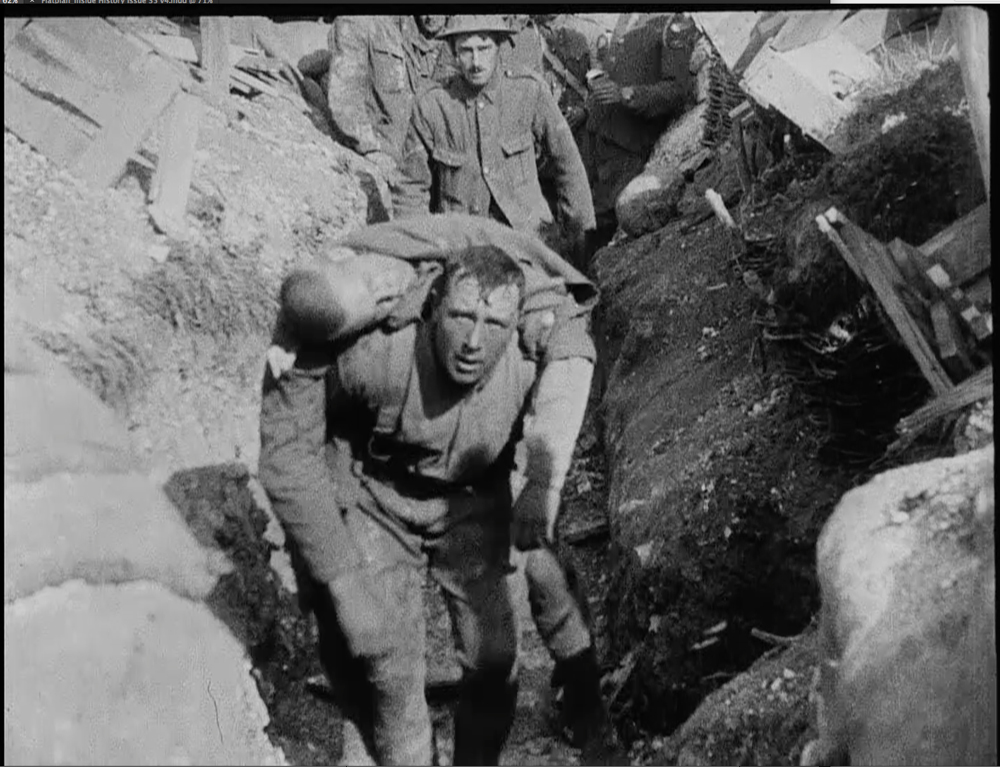 Home > Blog > Featured > The 1916 film The Battle of the Somme: Who is this mysterious hero?

It’s not often we get to see authentic footage from the First World War. Watch an excerpt of The Battle of the Somme, an iconic British film captured amidst the battle on the Western Front in 1916. Military expert Matt Lee, from the Imperial War Museums in Britain, explores one particular section of the film where a wounded soldier is rescued from no man’s land under shellfire. The identities of the rescuers has long frustrated historians, as Matt explains in this excerpt from the Winter 2016 edition of Inside History magazine.

One of the most famous images from the collections of the Imperial War Museums (IWM) captures a few seconds from one of the most well-known battles in British military history — the Battle of the Somme.

This still is taken from a sequence of footage that originates from the 1916 film, The Battle of the Somme. It was originally seen by millions of cinemagoers in 1916 and sequences from the film are now widely seen on television and online. This iconic sequence lasts for around six seconds and shows a soldier carrying a wounded comrade on his back along a trench towards the camera.

Watch the iconic rescue sequence from this silent 1916 film below, lasting up until 0:39:

The sequence is one of three that relate to the rescue:

The footage is believed to have been shot on 1 July 1916 by Lieutenant Geoffrey H Malins, one of two ‘War Office Official Kinematographers’ (the other was Lieutenant John B McDowell) who filmed The Battle of the Somme. What is less well known is that IWM has received almost 100 different names for the soldier carrying his dying comrade.

In his post-war memoirs, How I Filmed the War, Geoffrey Malins describes, with some flair, filming these sequences on 1 July 1916:

‘Still no definite news. The heavy firing continued. I noticed several of our wounded men lying in shell-holes in “No Man’s Land.” They were calling for assistance. Every time a Red Cross man attempted to get near them, a hidden German machine-gun fired. Several were killed whilst trying to bring in the wounded. The cries of one poor fellow attracted the attention of a trench-mortar man. He asked for a volunteer to go with him, and bring the poor fellow in.’

A man stepped forward, and together they climbed the parapet, and threaded their way through the barbed wire very slowly. Nearer and nearer they crept. We stood watching with bated breath. Would they reach him? Yes. At last!

‘Then hastily binding up the injured man’s wounds they picked him up between them, and with a run made for our parapet. The swine of a German blazed away at them with his machine-gun. But marvellous to relate neither of them were touched.’

‘I filmed the rescue from the start to the finish, until they passed me in the trench, a mass of perspiration. Upon the back of one was the unconscious man he had rescued, but twenty minutes after these two had gone through hell to rescue him, the poor fellow died. During the day those two men rescued twenty men in this fashion under heavy fire.’

As it currently stands, we feel the question of the soldier’s identity has not been definitively proven. However, by examining the film frame by frame we have been able to learn a great deal about the rescue and its context.

Read the full story of this iconic yet still-mysterious rescue – and learn how historians have identified at least some of the men in this historic footage – in the Winter 2016 edition of Inside History magazine.