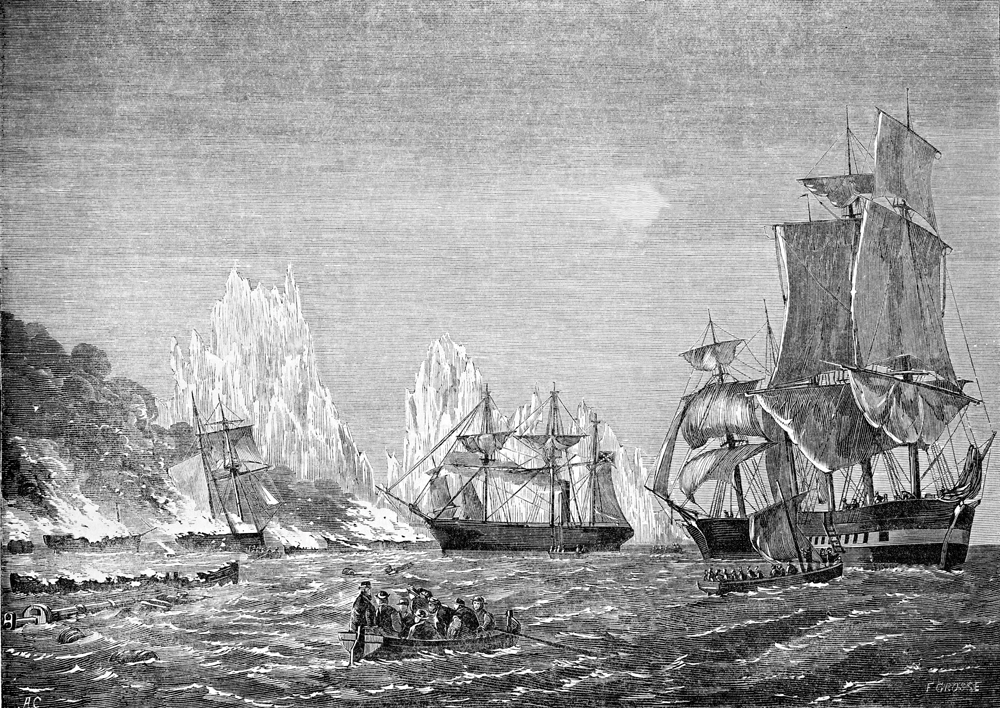 When the diary of an American lieutenant recently resurfaced in Tennessee, it revealed a little-known Australian link to the Civil War via the final journey of the CSS Shenandoah. In this excerpt from the Winter 2016 edition of Inside History, Dr Kevin Molloy from the Manuscripts Collection, State Library of Victoria, recounts this fateful voyage.

On 25 January 1865, an event unprecedented in the short history of Victoria unfolded when the American Confederate States ship Shenandoah arrived, unannounced, in Port Phillip harbour.

The CSS Shenandoah, a steam and sail cruiser, operated as a Confederate 8-gun raider and, since leaving its port of origin in Liverpool, England, had begun what was to be an eventful voyage circumnavigating the globe in the hunt for Union whaling ships. After crossing the Indian Ocean its destination was the North Pacific, where it was known the Union whaling fleet was concentrated.

In the events that subsequently unfolded the Shenandoah would be responsible for firing what was to be the last shot in the American Civil War. Further, it would be the centre of expensive post-Civil War litigation, known as the Alabama Claims, between the American and British governments for raids on the Union merchant fleet carried out by Confederate ships whose port of origin was the United Kingdom.

The story of the CSS Shenandoah has been well told in a number of books based on surviving diaries and journals kept by some of the key officers. Yet, history always has a way of turning up new documents when least expected and such was the case in 2015 when a previously unknown journal by one of the officers on the Shenandoah, Lieutenant Dabney Scales, was put up for auction in the United States.

Offered by Lieutenant Scales’ descendants, this unique and previously unknown journal had been kept within the family for generations and offered a fresh insight into the world of the Shenandoah, particularly the 24 days it spent in Melbourne and the subsequent voyage through the Pacific Ocean to the Artic circle, its rounding of Cape Horn and final surrender and lowering of the Confederate flag in Liverpool in 1865.

Purchased by an Australian antiquarian book dealer the journal, written on board the Shenandoah, has been offered to the State Library of Victoria. Until this August, the Library’s Foundation and Friends of the Library will be campaigning through the Library’s collection appeal to raise funds for the acquisition of the journal.

The arrival of a ‘belligerent visitor’

The arrival of the Shenandoah in January 1865 created a storm in Melbourne. As The Age reported on 26 January, when first sighted in the morning of Cape Otway the ship, ‘our belligerent visitor’ was presumed to be a British merchant vessel and it wasn’t until she entered Port Phillip heads and finally dropped anchor that it was known she was a war vessel. As the Argus reported the following day:

Remote as is our position from the Old World contentions… Melbourne yesterday was startled at the telegraphic announcement that a Confederate war steamer had entered the Heads, and report was confirmed by a large steamer, with something of a warlike aspect, casting anchor, a little before sundown, an easy distance from the Sandridge Pier. The stranger proved to be a war steamer — the Shenandoah — and though her demonstrations were of the quietest, the white ensign with the St George’s Cross and stars bespoke her position in the Confederate cause.

After months at sea, low on general supplies, coal and fresh food, and severely undermanned, the Shenandoah had been heading for Melbourne for several reasons; firstly for repairs and some very necessary rest for its overworked officers and crew; and secondly, to meet the next outward-going mail steamer to convey letters and alert the home government to the Shenandoah’s whereabouts after its lengthy period at sea and out of communication.

Who was Lt Dabney Scales?

Lieutenant Scales was a 24-year-old Confederate Naval officer when he arrived in Melbourne. A photograph taken at the time, in naval dress uniform, shows he cut a dashing figure.

Contemporary engravings published in the Age and Argus highlight the role the officers played in keeping open-ship for the thousands of tourists who visited on a daily basis. Special trains were laid on for these visits to the Sandridge Pier as well as numerous craft making their way directly to the Shenandoah, visitors being formally welcomed on board by a group of officers in uniform. On one day alone the Age noted that over 7,000 people made the trip to Sandridge, and this was only a portion of the crowd that gathered to view the ship.

The Shenandoah was the biggest tourist attraction Melbourne had seen in 1865, and the ship’s officers were wined and dined in style. For Scales and some fellow officers this included attending a formal dance at a private residence in St Kilda — he writes succinctly about the ladies he met; a ball in their honour at Ballarat; evenings out dining at the Café de Paris with friends, followed by billiards; and formal dinners, including that hosted by the Melbourne Club, much to the outrage of the editor of the Melbourne Leader on 4 February 1865.