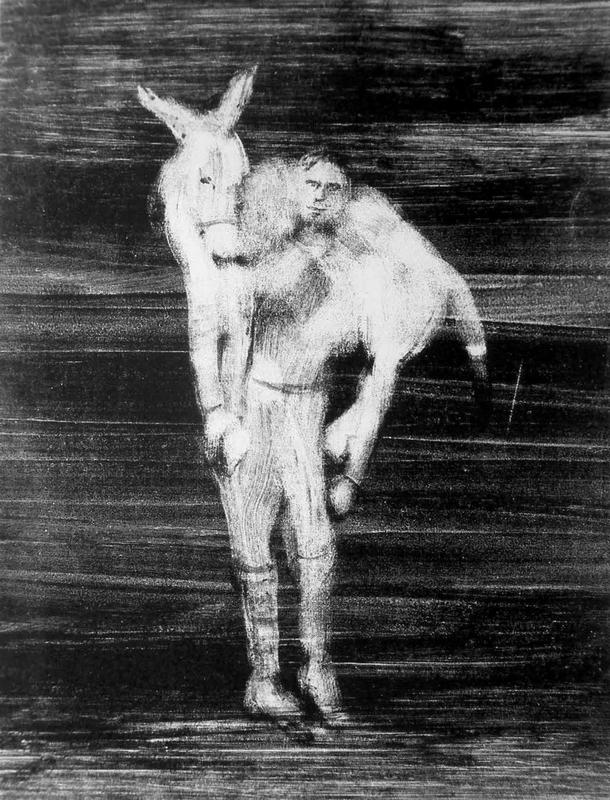 Home > Blog > Featured > The story behind the art: Sidney Nolan’s painting of Simpson + his donkey

The Australian War Memorial recently received a donation of a painting of Simpson and his donkey by none other than iconic artist Sidney Nolan. Here, Chris Wagner reveals the painting’s deeper connection to Gallipoli, a baroness volunteer nurse, and a decorated surgeon and photographer.

Quite literally, the story behind the recent donation of a Sidney Nolan painting, depicting Simpson and his donkey, has revealed deep and unexpected connections to the Gallipoli campaign.

Nolan completed the work as part of a large series of paintings and drawings on the subject of Gallipoli, most of which depicted soldiers and landscapes. Nolan spent 20 years creating a body of work about the campaign, and presented many of the works to the Australian War Memorial in 1978. Nolan donated this original set of works to honour the memory of his brother Raymond, a soldier who was accidentally drowned in Queensland during the Second World War.

The newly acquired donation features Simpson, carrying a donkey across his shoulders. This is reminiscent of early Christian paintings that show Christ carrying a sheep. The work was excluded from the original collection presented to the Memorial; inscriptions on the back of the painting’s frame may give an insight into the reason. One inscription says “Gallipoli painting, property of Maie Casey”; but in a different hand, the other says “Maie, with love from Sidney”.

Baroness Ethel Marian Sumner “Maie” Casey AC was an Australian pioneer aviator, poet, librettist, biographer, memoirist and artist. Born in Victoria, she was living in London at the outbreak of the First World War. Maie volunteered for work at Sir Douglas Shields’s Hospital for Wounded Officers as a Voluntary Aid Detachment (VAD) nurse, and then with Vera Deakin’s Australian Wounded and Missing Inquiry Bureau. After the war she married Richard Casey, who had served on Gallipoli as a staff officer and later became Governor-General of Australia.

However, her connection to the Australian story on Gallipoli goes deeper than that, to her father. He was Sir Charles Snodgrass Ryan, a man with a fascinating past. A surgeon from Melbourne, Ryan was known for having attended to Ned Kelly after the siege of Glenrowan in 1880. He had enlisted as a medical officer in the army of the Ottoman Empire and participated in the Russo-Turkish war in 1878. For this war service he was decorated with the Turkish orders of Osmanieh and Medjidjie, the campaign war medal, and the 1878 Plevna medal.

At the outbreak of the First World War, Ryan became assistant director of medical services, 1st Division, Australian Imperial Force. He sailed for Egypt in October and was appointed to Lieutenant-General Sir William Birdwood’s staff. In 1915 he was sent to Gallipoli where, in what could be described as a great irony of war, he faced an enemy whose country he had served nearly 40 years before. In June 1915, like many soldiers on the peninsula, he contracted enteric fever and was evacuated to Egypt and later to England.

It was during his time on Gallipoli that Sir Charles took a series of photographs that now make up a significant and important part of the Memorial’s First World War collection. His photographs were even the subject of a travelling Memorial exhibition, titled A camera on Gallipoli, the photographs of Charles Ryan. Some were taken with a stereoscopic camera.

The story of Sir Charles Ryan and his daughter, later Baroness Maie Casey, is an intriguing family connection with threads from the First World War to the current day, including this new acquisition.

The Nolan painting was purchased from the Bridget McDonnell gallery some years ago and has been held by the Favilla family until now. In October 2016, Mrs Margaret Favilla approached Memorial Director Dr Brendan Nelson at the Adelaide launch of the book Blood, Sweat and Fears II to discuss the donation.

The Memorial is delighted to acquire and display the work, and to discover this unique and fascinating link to the artist, the original owner, and our nation at war.

“The Memorial is honoured by the Favilla family’s generosity and we gratefully welcome this important work into our National Collection,” Dr Nelson said.

“The painting speaks to the Memorial’s mission, and is a particularly pertinent acquisition during the centenary of the First World War and Sidney Nolan’s birth. In addition, the fascinating connection between this painting, its original owners and the story of Australia’s service on Gallipoli, will add significantly to our collection.”

The work will be added to the Memorial’s First World War galleries.