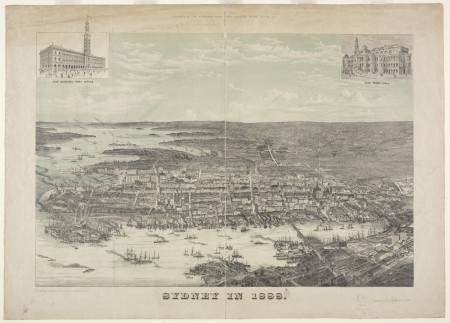 In January 1888 celebrations were held across the Australian
colonies to mark the centenary of European settlement. In Sydney, along with parades, fireworks, banquets and a host of special events, 50,000 people watched the governor, Lord
Carrington, unveil a statue in honour of Queen Victoria, and
Centennial Park was officially opened as ‘the people’s park’ before a crowd of over 175,000.
This detailed ‘birds eye’ view of Sydney was created to promote the city to a European audience in its special
centenary year. It was published as a supplement to the
Illustrated Sydney News in a Special European edition.