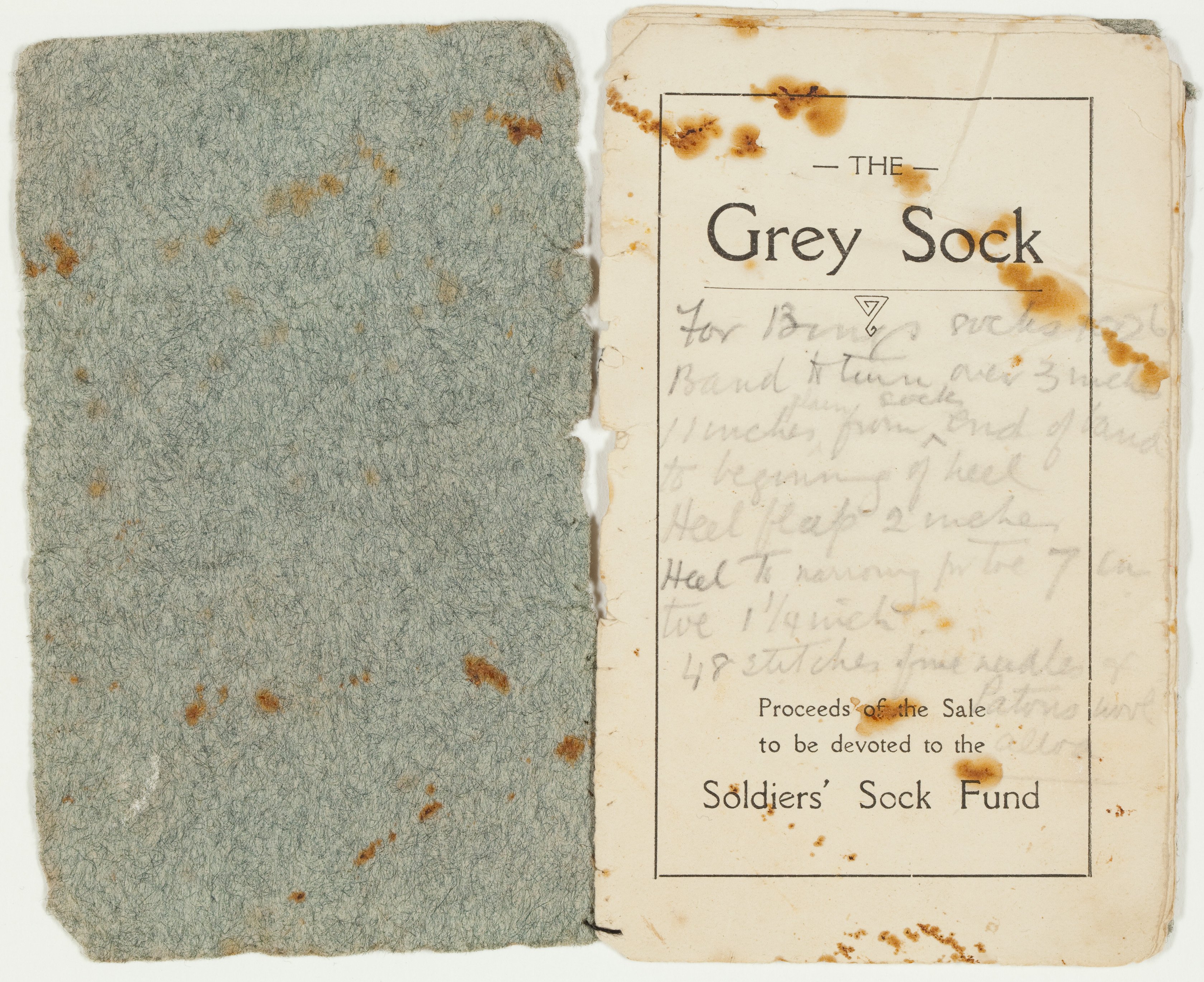 Home > Blog > Featured > Socks for the boys on the front :: an inspirational WW1 yarn

A box of historic B&W photographs from WWI has yielded a quirky piece of Australian war history with the discovery of a rare knitting pattern for the famous ‘Grey Sock’, a knitting kit and some camel hair.

A librarian uncovered the unusual items among the papers and photographs of Irene Victoria Read (1880 – 1972), a Sydney doctor’s wife who accompanied her husband, Henry William Read, to Egypt in 1915 where he worked at the Australian General Hospital in Cairo. The photographs include shots of hospital camps beside the pyramids and the first batch of wounded Aussie soldiers from Gallipoli in May 1915.

“The ‘Grey Sock’ is an inspiring symbol of how women on the homefront contributed to the war effort while also capturing the harsh realities of frontline trench warfare,” says Elise Edmonds, State Library of NSW Curator of Pictures and war specialist.

“The First World War activated knitting needles across the country as women and girls mobilised their skills to support soldiers overseas. Irene was involved with many charities including the Australian Sock Foundation who published her soldiers ‘Grey Sock’ knitting instruction booklet,” she says.

“Woolen socks were vital during the war and had to be hand knitted to exact standards so they were seamless and comfortable. Aussie soldiers in the cold and muddy trenches needed a continuous supply of clean, dry socks to protect them against the debilitating ‘trench foot’ and they were often sent in ‘comfort boxes’ with cigarettes, food and mail. “The Library’s extensive WW1 collection includes over 900 diaries, with many entries revealing how socks were an obsession for many boys, along with letters and their pay.”

Irene’s floral sock knitting kit holds a measuring tape, wool needle and grey thread, and one of the two ‘Grey Sock’ booklets discovered contains handwritten notes, presumably by Irene, that an expert knitter could follow. The camel hair appears to be a souvenir for one of the Read’s daughters as the envelope carries a handwritten inscription: ‘For Margaret, Camel’s hair just clipped. ’.

These wartime items were uncovered as Irene’s collection was being prepared for the Library’s online catalogue, during the Library’s eRecords project.

Extract from from the WW1 diaries from the State Library of NSW collection. Soldier Archibald Albert Barwick’s wrote the following in his diary: (22 August 1914 – 26 January 1919):

“Had a fairly liberal issue of rations this morning & we want them badly too we also had 14 pair of clean socks per platoon not enough but better than none at all I suppose. This morning Len & I received a fair batch of letters they cheer one up considerably when things are miserable…”