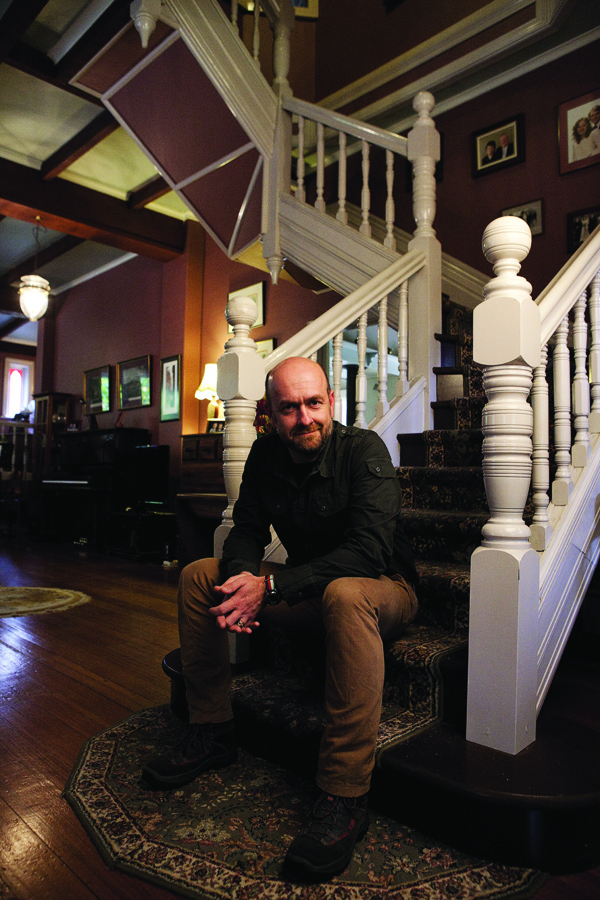 Home > Blog > Featured > Cup of Tea With…. Adam Ford :: Host of ABC TVs Who’s Been Sleeping in My House?

Archaeologist Adam Ford and his great team are back for another terrific series of Who’s Been Sleeping in my House? Drawing on 20 years of experience investigating significant international and local digs including Ned Kelly’s last stand, Ford chases down some amazing stories. Was there a fugitive British MP hiding out in a Victorian family attic? Was there a Nazi radio station broadcasting from Adelaide? What is the history of the grand ballroom? Inside History’s Paula Grunseit chats with Adam about series 2…

In Episode One, a huge shock is revealed live on camera and you discover something which challenges history so what happens next?

“We’ve been debating what to do about this. It’s a very serious finding and there’s a story of national interest there. It was one of those classic scenarios as you were filming and these things started to unravel and you’re all looking at each other. There are situations in every episode where something that is completely unanticipated or has not been linked, comes out.”

How do you find the houses?

“With the first series, no one had heard of the show so we found some houses from word of mouth or by talking to historical societies. When Series 1 was broadcast, we were inundated with over 400 invitations to look at properties. There are strict criteria: the house must be privately owned, have some good puzzles and stories, and provide access to historical records.”

Is there a different focus between series 1 and 2?

“It’s been partly organic and partly purposeful. Series 1 was a first so we were inventing it ‘on the wing’. For Series 2 we decided to focus on one major story and have a couple of subsidiary questions. In the end it’s about the people; it’s not about the house — it’s the story of the folk who lived within it and in the second series we try to bring that human connection into it more as well. I think the stories are stronger for that; they’re clearer for that. I’m happy with it. It was filmed in a short period of time and so it’s fresh. The stories are extraordinary, fantastic.”

What are the important research sources you used?

“The most important thing is local knowledge: local historical societies, museums and libraries. There are thousands of people — mostly retirees — who are the holders of Australia’s knowledge. They work phenomenally hard, for no monetary gain, and create an amazing amount of data. They are also well connected to other people and organisations. And then of course you go to titles records, probates, tax records, rates, births, deaths and marriages and so on to start building up the history of the people”.

So where did your passion for archaeology come from — I imagine you digging up the backyard as a child?

“You’re not far wrong actually. My eldest sister studied archaeology at university in Birmingham. My mother and father and I turned up on her first dig in Lichfield Cathedral grounds. I was seven years old, but remember it quite clearly. They were digging up the bodies of medieval monks. I was scrambling around on the spoil heap next to the dig and pulled out this bone that was sitting on the surface. I was standing there holding the finger bone of a medieval monk [that had been missed] and that was my first find ever. And from then on that was it; there was no other career.”

What qualities does an archaeologist need?

“It’s a broad career to go into. I’m a generalist. You need to be flexible, be open to all data that’s coming to you and think around a subject because we’re looking at the story of our past. You have to be able to piece things together, to and be prepared to be wrong, be able to engage with people, not be afraid to get stuck in, be prepared to travel and have enthusiasm.”

“My wife originally thought that archaeology was about as interesting as watching paint dry. And then she started to get involved with projects and realised it’s not about dry academia – it’s about people. My girls are nine and eleven and we’ve all just been on a big trip to Turkey and Europe. I was on a dig in Central Turkey, a 10,000 year old site in the middle of nowhere. The girls said that being on the dig in the middle of this dusty plain, in ridiculous heat was the highlight of their trip.”

Is there a ‘holy grail’ for you in terms of archaeological finds?

“Digging the Ned Kelly site, the siege at Ann Jones’ Hotel, finding the foundations of the inn, the bullets and the cartridges of the Kelly gang. The last people to have touched those cartridges were Ned Kelly and the boys. To be able to map the final moments of their freedom and their lives — with such a dedicated crew — was a definite highlight. As an archaeologist, you get to dig great sites but very rarely do you ever get to dig a legend. It’s a lesson in history; it shows how events can be interpreted in so many different ways.”