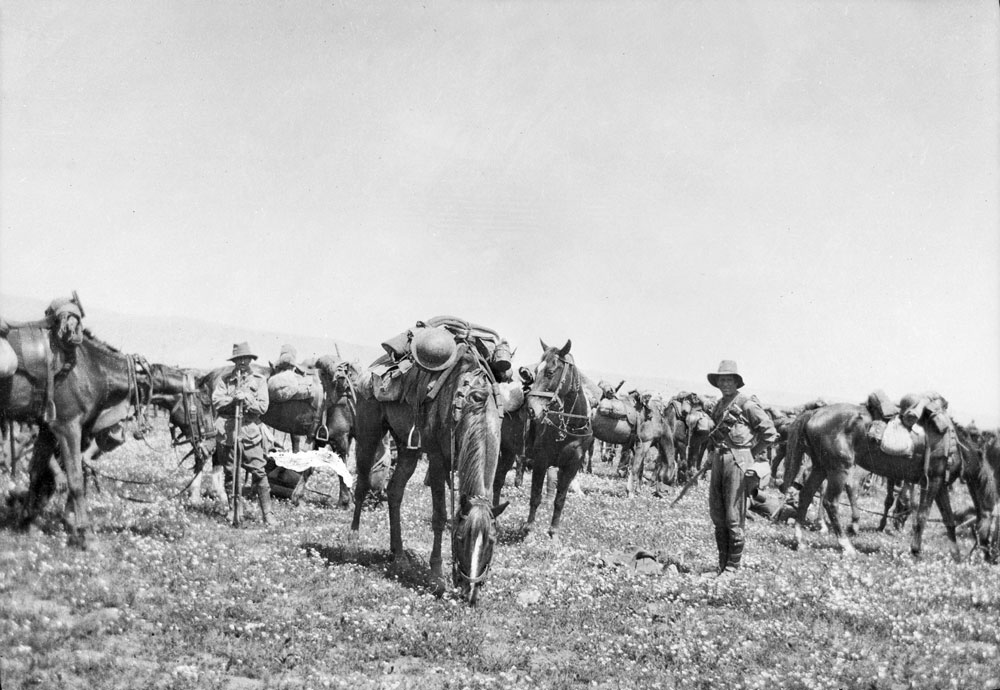 Piecing together war diaries and official records leads military historian Neil Smith AM to discover the heart-wrenching stories of the men and horses of the 4th Australian Light Horse regiment at the Battle of Beersheba. Neil C Smith AM is head of Mostly Unsung, which publishes on a range of Australian and British military history.

The shining silver medal with its crisp blue and crimson ribbon was comforting. The reverse simply read ‘For Distinguished Conduct in the Field’. Elsie Bolton had waited years for the original medal to be replaced. It symbolised so much that had happened in her life and that of her husband Sloan, now long past. On www.findmypast.com.au we see that Sloan Bolton had immigrated to Melbourne alone, as a teenager from Ireland in 1913. Further research reveals that he worked hard and became a locomotive driver. Then came World War I. Elsie had known Sloan before he joined up and disappeared to the sprawling Broadmeadows Army camp. It was another five years, however, before their romance could blossom, by which time Sloan was physically shattered from his active service at Gallipoli, then through the Palestine campaign to the mad, headlong mounted charge against Turkish guns at Beersheba and beyond. This article examines my efforts to identify and research confirmed ‘Chargers’ like Sloan. With the National Archives of Australia now providing digitised copies of all World War I personnel records, the task is becoming easier.

In summary, the Battle of Beersheba was a precursor to capturing Gaza. Two previous attacks on Gaza had not broken the Turkish defence line which barred the way north to Damascus. By mid 1917 British General “Bull” Allenby had concluded that only an offensive against Beersheba, at the extreme right of the Turkish defence line, could break the deadlock. The matter of who rode in the charge at Beersheba on 31 October 1917 continues to exercise the minds of many. The charge is embedded in the Australian ethos along with Gallipoli and the Kokoda Track. Simpson, the man with the donkey, allows us to put a human face to the Gallipoli campaign. Many yearn to do the same for those who rode at Beersheba. To effectively research those who charged, we must first examine the campaign. To do so requires some specialised research, including examination of the Regimental War Diaries held by the Australian War Memorial.

The War Diary tells us that on 28 October the 4th Light Horse Regiment, as part of the Desert Mounted Corps, moved out from Tel el Fara carrying three day’s rations and fodder. The column bivouacked for the night east of Esani. Sergeant Arthur Pickford was with A Squadron — which was destined to be the lead squadron in the charge. Notable chargers in his squadron were the four Langtip brothers of Chinese descent. Other men about to ride into history included Syd Vialls and Jim Ryan — both Boer War veterans. The next day, waiting in the heat of a wadi with parched lips were others like Reuben Lee, who along with Major Lawson served again in World War II. All these men and more have rich histories waiting to be explored among resources located as far afield as London, at NAA offices throughout Australia, the Department of Veterans’ Affairs and even among Department of Defence archives. Some, like Jim Schultz and Bert Salvado, used an alias, but lateral thinking and use of resources like later war gratuity registers will often come up trumps. Pickford described the lead-up to the charge:

28th October. Issued with three days rations for self and horse. Left Tel el Fara in the evening. My health good.
29th October. Camped at Berl el Sam for the night and day. Moved off in the evening. Camped at Khalasi in an old ruined village. Bonzer well for watering horses.
30th October. Off again in the evening. We are ordered to hang on to what water and food we have. The next we get we are to capture from the Turks. We travelled all night doing 30 miles.

The offensive on Beersheba started on 31 October 1917. British troops attacked the southern and western defences without success. The Desert Mounted Corps was ordered to capture a fortification named Tel el Saba to the north east of Beersheba. All assaults failed and the battle raged through the day. The mounted troops had now been without water for nearly two days and by late afternoon it was apparent that Beersheba had to be taken that day, or the Corps would suffer a major reversal. Accordingly, the reserve Australian Light Horse Brigade was directed to make a frontal attack on Beersheba. There was no time to plan and there was no support available. The Brigade comprised the 4th and 12th Regiments leading the charge, plus the 11th in reserve. Murray Bourchier commanded the 4th Light Horse Regiment. A Gallipoli veteran with militia service, Bourchier was annoyed that his regiment had missed out on previous battles and eagerly grasped the opportunity for action. Bourchier’s part-time militia service before the war can be tracked on microfilm at the NAA and Army Officer Lists summarise his main appointments and those of his officers.

Bourchier ordered Major James “Vicar” Lawson to lead the Charge with his A Squadron. At a walk, then canter, they advanced, most wielding hand-held bayonets with the heat and the flies forgotten. Surprise and speed were their best weapons, and almost at once the pace was quickened to a gallop, wrote the official historian, Charles Bean. Troopers Alfred Healey and Tom O’Leary raced ahead as ground scouts identifying enemy positions while the long lines of Light Horsemen thundered behind. The startled Turkish gunners opened up with artillery fire but could not depress their guns rapidly enough to keep up with the pace of the charge. Even so there were early casualties. Shrapnel sliced through Colin McLean’s left elbow and he gradually slipped from his horse. The following horsemen swerved or jumped their horses over him. The embarkation rolls at the Australian War Memorial reveal that McLean had embarked with reinforcements for the 4th Light Horse Regiment on the troopship Clan MacCorquodale on 6 May 1916. Other chargers identified in this research project, such as Tom Noonan from Traralgon and Bert Sidlow from Brunswick, had sailed with McLean.

As the pounding hooves narrowed the gap to the enemy lines, the Turks commencing firing with machine guns and rifles. Within minutes the Australians reached the trenches, at which point much hand-to-hand fighting took place while many troopers simply jumped the defences and galloped into the town. Panic took hold among the enemy and their resistance quickly crumbled. Many tried to run and were overcome by those who leapt from their horses and attacked the Turks with bayonets and revolvers. Bolton’s horse Monty had been struck by a bullet on the rump and, maddened with pain and fear, took off. With adrenalin pumping the Light Horsemen fanned out through the town capturing guns and prisoners. Bolton saw Albert Cotter treacherously killed after he had chased and bailed up a field gunner. The Turkish drivers had quickly surrendered, but when Cotter trotted up, one shot him dead. The Roll of Honour Circular held by the Australian War Memorial for Cotter notes that the Sydney Grammar School graduate had previously gained prominence as an international cricketer.

In an effort to thwart the Australian efforts to secure water and capture Beersheba, demolition of the town wells had already begun. Fortunately, this was stopped when Bolton and Ray Hudson from Corowa came across an officer feverishly working an array of demolition switches. The officer promptly raised his hands when threatened by the revolvers of the Light Horsemen. Turkish prisoners were herded into a concentration area and the injured gathered. Edward Cleaver was among the seriously wounded and died at the Field Ambulance three days later. With chests heaving, dismounted men and horses drank thirstily. Other Australians were still racing beyond the town in the gathering darkness. Bolton was a quarter of a mile away when he heard wheels rattling ahead. He spurred Monty forward and soon came upon a horse-drawn Turkish wagon. Bolton closed in and saw a German officer riding on the front seat next to the driver:

Riding up to him I gave a fierce yell. My revolver misfired, so I struck him over the head with it. However he was wearing a steel helmet and I hurt my hand more than I hurt him. The next blow was more successful.

For this action Bolton received the Distinguished Conduct Medal, details of which are to be found on the AWM and the London Gazette websites. Using Trove we find reference to such acts of gallantry plus Cleaver listed with other fatalities from the charge in the Gippsland Times.
Pickford described the battle:

31st October. The charge started at 5 o’clock. I was in the second line. The Turks opened with heavy rifle and artillery fire. It was hell itself gone mad. A few of our men and horses were falling but lucky for us the Turks were firing high. We took the Turkish trenches in our stride. Nine feet deep. We won the position by a big bluff. Beersheba was ours.

The charge was a radical tactical move. Defying the odds, the 4th and 12th Regiments had charged across open ground against entrenched Turkish troops — and won. For his courage and leadership Major Lawson was recommended for the Victoria Cross. Sadly the award was downgraded and the officer instead received a Distinguished Service Order. Several pages of the associated recommendations for Lawson and other chargers like Boer War veteran Arthur Cox can also be seen on the AWM website.