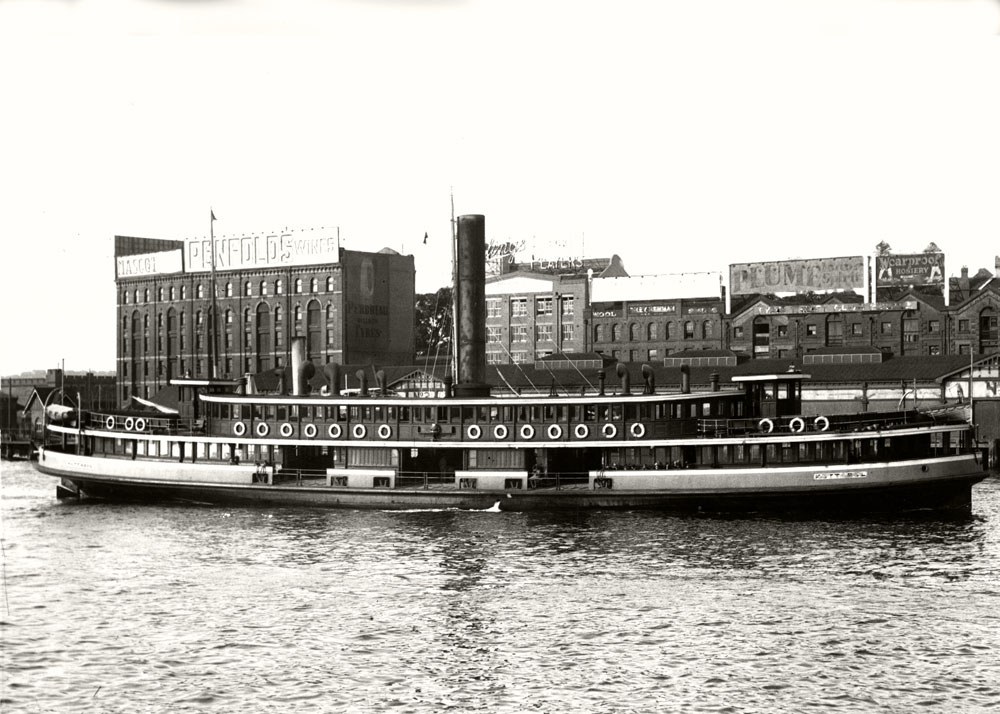 The night of 31 May 1942 was the closest the east coast of Australia came to war, when Japanese midget submarines entered Sydney Harbour. HMAS Kuttabul bore the brunt of the attack. Respected military historian, Steven Carruthers*, reports.

The attack on Sydney Harbour in mid-1942 by three midget submarines was the opening salvo in a Japanese submarine campaign off the east coast of Australia that sunk 21 ships, attacked a further 19 vessels, and claimed the lives of 670 men and women. In Australian naval history it is a little known event, yet more lives were lost along this stretch of coastline than on the Kokoda Track (624 including those missing in action) and the sinking of HMAS Sydney (645).

The first casualty in the sea war was HMAS Kuttabul, a converted harbour ferry being used to accommodate sailors, many waiting for their next posting. On the night of 31 May 1942, three midget submarines avoided the incomplete anti-submarine boom net at the entrance to Sydney Harbour and attempted to sink Allied warships. After being detected and attacked, the crews of two of the midget submarines scuttled their boats and committed suicide without successfully firing their torpedoes. The third attempted to torpedo the heavy cruiser USS Chicago but instead sank HMAS Kuttabul. Twenty-one sailors were killed and 10 were seriously injured. Escaping from the harbour, the fate of this submarine remained a mystery for 64 years, until a group of deep water divers discovered the wreck off Sydney’s northern beaches on 12 November 2006.

Built at the Walsh Island shipyard in Newcastle in 1922, Kuttabul was the pride of Sydney Ferries Ltd. Many ferries in the fleet were given Aboriginal names beginning with “K” and Kuttabul meant “wonderful”. Designed to the highest specifications of the day, the steel-hulled vessel had longitudinal and athwartships water-tight bulkheads and was regarded as practically unsinkable. Certified to carry 2089 passengers, it and her identical sister ferry Koompartoo were the largest passenger carrying vessels on Sydney Harbour, transporting passengers to and from Circular Quay and Milsons Point.

Kuttabul ceased running as a ferry in 1932 when the Sydney Harbour Bridge opened. Along with 17 other ferries she was laid up and then put up for sale. The vessel languished until 1935 when her hull was painted white and she became the first concert boat for Sydney Ferries. She was renowned for her moonlight harbour cruise on Sunday evenings, which included community singing and music played through 101 AWA speakers.

With war looming in the Pacific, the old ferry was leased by the Royal Australian Navy on 7 November 1940 for use as a depot ship and commissioned on 26 February 1941. With her bulwark and hull painted grey to reflect her new status, the converted concert boat had messing arrangements for up to 250 sailors and slept 150 men. On the night of the surprise Japanese raid she was berthed on the south-eastern side of Garden Island and most men were ashore on weekend leave. It’s estimated that 35 to 40 men were on board when the torpedo struck the sea wall alongside the old ferry and exploded. When the huge column of water and airborne debris settled the Kuttabul sank fast, her back broken. Pointing down harbour, the stern sank almost immediately with the forward section settling about half an hour later. Only the roof decking, a wheel house and funnel remained above the water. Splintered wood and other debris floated on the oily water. This moment in history is captured in an illustration by Howard Baron, one of Australia’s foremost wartime illustrators.

It would be more than 12 hours before it was known how many men had been aboard the vessel when it sank, and more than 40 hours before the death toll was known. The confusion was compounded by sailors swapping watches, some visitors being onboard, some sleeping elsewhere ashore or nearby, and at least one AWOL.

Australian history is full of tragic stories, but the death of Stoker Kenneth Killeen, 20, is enough to break your heart.

Among those killed were two sailors from the Royal Navy. Ordinary-Seaman David Trist had survived the sinking of the British battleship HMS Repulse, which had gone down off the Malayan coast, only to die six months later in Kuttabul. Able-Seaman Frank Kirby had escaped injury from the bombing of the heavy cruiser HMS Cornwall, sunk in the Indian Ocean, but met his death in Sydney Harbour. Both were returning to the UK for survivors’ leave. It was these two men who were to cause some confusion in the number of sailors killed for many years as they were not listed along with the RAN dead. The misunderstanding was cleared in 1988 when a memorial was unveiled on Garden Island with the full list of 21 sailors.

Most of those killed were “stokers”, engine room ratings who were billeted nearest to the point of explosion. Only two sailors from the stokers mess survived the blast. One of them was Ray Major, 21, from Brisbane. Ray found himself on the deck with water lapping his face before deciding to “get the hell out of there.” On his way over the side of the ship to safety he rescued a trapped and bloodied sailor.

Petty Officer Leonard Howroyd of Penrith, Sydney had swapped duty so he could meet his wife the next day, but lost his life that night. Stoker Norman Robson, 19, had joined the Navy seven months earlier and had only recently joined Kuttabul to await a warship posting. He was due to go home on leave the following morning. He died instantly as the explosion ripped through the ship.

Stoker Howard Whittaker was rostered to be onboard that evening but asked another Melbourne boy, Stoker Jack Gardner, who had just come onboard from seeing his new baby daughter, to stand in for him at the 0900 hour roll call, allowing him to go ashore. On his return next morning Howard found Kuttabul submerged and, tragically, his mate’s body was the last to be brought to the surface.

Australian history is full of tragic stories, but the death of Stoker Kenneth Killeen, 20, is enough to break your heart. His mother Vera was heavily pregnant when she received news of her son’s death, which sent her into a deep state of shock, and early labour. The complications of a premature birth brought about the death of both mother and infant.

Able-Seaman Colin Whitfield of the Royal New Zealand Navy (RNZN) was going on watch when he was thrown to the deck by the blast. Unable to move his legs he was helped ashore by another rating. Six other sailors from the RNZN had elected to sleep ashore, thereby saving their lives. Petty Officer Littleby, who should have been sleeping aboard, was asleep on a nearby launch. He manoeuvred the launch alongside the wreck and rescued several of his shipmates.

There were other lucky escapes. Relieved from sentry duty, Ordinary-Seaman Neil Roberts took up an offer to sleep in a mate’s hammock on the upper deck rather than his own hammock below decks. When the explosion came he found himself in water and caught in a stairwell. Swimming underwater he eventually found an exit and made his way to the surface and climbed the sea wall. He said later that the decision to sleep on the upper deck saved his life.

Ordinary-Seaman Charlie Brown remembers a colossal orange flash before being thrown, head first, between a row of wash basins and through the ship’s side. Suffering extensive head injuries, he was heavily bruised from his head to below the waist. Ordinary-Seaman Bill Williams had watched the commotion on the harbour earlier in the night and then went to sleep only to wake in the water. He swam to a small boat nearby and managed to pull in another survivor. Able-Seaman Frank Rudd, 25, said that the torpedo hit the sea wall astern of the depot ship, “exploding and ripping the bottom out of the ship.” With the blast he was thrown overboard and scrambled ashore as best he could.

Able-Seaman Horace Beazley and Ordinary-Seaman Harold Reader escaped death twice that night. Both had left the Kuttabul before midnight to commence their sentry watch at Gun Wharf and the adjacent pier on Garden Island. Half an hour into their watch the first torpedo struck, killing many of their shipmates. The second escape came when another torpedo ran aground between the wharf and pier, only a few metres from both men, but failed to explode. Mr Reader, now 91, is the last known surviving seaman attached to the Kuttabul.

Nearby a group of men stripped off their clothes and dived into the shattered vessel looking for survivors. Two of these men were Captain A.B. Doyle and Commander C.C. Clark. Bandsman M.N. Cummings, who was on board Kuttabul at the time of the explosion, dived into the water repeatedly to save his shipmates. Captain Doyle said later that they were hampered in their efforts to save men, being told by jittery personnel on the wharf to turn off their torches every time they tried to examine a survivor — they were fearful the enemy would see the lights.

When daylight arrived the dive boat, which had been moored near the Kuttabul against the sea wall, was nowhere to be seen. Leading Seaman Diver Lance Bullard wrote in his report that a motor launch was requisitioned and naval stores supplied replacements for the heavy gear left in the diving boat. Joined by divers from the light cruiser HMAS Adelaide, they were in the water by 0915 hours.

Many of those killed were still in their hammocks, pressed up against the shattered deck-head. The divers cut the hammock lashings and the bodies emerged from their cocoons, floating to the surface in boiler suits and pyjamas. Once pushed ashore they were laid out on the wharf by their shipmates for identification. Those who died on Kuttabul were victims of a war that had suddenly overtaken them before they had a chance to meet it.