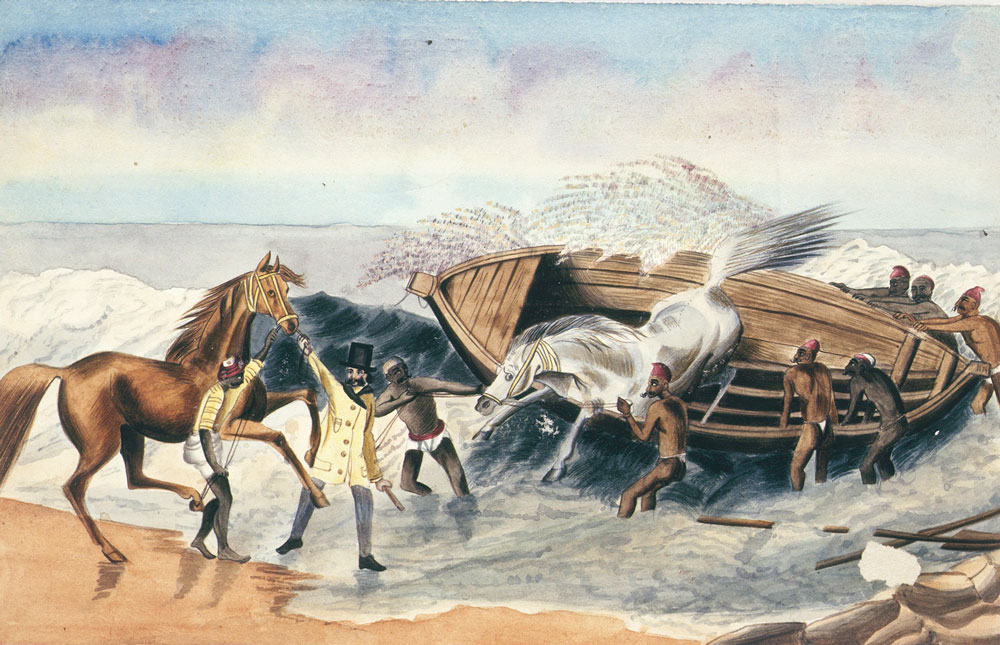 East of India – Forgotten trade with Australia is a superb new exhibition at the Australian National Maritime Museum that traces our colonial links with India, the power and monopoly of the English East India Company, and its eventual decline. Full of history, surprises and treasures, it engages visitors with tales of ships and shipwrecks, rice and rum, officers and officials, sailors, soldiers and servants. Paula Grunseit spoke with members of the curatorial team.

India is Australia’s eighth largest trading partner and is our third largest source of immigration. But many people may not realise that Australia’s early colonial trade with India was closely linked to the rise and fall of the powerful English East India Company (EIC), whose monopoly spanned centuries.

East of India — Forgotten Trade with Australia is a large, interactive exhibition telling an extraordinary story of power and politics, and features more than 300 rarely seen objects sourced from Australian and international collections, including the Victoria & Albert Museum, the British Museum, and the Royal Collection. It’s the collaborative effort of around 20 staff and one of the challenges that faced the team, says curator, Dr Nigel Erskine, is that “it’s a complex history to tell in a museum.”

Explaining his concept for the exhibition, Dr Erskine says: “I’ve always been interested in the act of settlement. My PhD focused on the settlement on Pitcairn Island of mutineers from the Bounty and I was intrigued by the notion that a group of sailors could arrive at an island they had never seen before and start a settlement. The same interest was sparked by the idea that politicians in England could make a decision to start a settlement in New South Wales based on very little real information about the country and expect it to survive and grow. As I read about the first years of European settlement in Australia, I found myself reading more about India and the power of the East India Company – and that’s when the concept for an exhibition surfaced.”

When many of us think of the East India Company, we may link it with the spice trade of the Dutch East India Company and while it is true that the Spanish, French, Dutch, Danish and the Portuguese had their own interests, it was Queen Elizabeth I who founded the EIC in 1600 by granting a royal charter allowing a monopoly for all English trade east of the Cape of Good Hope all the way to the Strait of Magellan. Says Erskine:

“Perhaps unsurprisingly given the East India Company’s right to raise its own armies, mint its own coinage and collect taxes, many people are confused as to whether it was a trading company or a sovereign power,” says Dr Erskine. “Its powers were certainly extraordinary and the company’s interests evolved over two centuries. The paradoxes inherent in the company’s operations were the cause of fierce debate while it was in power, so it is no wonder that many people in our own time are confused.”

The exhibition begins by describing the opening up of a seaway to India by Vasco de Gama and the Portuguese in 1498 and gradually moves on to portray the power of the EIC and its acquisition of territory. On loan from the Victoria & Albert Museum are a porcelain vase with royal crest and coat of arms granted by Queen Elizabeth I and a locket commemorating the 1662 wedding of Charles II and Catherine of Braganza, Princess of Portugal. Her dowry included Portuguese Bombay (now Mumbai) which was later leased to the East India Company.
The curators were also keen to tell the story “as much as we could from the Indian point of view,” says Dr Erskine.

“To understand the story of colonial Australia’s engagement with India we have to step back and understand what was happening in India at the time. The interpretation of events and the way they are remembered depends on perspective.”

One man’s rebellion is another’s war of independence and this became particularly evident during the Indian resistance to British dominance by key figures such as the rulers of the Kingdom of Mysore — Haidar Ali and Tipu Sultan who adopted the tiger as his symbol of power and was known as “The Tiger of Mysore”. Advanced in both weaponry and strategy, and still regarded as a hero of India, Tipu Sultan fought the British through three wars but was killed in the fourth, the battle of Seringapatam in 1799.

On the flipside, it is not difficult to imagine the confusion experienced by Europeans in India when they tried to navigate the complexities of religion, caste and other unfamiliar aspects of Indian society; the exhibition also addresses this culture clash.

By the 1840s many pastoralists were shipping horses to Calcutta, and Australia supplied horses to the Indian military from around 1834 until the end of WWII. Our horses were considered healthy and sturdy and as they were bred in New South Wales, were known as ‘walers’. Transporting horses by sea was costly and fraught with difficulties and sadly, many drowned or died at sea.

The exhibition also features some of the forgotten stories of early settlers in the colony through documents and objects. Some of those who came here at that time were convicts sent to Australia from India where they were serving with the British Army. One of those was Private James Dwyer, who was transported for punching his superior officer. Michelle also wanted to bring to light the story of the unsuccessful attempts to initiate Indian and Eurasian indentured labour schemes (servants, sailors and agricultural workers). It became apparent that these workers suffered mistreatment and abuse.

In favour of the continued use of convict labour, colonial authorities weren’t keen on the idea of employing Indian workers and although some did, most Anglo-Indian settlers who came to Australia were discouraged from bringing Indian domestic staff with them. “I came across the case of William Browne, a merchant and landowner who had settled in Sydney after living in Calcutta,” says Michelle. “He brought a group of Indian servants to work for him in Sydney in 1816, some of whom alleged they had been mistreated and complained to authorities. Governor Macquarie ordered an investigation and a special inquiry was set up. The Indian workers gave statements to a Special Bench of Magistrates in 1819. Following the inquiry, thirty-five servants were sent back to India on Mr Browne’s ship, Mary.” Michelle was excited to locate the testimony of the Indian workers (about 30 pages) in a 900-page document from an inquiry held in Britain in 1826 into the East India Company and the slave trade. Actors bring these stories to life for exhibition visitors through audio.

Eurasian workers did not fare well in the colony either and the East Indian Immigration Society of Madras, Chennai was formed in 1852 to assist people of mixed European and Asian parentage to work in New South Wales. A passenger list on display records the names, ages and occupations of Eurasian workers who arrived in 1854; 10 of them were under 14 years of age.

Sea journeys were fraught with dangers so there were ongoing attempts to find safer routes. There is a long list of shipwreck casualties (there are an estimated 8,000 shipwrecks around the coast of Australia), the Sydney Cove being one of them. It set sail for Sydney from Calcutta in 1796 with 15 Europeans and 44 lascars (Indian seamen) aboard. Beached on Preservation Island in Bass Strait, its cargo included 31,500 litres of alcohol, tea, textiles, men’s shoes and porcelain. Many objects from the wreck are on display in East of India. Another ill-fated voyage was that of the Guardian, the first ship scheduled to arrive at Port Jackson after the First Fleet. Having struck an iceberg off the Cape of Good Hope in 1789, most of the supplies and those aboard were lost. The logbook lying open at the day the ship hit the iceberg is on display in the exhibition and it’s chilling to see the difference between the orderly entries of the preceding day compared with the chaotic ink blotches of the fateful day.

Several fascinating items on display (including a gudgeon believed to be from the wreck of Matthew Flinders’ merchant vessel, the Cato), are a result of dives that were undertaken to look for ships lost at sea during this time of flourishing trade between India and Australia. Made possible via an ARC grant with the University of Sydney and in partnership with the Silentworld Foundation, Curator Dr Erskine and a team have been diving over the past four years in the Coral Sea and on the Great Barrier Reef. You can read about this project on the museum’s Maritime archaeology blog – click here to read more.

East of India – Forgotten Trade with Australia runs until 18 August 2013 at the Australian National Maritime Museum. Visit www.anmm.gov.au/india for details.