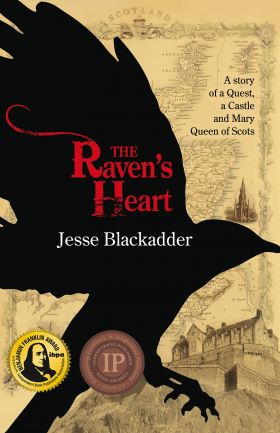 Jesse Blackadder is the author of award-winning historical novels The Raven’s Heart (about the real Blackadder family and set during the reign of Mary Queen of Scots) and Chasing the Light (the story of Norwegian-born Ingrid Christensen, the first woman to reach Antarctica). Now writing a series of children’s novels, she spoke to Paula Grunseit at the Byron Bay Writers’ Festival about her childhood dream of being a vet, family history and writing for children.

When Jesse Blackadder was awarded an Australian Antarctic Arts Fellowship to work on her novel Chasing the Light, she didn’t know that she’d come back with the beginning of an idea for a series of children’s novels. Blackadder travelled to Antarctica aboard the Australian Antarctic Division ship Aurora Australis on a six week round trip voyage in late 2011 and it was during this time that she got the idea for Stay: The Last Dog in Antarctica, the first book in a series of three novels about animals, aimed at 8-12 year olds. All the books in the series are inspired by, and based on, real stories of people and animals, and researched in the field.

“On my first field trip in Antarctica, we had this collection dog (called Stay) which somebody had dognapped and put in the back of the truck,” Blackadder says. “I thought, ‘That’s a bit odd’, and over the course of the time, I heard the stories of this dog and realised that she is a complete Antarctic celebrity and that I was in the presence of greatness! She was just a wonderful character and I guess in my mind, apart from all the seriousness of the research I was doing for the other project, I thought ‘here’s this quirky thing that really personifies the whacky side of Antarctic life, the larrikin humour’. This dog got kidnapped from Hobart twenty-two years ago and goes on some new adventures every year. She even has a passport and a Facebook page!

“I thought this would be such a lovely way to tell kids about Antarctic life through a young type of character because they’re fascinated by it, study it at school and can’t get there any other way. I think my inner eight year old must be pretty active because I felt I just clicked into the right voice quite quickly and came really naturally to start writing to that age group,” she says.

Growing up, Blackadder wanted to be a vet, and animals and country life were a big part of her childhood. She explains: “I grew up in Sydney but always wanted to get out of Sydney and live in the country. Those were the days when people had cousins on farms and we had cousins in Armidale so every chance I had I went to our cousins’ farm and I was horse mad. And it’s like a full circle as the writing took me back to an age when I was discovering my love of reading and secondly my love of animals and wanting to be a vet so it is like really coming back to some core part of who I am.”

It’s no surprise then that the second book in the series is about horses. Paraku: The Desert Brumby is about a large group of wild horses living in the Kimberley. “They are very beautiful, wild horses with strong, Arabian bloodlines, and one of the Sheikhs of Dubai heard about them and sent an Australian out to catch some to bring back to train in his endurance racing stable,” Blackadder says.

The story features thirteen-year-old Rachel who goes out to the desert with her father to catch the brumbies. “I actually wanted to play around with the complexity of capturing wild animals and what that meant for those animals but also, they are feral animals so they’re destructive so I wanted to explore complex human and animal relationships,” she says.

Ringo: the Lost Flying Fox is based on the recent history of a flying fox colony that was located next to Maclean High School in the Northern Rivers region of NSW. This caused problems and many attempts were made to shift the colony. “I seem to be attracted to stories where there’s not a simple answer, where there are different points of view. At eight to twelve [years of age], you are getting big enough to understand that life is kind of complicated,” she says.

So how does history add to the mix?

“Interestingly, I don’t remember having a strong connection to history,” Blackadder says. “I didn’t do history as a high school elective; I was going to be a vet so I was studying science and maths. You wouldn’t have thought I was going to be a writer either at that time in terms of my subject choices. My interest in history grew organically from finding out where I came from.”

That interest was sparked when Blackadder began researching her novel The Raven’s Heart. “That book will always be close to my heart because of the family history connection,” she says. “I haven’t been able to trace my exact family history back but here are people I’m connected to through bloodlines, who had a strong connection to a place and lost that place. That’s what absolutely fascinated me about that story and what kept me in it for the many years I researched it.”

“I think for people who are using their family history as inspiration, it drives you in a way that a more distant story perhaps doesn’t because you do have this feeling that this story has come through me, it belongs to me and I’m now telling it. It’s a great feeling; it’s very inspiring. I often hear people talking about their family stories and they get a real ‘fire in the belly’ about them and family stories aren’t always suitable for general audiences but sometimes they are and even if they’re not, to write it for your family is a great thing too.”

On writing historical fiction, she says: “I came into that project [The Raven’s Heart] as a novelist so everything had to serve the story. It wasn’t a family history — it was a novel. So, you engage with the research, you hold it inside you and then at some point, especially as a novelist, you do let it subside because the story does have to be primary. Most bad historical fiction is where people try to put in every single thing they have discovered.”

Favourite history-related read? Burial Rites by Hannah Kent. “It’s a beautiful story, beautiful writing and Hannah is such a lovely woman herself and having seen her on Australian Story as many people would have, she’s a humble, unassuming person with it seems, enormous integrity, and that shines through her story. When I saw her on that program, it was as if I was hearing my own journey being told — how you become obsessed with one character and you feel this strange, inexplicable drive to rescue them and tell their story and I felt a lot of kinship with her and felt very grateful to be on a panel at the Byron Bay Writers’ Festival with her.”