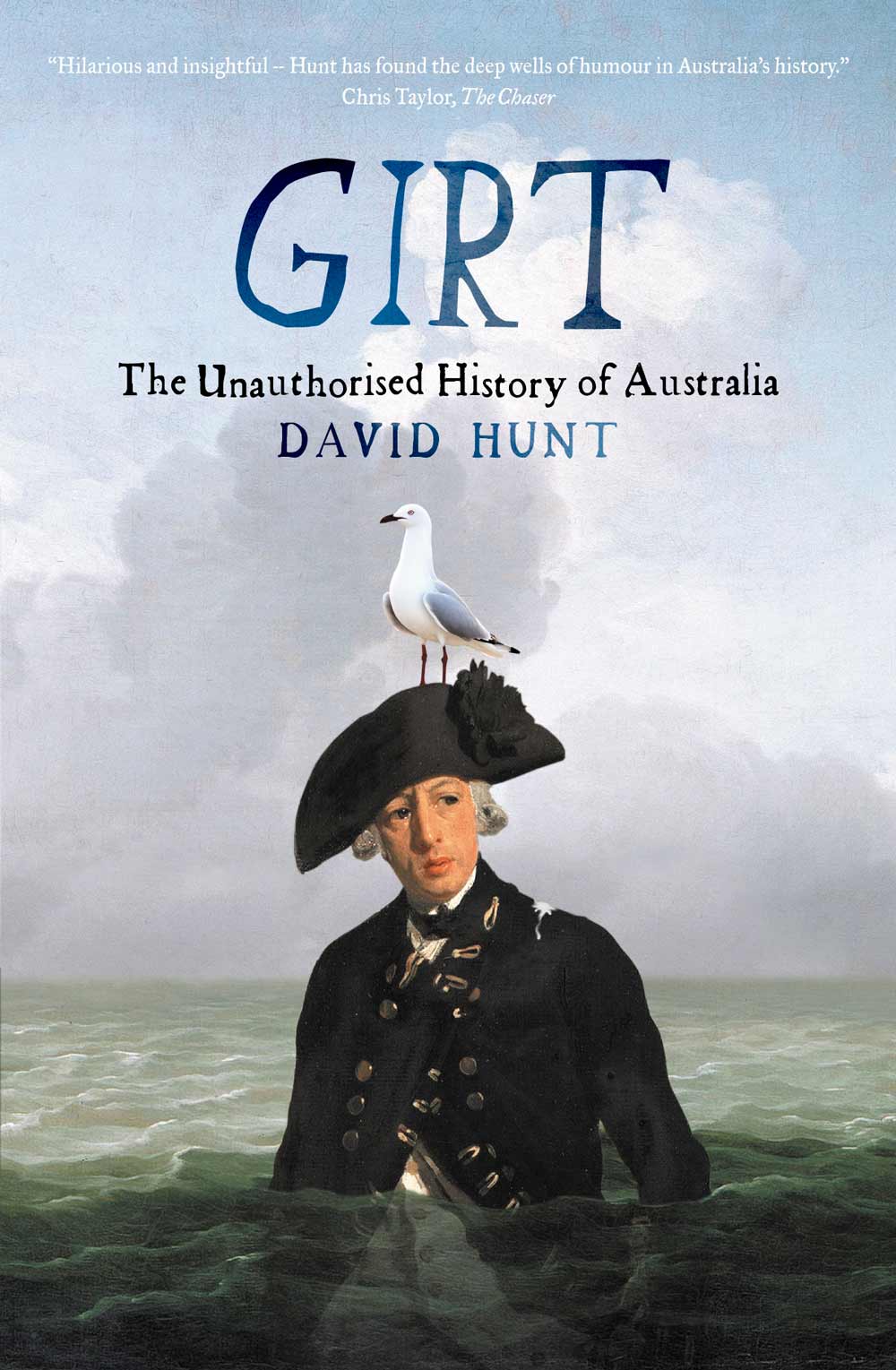 In Girt: The Unauthorised History of Australia, David Hunt reveals the truth of Australia’s past, from megafauna to Macquarie – the cock-ups and curiosities, the forgotten eccentrics and Eureka moments that have made us who we are. Girt introduces forgotten heroes like Mary McLoghlin, transported for the crime of “felony of sock”, and Trim the cat, who beat a French monkey to become the first animal to circumnavigate Australia. It recounts the misfortunes of the escaped Irish convicts who set out to walk from Sydney to China, guided only by a hand-drawn paper compass, and explains the role of the coconut in Australia’s only military coup.

Our nation’s beginnings are steeped in the strange, the ridiculous and the frankly bizarre. Girt proudly reclaims these stories for all of us. Mark Twain wrote of Australian history:

‘It does not read like history, but like the most beautiful lies … but they are all true, they all happened.’

In Girt, Hunt uncovers these beautiful lies, recounting the strange and ridiculous episodes that conventional histories ignore. The result is surprising, enlightening – and side-splittingly funny.

Here are some little-known (and hilarious!) facts from Australian history:

Near enough’s good enough: The Captain Cook Monument at Botany Bay honours Cook for first setting foot on Australian soil on 28 April 1770, although he didn’t arrive until the following afternoon. There can be no finer tribute to Australia’s “she’ll be right” attitude than this error having remained uncorrected for over 140 years.

Misdirection: In 1606, Willem Janszoon of the Dutch East India Company landed the Duyfken near present-day Weipa on the Cape York Peninsula. He named the new land Nova Guinea and distinguished it from New Guinea, which he called Os Papua. To further complicate things, he named part of Os Papua Nieu Zelandt. Janszoon soon sailed home in a state of geographical confusion.

A waste of perfectly good kitchenware: Another Dutchman, Dirk Hartog, visited Western Australia in 1616. He spent three days finding nothing of interest, nailed a pewter plate to a post and buggered off back to Batavia (Jakarta). His countryman Willem de Vlamingh visited eighty-one years later and took the Hartog Plate, replacing it with another plate (confusingly also known as the Hartog Plate). In 1801, Frenchman Jacques Félix Emmanuel Hamelin came to see the famous plate and was so moved that he left his own plate behind. Louis de Freycinet, a less culturally sensitive French tourist, stole the second Hartog Plate in 1818. You can see the first Hartog Plate in Amsterdam’s Rijksmuseum and the second in the Western Australian Maritime Museum if you have nothing better to do than look at old plates.

Rich claim: The first Englishman to visit Australian waters was Captain John Brookes, who crashed his ship, the Tryall, into some rocks off the Western Australian coast in 1622. Brookes stole the Tryall’s cargo of silver and claimed he had been wrecked hundreds of miles away to deter the discovery of his theft.

Hanky-panky: Most of the First Fleeters were thieves. Of the 759 convicts, 28 had committed no crime other than handkerchief theft, another 78 had stolen goods that included handkerchiefs, and a further 225 stole other cloth goods (handkerchief precursors). Edward Perkins stole a chicken, John Price a goose and Henry Vincent a cask of currants. Nicholas English stole hair powder. John Nicholls went one better and stole hair. William Francis was transported for seven years for stealing a book titled A Summary Account of the Flourishing State of the Island of Tobago. William Brice was given the same penalty for stealing a mirror (you don’t actually need to break the mirror to get seven years’ bad luck.)

Finely-knitted felony: Ireland originally transported its convicts to Sydney in Canada. Mary McLogh¬lin was transported to Sydney (the Australian one) for the uniquely Irish crime of “felony of sock”.

Man vs Goat: Cook was not a well-travelled sailor when given charge of the Endeavour. He’d never crossed the equator and was even less experienced than the ship’s goat, which had circumnavigated the globe the previous year. Cook was condemned upon his return for his expedition’s inconsistent measurements of the Transit of Venus, while the goat was given a silver collar engraved with a poem praising its double circumnavigation, penned by the famous Dr Samuel Johnson.

Swinging on the high seas: Joseph Banks, the Endeavour’s botanist, was a notorious swinger. The philosopher David Hume reported how Banks and the Earl of Sandwich, Britain’s First Lord of the Admiralty, would go on “fishing trips” with “two or three Ladies of pleasure”. When Banks resigned from Cook’s second expedition, one of his entourage, Mr Burnett, didn’t hear the news and travelled to join the expedition at Madeira. Cook wrote to the Admiralty, “Every part of Mr Burnett’s behaviour and every action tended to prove that he was a Woman”. Banks had intended to smuggle his mistress aboard the voyage by disguising her as a man.

It just ain’t Chelsea: Banks developed a lifelong prejudice against the Portuguese on the unusual grounds that “their Taste in Gardening is more trifling than Can be Conceiv’d”.

There’s something about Mary: Mary Reibey, the po-faced grandmother on our $20 note, was Aus¬tralia’s first cross-dressing, horse-thieving, seal-clubbing convict entrepreneur and standover woman. Thirteen-year-old Mary eloped with another girl, dressed as a boy, assumed the name James Bur¬row, stole a horse and was sentenced to death. James went through the courts and spent months in a crowded cell without anyone realising he was a she. After the sentence was commuted, her gender was revealed during the compulsory pre-transportation bath. Mary went on to run extensive pastoral, hotel, shipping and sealing concerns in New South Wales. She expanded her empire through canny investments and a single-mindedly vicious approach to anyone who owed her money, all the while caring for seven children. Despite being convicted of beating a debtor, Mary remained a Macquarie favourite and prospered under his rule, helping him establish the Bank of New South Wales and leasing him her house to serve as its first branch.

Don’t blame the tool: In 1792, 21 Irish convicts escaped Sydney, equipped with a paper compass one of them had drawn, and started walking to China, which they believed lay about 150 miles to the north. Whenever the escapees ran into an obstacle, the one holding the paper would simply rotate it so that the arrow pointed towards a clearer path. Two died and four were seriously injured — they managed to escape an impressive 26 miles.

Early intervention: In 1798, another group of Irish prisoners decided to run away to a secret white empire that they believed lay about 300 miles south-west of Sydney. Governor Hunter got wind of their plan and, concerned for their welfare, organised the only state-sponsored prison breakout in Australian history, providing the escapees with provisions and an armed escort.

Creative accounting: Lachlan Macquarie had a proud history of financial fraud before being appointed New South Wales’ governor. He breached a legal agreement that prevented him from access¬ing his first wife’s money; gained early access to the wages of his regiment and invested them for his own benefit; evaded tax by claiming £3,000 worth of shares he owned were the property of his brother and £1,000 found in his house belonged to an unusually wealthy servant; had a dispute with the British Army’s paymaster in India over the size of his liquor bills; and created fake military commissions for children in his extended family aged as young as five, enabling them to draw military pay.

Bass Strait? Matthew Flinders wrote his “good sailing buddy”, George Bass, a letter in 1800 that lay undiscovered until 1998. It contained the following lines: There was a time, when I was so completely wrapped up in you, that no conversation but yours could give me any degree of pleasure; your footsteps on the quarterdeck over my head, took me from my book, and brought me upon deck to walk with you … and yet it is not clear to me that I love you en¬tirely; at least my affection for Wiles reaches farther into my heart — I would take him into the same skin as me! The letter was opened and read by the new Mrs Bass, who scrawled an alarmed note to her husband on its envelope: This George is written by a Man that bears a bad Character no one has seen this letter but I could tell you many things that make me dislike him.

Girt: The Unauthorised History of Australia by David hunt is out now in print and ebook. Click to read more.