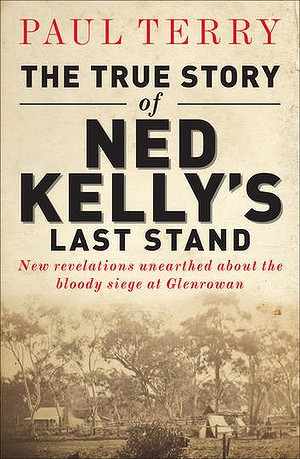 From time to time, we’ll be talking to great Australian authors about their local history and what inspired them to start writing their stories. This week we talk to Paul Terry, author of In Search of Captain Moonlite.

Paul Terry is a producer with 7 Prime, and has worked as a journalist in radio, television and newspapers in NSW, SA and Tasmania. He was part of the archaeological survey of the Kelly Gang siege site in Glenrowan, and subsequently worked as a producer on the documentary Ned Kelly Uncovered, which aired on ABC TV. He is author of The True Story of Ned Kelly’s Last Stand.

In Search of Captain Moonlite by Paul Terry | Review by Jean Bedford
Andrew George Scott was the son of Irish gentlefolk who migrated to New Zealand when he was 17. By the time he was 23 he’d fought in the New Zealand Wars and had been decommissioned for malingering after a wound. Already known as Captain Moonlite (he spelt it Moonlight), he set off for Australia, where he would become one of our most enigmatic and complex outlaws. A charismatic lay preacher, a surveyor, conman, charming companion and bushranger, George Scott betrayed most of his business partners and stole from others, spending the money on fine clothes and drink. He served time for fraud and bank robbery. He was homosexual and possibly bisexual — he seems to have had several relationships with women. His dying wish, to be buried next to his lover James Nesbitt, was not granted until 100 years later. This highly readable book sources newly discovered archival material to flesh out the life and personality of the mysterious Moonlite.

Paul: I’ve always been interested in writing and history, but it wasn’t until 2008 that a conversation with a TV cameraman mate at the pub led me to become involved in the story of Ned Kelly. We decided over a beer or two to film the upcoming archaeological survey of the Kelly Gang siege site at Glenrowan, in the hope of making a documentary. Luckily, we ended up working for a company called Renegade Films who made a film about the dig, hosted by Tony Robinson of Time Team and Blackadder fame. I became so interested in the Kelly story that I later took a chance on writing a book on Ned, as seen through the results of the dig, and was fortunate enough to find a publisher in Allen and Unwin. The True Story of Ned Kelly’s Last Stand followed and, thinking that perhaps I could turn my hand to writing, I soon began researching In Search of Captain Moonlite.

Paul: The State Library of Victoria was a tremendous help, especially with Ned, but special thanks should also go to the historical non-fiction author’s friend, Trove. We are very lucky to have Australian newspapers so effectively catalogued and accessible at the click of a mouse – so, well done to the National Library of Australia!

IHM: Q. What resources did you come across when researching your books that hasn’t been widely used?

Paul: Obviously, in the case of “Ned”, the opportunity to take part in the archaeological excavation was a rare and wonderful experience. I literally could not have got started without it so I’m forever thankful that my mate and I decided to go to the pub that night! My interest in Captain Moonlite began when I heard about a cache of rarely-seen documents that shed new light on Moonlite’s spectacular life. This was enough to begin a biography of a man who deserves to be better known by all Australians. His story reads like a thriller – but I doubt even the most inventive novelist could match it. More broadly, researching books leads you to all sorts of people in large and small pockets of the country who have special knowledge of their communities, their local history and the subject you’re researching. These people are too numerous to mention here but all of them helped to add extra layers to the stories I investigated. I really appreciate their help.

Paul: The excavation of the Kelly Gang siege site was a moving experience. There’s something special about being able to physically hold items that were directly involved in important historic events. The many spent bullets that were recovered from the Glenrowan Inn’s foundations drive home to me just how violent the siege really was. This was not an abstract, dusty memory from the history books; it was a place where people died horribly and the bullets fired by the police that night were proof of that. But what really made me stop and think was the discovery of a glass marble – a child’s toy – deep in the earth. The archaeologists were able to establish that the marble derived from the household of Ann Jones the innkeeper during the time of the siege. Ann’s son Jack died – quite horribly – during the gunfight and I like to think the marble had belonged to him. Perhaps it took some imagination to make that connection, but it sent a little shiver down my spine when I held that marble in my hand. It’s always important to remember that history is the stories of real people in all their tragedies and triumphs. When I researched Captain Moonlite I was struck by the depth of his love for his gang member, James Nesbitt, and the utter despair that Moonlite felt at James’s death. This raw emotion remains, in my mind, the driving force behind the story. And there’s something rather nice about a man being buried next to his soul mate, even if he had to wait more than a century for it to happen.

My next book will be about Banjo Paterson. We all know he wrote Waltzing Matilda, The Man From Snowy River, and Clancy of the Overflow but most people perhaps don’t know that he had a great sense of humour. He was very reserved and very dry but I think his wry observations are timeless and some of his work still makes me smile.

Paul: I’d like to discover what Ned Kelly intended to do after wrecking the train at Glenrowan. Did he really plan to set up a republic with himself as president? I suspect he did. After all, what would have been the point in causing so much carnage if there wasn’t a structure in place to change things? There is much I’d like to ask Moonlite, including what really happened on the night that the bank was robbed in the little town of Egerton, Victoria? And who was the mysterious Mrs Ames who was there for him at the end? But even if we could ask him today, I doubt he’d tell us the truth.

Paul: I think the hardest thing is to find a good story, or a great new way of telling an old story. Once you’ve done that, the words will flow. But perhaps the best advice is simply to keep on researching and writing, even if you get a few knockbacks. Most of all, enjoy yourself. If you love what you’re doing then the results will follow.

Paul: I just tried to get to know the characters as well as I could and then tell their stories in a way that a modern readership could relate to. But the thing to remember is that people haven’t changed much over the years. The same things are important to us all and I suspect they always have been.

Paul: That’s a good question. The short answer is that I don’t! I can tell when what I’ve written is not very good but I find it harder to tell when it does hit the mark. I usually get my wife to read early drafts. She’s intensely honest and if she says she likes it, I feel pretty confident. If she’s not so impressed then I start again. Overall though, if I’m really having fun while writing something then I can feel cautiously optimistic that it might work out OK