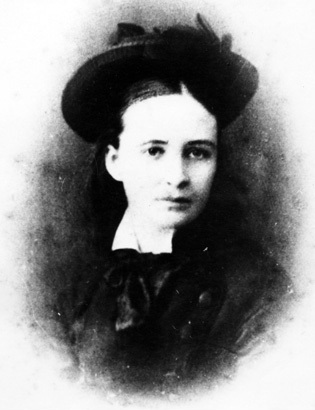 It’s a tale of two heroines, both with the same name. Grace Bussell was only 16 years old when, in 1876, she made headlines around the world for a daring rescue of roughly 50 survivors from the SS Georgette shipwreck off the Western Australian coast.

In issue 18 of Inside History, we explored a similarly heroic shipwreck rescue – by Englishwoman Grace Darling in the Faroe Islands, 1838 – alongside a brief article on Grace Bussell. In this expanded version of the article, Sarah Trevor and Jan Matthews tell the full story of how Australia’s heroic Grace, along with a comparatively unsung hero, helped rescue the SS Georgette survivors on that fateful evening.

In the shipwreck-strewn south-western corner of Western Australia, near Margaret River, the SS Georgette met a tragic end on 1 December 1876.

Carrying 50 or so passengers, and a cargo of jarrah wood, the steamer developed a leak. In the early hours of the following morning, the Georgette slowly surrendered itself to the sea.

Just seven months earlier, the Georgette had been caught up in another momentous event of Western Australian maritime history. When a group of six gaoled Fenians escaped Fremantle Prison aboard the American whaler, the Catalpa, the heavily-armed Georgette was sent in pursuit. The two vessels came to a confrontation. Pointing to the Catalpa’s American flag, its captain reminded his pursuers of the potential diplomatic repercussions of any incident in international waters. The Georgette returned to Fremantle as the whaler set out for New York where the escapees would later meet a warm welcome.

That excitement aside, the Georgette resumed its schedule of trade and passenger service along the Western Australian coastline. Bound for Adelaide, the steamship was on one of these journeys when it came to its decisive end.

In the early hours of 1 December, 1876, an Indigenous stockman by the name of Sam Yebble Isaacs spotted the Georgette in obvious distress and likely to founder. On horseback, he hurried the 20-kilometre journey to Wallcliffe House, where the Bussell family lived, and rushed into his employer’s homestead bearing news of the tragedy unfolding.

The Georgette had developed a leak soon after rounding Cape Naturaliste and the situation gradually got worse as the water rose and put out the engine fires. At 9am the Captain could see no alternative but to turn for shore and lower the lifeboat and the captain’s gig. In the operation, 15 to 20 miles offshore and north of Cape Leeuwin, the loaded lifeboat was smashed against the Georgette’s side and broken, resulting in the drowning of two women and five children before the survivors could be hauled into the gig as the Georgette, under sail, limped from sight.

The gig contained four crew, four women, four children and the brothers William and James Dempster, pastoralists who had been passengers on the boat. All the men had shown great courage and resourcefulness in coping with the disaster and saving lives. Seamen Dewar and Noonan and the Dempster brothers were awarded certificates by the Royal Humane Society for their efforts.

The gig, at the mercy of the wind and the ocean, drifted for miles up the coast before a makeshift sail was rigged from a baby’s blanket and an oar and the gig managed to make land at Injidup at 10pm after some 13 hours at sea. The party collapsed gratefully on the beach and were subsequently rescued and taken in by local families for comfort, food and rest.

The Georgette had, in the meantime, wrecked at Calgardup Bay at 3 o’clock that afternoon.

Grace Bussell, just 16 years old, acted quickly when she heard Sam’s news. She and Sam galloped to Calgardup Bay, where the steamer was already aground.

A riveting account in The Inquirer & Commercial News on 31 January 1877 reports what happened next:

…they were all in the water and in the greatest danger when, on the top of the steep cliff, appeared a young lady on horseback… They did not think a horse could come down that cliff, but down that dangerous place this young lady rode at speed; there were lives to be saved, and, with the same fearless and chivalrous bravery that urged Grace Darling to peril her life for her fellow creatures, and gave her a name in all English history thereafter, Grace Bussell rode down that cliff, urged her horse into the boiling surf, and out beyond the second line of roaring breakers, till she reached the boat when [sic] the women and children were in such peril.

Grace and Sam struggled on horseback through the raging waves. They collected the survivors – who desperately clutched at their clothes, horses, anything they could grab hold of – and took them to the beach nearby where they were safely landed. Four exhausting hours later, the pair had rescued all the survivors.

Later, as The Argus reported on 28 December 1876, the Bussell family provided shelter, food, and ‘material aid to the storm-buffeted wayfarers’. It enhanced the reputation of Alfred Bussell and his family, who had been pioneers in the local area.

Grace and Sam were undoubtedly courageous in assisting with the rescue of the passengers and crew from the Georgette but the hyperbole that became associated with their deed is a little at odds with the sworn statements of the ship’s owner and two “respectable” passengers on the Georgette who experienced the wreck and viewed the scene as it unfolded.

Though acknowledging with admiration Grace’s brave actions, they observed that a line had already been secured to the shore before Grace and Sam arrived and the evacuation of the ship was proceeding. However, the pinnace loaded with passengers made heavy weather of the surf and had overturned.

Grace rode into the surf and her horse’s legs became entangled in the line before she freed herself and rescued a lady and her child clinging to the upturned boat, while the other passengers struggled to shore. Sam rescued another passenger in trouble and who was in danger of being swept out to sea.

It was estimated that the water in which the rescue took place was about four feet (about 1.2 metres) deep, and the surf was heavy, but all passengers and crew eventually came safely to land. Sam and Grace rode back to Wallcliffe and came back with blankets and provisions before many of the passengers were taken back there and cared for.

Widely commended for her heroism, Grace became known as the ‘Western Australian Grace Darling’. Much like her English namesake of decades earlier, her rescue was reported around Australia and the world, and even commemorated in poetry. For her bravery, the Royal Humane Society awarded Grace a silver medal and gold watch, while Sam received a bronze medal. The British Board of Trade also presented Grace with a gold watch.

In comparison to Grace, Sam received little public recognition at the time. Many newspaper accounts underplayed his role in the rescue. Newspapers that did mention him often failed to even record his name, referring to him as the ‘black servant’ or ‘stockman’.

According to stories passed down in the Isaacs family, shared online by his grandson Vic, Sam settled on 100 acres near Wallcliffe granted to him in 1897 which he called Fernbrook. He set about clearing the land and building a house for his large family. He lived a busy life as a farmer and bushman until his death in 1920. Sam and his family were highly respected in the district.

Meanwhile, Bussell family stories hold that a young Perth surveyor by the name of Frederick Drake-Brockman heard of Grace’s bravery and, promptly deciding that she was his future wife, rode 300 kilometres on horseback to meet her. The couple later married. Their two sons, Edmund and Geoffrey, went on to become decorated World War One heroes, and Edmund later served as a judge and politician. Frederick, during his appointment as Surveyor-General of Western Australia, named the townships of Gracetown and Lake Grace after his heroic wife. Grace died in Guildford, Western Australia in 1935.

As for what became of the SS Georgette, the disaster was blamed on its captain, John Godfrey. Though he was later found not guilty on five counts of negligence, his captain’s certificate was suspended for 18 months.

Today, the ship’s bell is on display among the collections of the Augusta Historical Museum. At Redgate Beach, the site of the rescue, a plaque commemorating Grace’s bravery overlooks the shadows of the shipwreck that still lingers in Calgardup Bay.

This post was expanded and corrected with many thanks to Jan Matthews, Margaret River & Districts Historical Society.