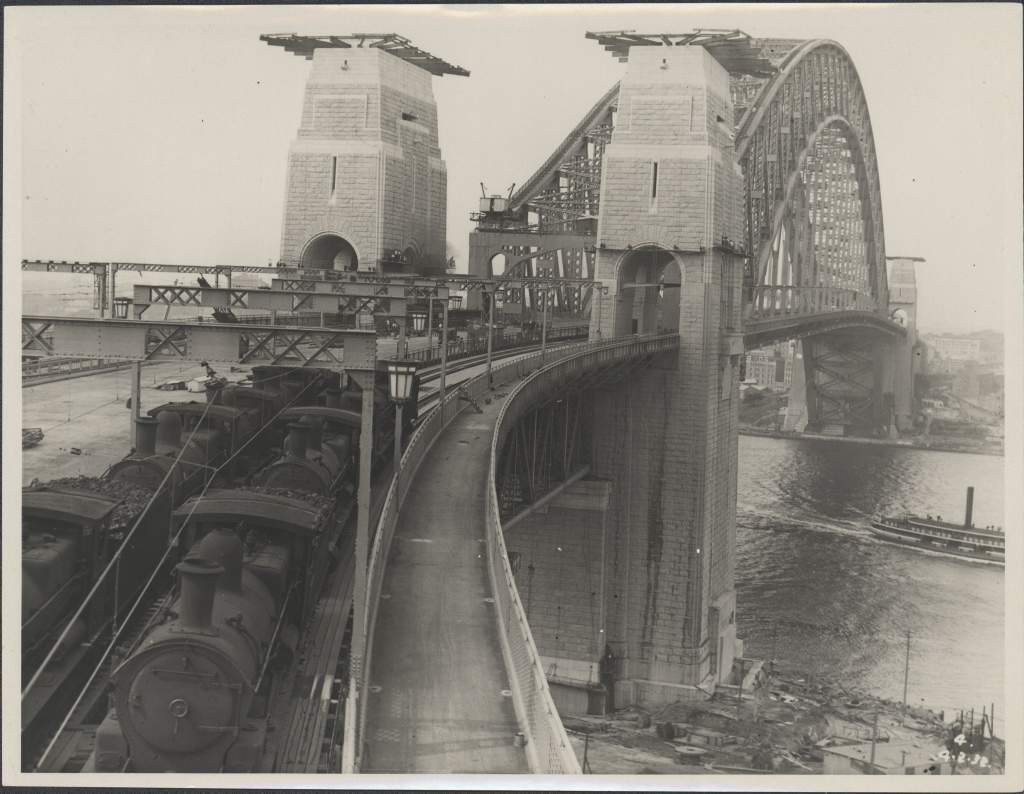 Home > Blog > Featured > To Make a Bridge. Where did the granite of the Sydney Harbour Bridge come from?

In 1924, John Gilmore and his young family came to Australia  from Scotland to partake in the flurry of industry surrounding the construction of the Sydney Harbour Bridge. He became quarry manager in the small south coast town of Moruya, from whose quarries came the granite that built the famous bridge. Gilmore’s great grand-daughter, Christine Adams tells the story of how the Harbour Bridge changed the face of Moruya.

How many ‘Sydney siders’ have seen or even heard of the little town on the far south coast of New South Wales called Moruya? During construction of the Sydney Harbour Bridge, Moruya was a hive of activity as it supplied the granite to face the piers and pylons.

Moruya granite had been used in many buildings and structures in Sydney and the local area.  It’s quality was first noticed by Captain John Ross who operated the Pilot Station at South Head, Moruya.  He thought it was the finest granite outside Aberdeen, Scotland. It was first quarried in Moruya in the 1860s for the columns of Sydney GPO, the base of the Captain Cook statue in Hyde Park and the head office of the Bank of New South Wales.

For some time Sydney had needed a bridge. Ferries crowded the harbour and residents called for a bridge to link rail and tram lines on the North Shore with those on the south.

Dr John Bradfield was an outstanding civil engineer who had studied the designs for the proposed bridge.  He wanted a bridge that not only looked sturdy but was sturdy.

Dorman, Long and Company of Middlesbrough, England won the tender for the job to build Sydney’s bridge.  They had seven designs for the bridge, one of which would capture Bradfield’s attention. Design A3 was an arch bridge with two pylons at either end.  The pylons hold no structural significance at all.  They are merely decorative. Bradfield decided that the bridge supports and the pylons would be faced with granite. He had visited Moruya (305 kilometres south of Sydney) in 1921.  The quality and ease of access to the granite situated on the banks of the Moruya River made it ideal for the project.

The Government agreed to lease the site to Dorman, Long and Company for the duration on the bridge construction. Dorman, Long and Company advertised for positions at the quarry.  One such position was that of ‘Quarry Manager’. John Gilmore was a brilliant Scottish stonemason. He had worked in quarries in Canada, Kemnay, Rubislaw, Brechin and Ailsa Craig. It was while he was Manager of the quarry on Ailsa Craig on the firth of Clyde in Scotland quarrying granite for the American War Memorial in Edinburgh, that his wife Mary noticed the advertisement in the newspaper that had come wrapped around some meat. She wrote out the application, John went for the interview in London and he was offered the position.

John, Mary and their nine children had six weeks to dispose of goods, pack a few of their belongings and say goodbye to family and friends before setting off on a six week voyage on the SS Ascanius to Australia.  They left London on the 13 September 1924.

When they arrived in Sydney, John went to the site where the bridge was to stand and the family spent a few days sight-seeing.  Nell (John and Mary’s fifth child) was able to recall the voyage to Australia as a trip of luxury.  She remembers seeing the beautiful harbour as they came through Sydney Heads and visiting the zoo and the Botanic Gardens. The family then continued their journey to Moruya by the small steamer the Bermagui.  Due to unfavourable weather, they had to stop in Batemans Bay for a few days then continued the final few miles by service car. Once in Moruya, John went to survey the quarry.  The first sod on the site was turned on the 18th November 1924, clearing scrub and overburden.

Dorman, Long and Company had organised some houses for the office workers to reside.  Mary Gilmore chose a home on the southern side of the river called “Tuffwood”.  To start with, John would ride a horse he was given to work at the quarry (on the northern side of the river).  Later, a launch was purchased so John just had to travel across the river to work.

Over the next few months, building material and machinery was shipped to the site.  A wharf was built and a power house, sheds and an office were constructed.  A blacksmith’s shop generated and repaired tools. A crushing plant ensured any waste or discarded pieces of granite were crushed and stored in large bins and moved by conveyor belt to the boats to be used as ballast for the journey and once at the bridge site, used in the concrete and road base. Railway lines lead through the site and to the wharf.  Cranes were assembled and used to move the blocks.

For the first year, mainly Australian men were employed.  As there was a shortage of skilled stonemasons in Australia, Dorman, Long had to look elsewhere.  Scottish and Italian stonemasons were brought to Australia with their families. When the new recruitments and their families arrived, a photograph was taken to commemorate the occasion.  The youngest daughter of John Gilmore, Jean (at the age of three) told the photographer, for the ‘Sydney Mail’ in 1926, that she had “come a’ way frae Scotland tae mak’ a brig.”

A small village, that became known as was constructed just to the west of the quarry to accommodate the workers and their families.  It consisted of Bachelor’s quarters, a post office, a co-operative store, 72 cottages, a school and a hall.

By 1927 the work was in full swing.  Mary Gilmore recalled, “where a few years before the only sound heard there was the call of the wild birds flying overhead to their feeding grounds in the swamp, the laughter of the kookaburra and the music of the magpies in the bush, there was now the roar of machinery and the sharp sound of automatic drills in the hard rock, cranes lifting boulders and the occasional blasting of the huge rock.

What excitement for Granitetown youngsters who had lived penned up in tenement houses in a cold climate where they never knew the fun of exploring in the bush and going after bunnies unchecked by gamekeepers.  Not much wonder they took to the new life like ducks to the water.  Indeed Granitetown was a “happy place for growing children.”

Ruby Grant, in her memoirs Granitetown Memories, remembers the excitement she felt when arriving in Granitetown.  Her mother however, was horrified when she walked into the four roomed cottage and saw the paraffin lamps.  Basic furnishings such as a stove, a table and four chairs, beds, mattresses and some linen were provided by the company.  There was no sink in the kitchen, only a tap out the back.  The outside lavatory was shared with your neighbour.  Ruby recalls her mother saying, “What have we come to?” Masons paid 11 shillings a week for rent that was deducted from their wages. 240 men were employed at the quarry during the seven years of its operation.  They were mostly stonemasons, quarrymen and labourers.

To obtain the stone, it was split away from the quarry face by drilling holes into the rock with hammer drills driven by compressed air.  Gunpowder ot blasting powder was pressed into the holes using an air drill.  Everyone would stand back, an alarm would sound and then the blast was fired by electric battery.  Gelignite was never used as it was too severe and would have shattered the rock to pieces. The stone was blasted away in large chunks then cut up into smaller workable size pieces on the floor of the quarry.