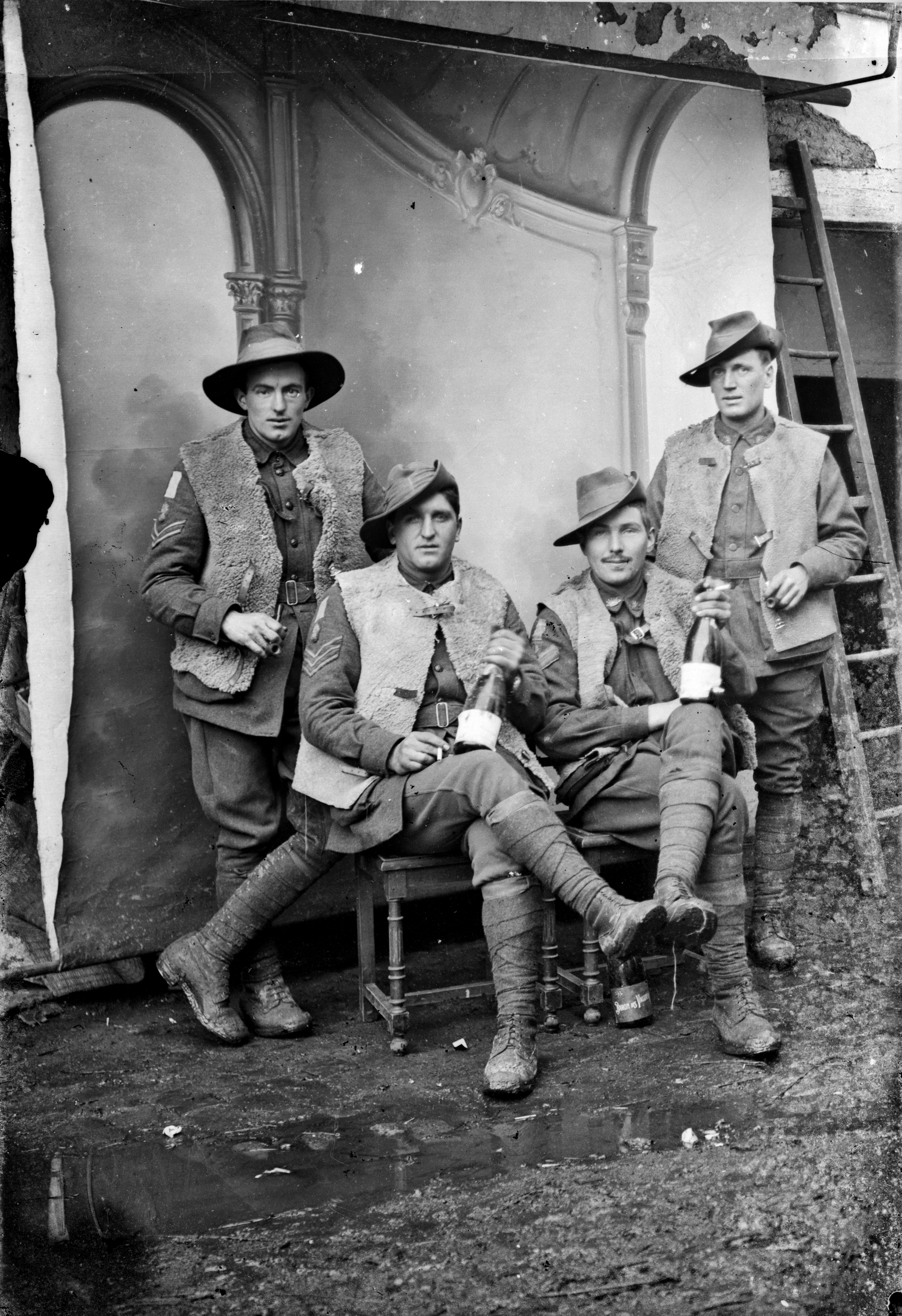 In 2011 journalist Ross Coulthart was part of the team that unearthed the collection of glass plate images of Aussie soldiers in Vignacourt. Here, Ross talks about the next chapter in the Diggers’ stories.

Don’t miss The Lost Diggers of Vignacourt, the Australian War Memorial Traveling Exhibition touring Australia. This must see exhibition is currently at the Queensland Museum South Bank before moving on to tour all the states and territories across 2014 to 2018. Click here for more information.

How did you become aware of the collection of antique glass photographic plates in a dusty attic in France?

Ross Coulthart: “In late 2010, we noticed The Independent newspaper in London was attracting a huge online audience for a handful of glass plate images of British Tommies. The paper apparently found these in a different Somme village, through French locals who reportedly retrieved them off a rubbish tip. Some of the images featured Australian Diggers in the background and we approached the paper asking if there were any more Australians. There weren’t — but it made us wonder if there were any other such collections hidden away. We approached a British historian, Paul Reed, to do some sleuthing for us but he had no luck. Eventually though, he came back with a name of an amateur French historian he’d heard about: Laurent Mirouze.

“It turned out Laurent had seen part of another, completely separate, substantial collection of the glass plate images back in the 1980s after he got a tip-off from a friend that the Vignacourt town hall had a couple of dozen prints of extraordinarily high quality on the wall of Tommies/Diggers and other allied soldiers. He was introduced to Robert Crognier, a local Vignacourt photographer, who allowed him to see some of the collection, including Australian images. Robert was a relative of the photographers, Louis and Antoinette Thuillier, who had long since passed away. Laurent scanned some of those negatives and they were the ones he showed us when we first met him at his home in the Loire Valley.

“We had independently realised that there must be a significant collection because we also obtained a brochure featuring some of the images, which the village of Vignacourt had handed out to Australian dignitaries during a commemoration ceremony in the 1980s. One of these pamphlets had found its way back to historian Peter Burness at the Australian War Memorial and he, like us, was excited by the fact that most of the images had a distinctive painted backdrop. Only a handful of images with this backdrop had ever made their way into the Memorial’s collection. Laurent’s description of the plates he’d seen decades earlier and the commemoration brochure both implied there was a collection out there waiting to be found. So we hired Laurent to try to find the surviving relatives of Louis and Antoinette. Unfortunately, in the intervening years, Robert Crognier had passed away and the Thuillier family had moved out of Vignacourt.”

How did you track down the collection?

“This was the fun part. The breakthrough came when Laurent found Robert Crognier’s widow, who was still living in Vignacourt. She finally agreed to meet us, and after a long meeting, she went into her attic and pulled out some ammunition cases. It turned out she still had some of the glass plates her husband had made prints from 25 years earlier. When she realised we wanted to bring this collection to the Memorial and see it properly preserved, she insisted we take it back to Australia: “Pour les Australiens,” she told us, pointing to the commemorative Australian plaque on her wall. Bless the French — they’ve never forgotten what our lads did there. “More importantly, Madame Crognier admitted she was aware the substantial bulk of the collection of 4000+ glass plates still existed. She introduced us to the descendants of Louis and Antoinette Thuillier. After much negotiation, they agreed to take us to the secret location, in the attic of one of the family farmhouses, where the plates were hidden. We were so lucky. The family told us they were about to sell the home and chances were they would have thrown the glass plate images away.”

Pour les Australiens,” she told us, pointing to the commemorative Australian plaque on her wall. Bless the French — they’ve never forgotten what our lads did there.”

Which are your favourite photographs?

“Two thirds of the soldiers who served in WWI became casualties. So the ones I respond to are those where they’re really letting their hair down — with a bottle of wine in one hand and a beautiful French girl sitting on their lap. They are quite unlike any other images from that era. There’s the ‘We want our Mumie’ image — the men have these handmade bracelets featuring a metal image of Australia on their wrists. They’re not the formal, stiff, posed images you often see from that era. The ones I particularly love though are those where I’ve been able to find the name and story behind the image, all of which are in my new book, The Lost Diggers.”

Which stories affected you the most?

“The ones that bring tears to my eyes are the numerous identifications we’ve been able to make of young Australians who were either horribly wounded or who died in subsequent fighting on the Somme. There is something very confronting about being able to personalise a face. The glass plate images are of such high resolution that it’s possible to zoom in on the eyes of many of these lads. You can see the pain in their eyes and when we went back through the battalion diaries, personal records and family archives, it was possible to place many of the young men on to a specific battlefield and to tell the story of the war through their eyes. All too often they didn’t survive. That’s why we have called these men and this book The Lost Diggers. So many of them never made their way into official histories but so many of the ones we’ve been able to identify served with great distinction. I take a real pride in The Lost Diggers in being able to honour those common men of uncommon valour whose contribution all too often was overlooked.”

Which resources did you find most helpful?

“The combination of the Memorial’s unit diaries and the National Archives of Australia’s individual soldier service records online was invaluable. We are so lucky in Australia that such a major effort was made to digitise so many records. It allowed us to access files from the actual battlefields and to pursue leads from the road.

“I’m extremely grateful to Peter Burness (and the entire Memorial) for his assistance. We brought Peter with us to France when we found the collection and he was often able to identify a soldier just by looking at an image. His excitement about the Thuillier images was contagious and it was Peter’s enthusiasm that underlined the significance of what we had found. The quality of the resolution of the scans meant we could zoom in on a medal ribbon and Peter’s extraordinarily encyclopaedic knowledge of battalion history meant he could often isolate who a soldier must be by looking at the picture.

“The book could not have been written without the extraordinary combination of those online archive resources with the power of social media platforms like Facebook and our Sunday Night program website. The real initial breakthroughs on identifications came when we posted every single image of the Australians online. Our Facebook pages exploded — with millions of page views from all around the world as people searched for relatives online. They would then post the reasons why they thought an image might be their relative and we’d then check to see if that was possible.”

Our Facebook pages exploded — with millions of page views from all around the world as people searched for relatives online.”

How helpful were the soldiers’ descendants in fleshing out individual stories?

“It’s been a joy to hear from people across Australia, and across the world, as they’ve contacted us to say they believe their relative might be among the images. Interestingly, more times than not, descendants were actually wrong about an identification. We often had multiple families claiming the same image was their relative. One of the most heartbreaking aspects of this research has been to have to contact a family and say that it was just not possible for their relative to be among the images. For example, one family, whose relative died in Fromelles, was convinced a great-grandfather was among the diggers. But all of the men who died at Fromelles never made it to Vignacourt — they were killed within weeks of their arrival in Europe. It underlined to us just how raw the memory still is of the losses Australian families suffered. It also made us realise how keen and how passionate people now are to know more about the period.

“One of the ways we were also able to confirm identifications was to go back through some of the very early post-WWI histories, published in the 1920s, held at the State Library of NSW. In those early histories we found some of the images had the distinctive Thuillier painted canvas backdrop. Because those prints had the names of the soldiers in them we were then able to confirm identification off the actual glass plate, which was very exciting.”