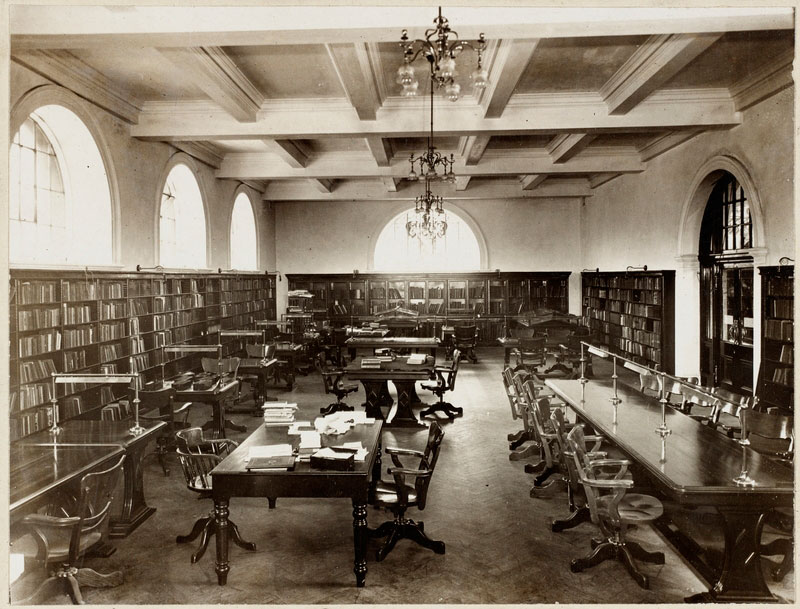 Home > Blog > Featured > The history and future of the Mitchell Library

Plans for the restoration and renewal of the State Library of NSW‘s Mitchell Library were recently revised following public feedback. Paula Grunseit speaks with Richard Neville, the tenth Mitchell Librarian, about change, history, and the future of libraries.

Richard Neville began using the Mitchell Library as an undergraduate when he was studying art history in the early 1980s. “It was a real rigmarole back then,” Neville says. “You had to have special dispensation to be allowed in. We had permission from one of our lecturers to allow us access to the pictures collection. That was unusual. To obtain a reader’s ticket in those days, you had to have two independent people sign on your behalf. Now anyone can use the collection and all we ask is that you provide two forms of ID,” he says.

Neville, a published author and a Miles Franklin Literary Award judge, has been Mitchell Librarian since 2008. He explains that for many years, the Mitchell was seen as a “postgraduate library”; undergraduates weren’t supposed to be involved.

Another key group of library researchers, family historians, were allowed access to resources but were heavily limited by the concept of “the convict stain”. As Neville explains, initially, the library was very concerned about allowing families access to information. “There was concern about skeletons in the closet to do with convict ancestry. And up until the 1960s there was a slight unease about making it widely available because the stigma of convict ancestry was so strong,” he says.

This began to change as the popularity of family history research took off in the 1960s and even more so in the 1970s. The library now provides many resources and services for family historians including relevant classes which are part of its Lifelong Learning program.

What makes the State Library and particularly the Mitchell Wing so different, so important for those who use it, is undoubtedly what Neville describes as its “physical drama” but it is also, he says, the enduring legacy of the two people who had most to do with its collections — Sir David Scott Mitchell and Sir William Dixson.

“They were both probably eccentrics,” says Neville. “Both were highly focussed and intelligent collectors. Mitchell set out each Monday to trawl the bookshops. His house was full of books and with his encyclopaedic knowledge, he knew exactly where each book was located if someone requested it. Neither of these men married and both were very wealthy.

“Dixson had a running tab with Angus & Robertson, and some months in the 1920s, that tab would be up to around 16,000 pounds! So, those two men are fundamental to the way we now write our own history. Dixson bought many paintings and Mitchell, who died in 1952, collected about 40,000 books which formed our core Australiana collection. Significant historians write from our collections and what they write seeps into the national discourse. That is such an important role that we play and that’s why libraries are so important,” Neville says.

All around the world, libraries are facing the reality of declining budgets and cuts to staffing and resources. It was in this climate that the library released its unpopular plans for changes to the Mitchell Wing in December last year.

A petition sent to State Librarian and Chief Executive Dr Alex Byrne was organised by a group including writers David Malouf, Geordie Williamson, Sally McInerney, and Evelyn Juers. The petition went viral and gathered almost 10,000 signatures eventually resulting in a rethink by the planning team and what Malouf describes as “an imaginative and elegant solution” which includes a reversal of several of the most contentious decisions.

The revised plan almost triples the space for researchers at the back of the Mitchell Reading Room and there will be seating for about 40 people behind a glass wall which will create a quiet, secure area. Special collections, manuscripts, artworks, maps and Mitchell collection books will continue to be available in the Reading Room while books and card catalogues which were moved to the Macquarie wing will return. The general public will have access to the rest of the room and will be welcome to use their own laptops and reading matter.

The Friends’ Room, a lounge located in the original first stage of the Mitchell building, will be refurbished and heritage features of the Mitchell Reading Room will be restored (the stained glass windows and fittings will be repaired, and the floor covering replaced).

Neville says: “A whole series of tensions inspired the petition and it reflected deep public sentiment so we do take all that into account. Many people see libraries as the last bastion of free, uninterrupted public space that neither government nor neoliberalism can intrude into. And the kind of drama of that space [the Mitchell Reading Room] was emblematic. We had to take that into account when we were reformulating how we wanted to approach it and it is in the context of declining budgets. It’s a very tricky area and maybe we didn’t handle it well.”

“I think the emotion was a very important factor in the entire debate. It was never about us saying that we prefer digital over physical books — a major part of my role is about collection building, collection interpretation, and negotiating acquisitions. We add 12,000 books a year to the collection and we’re constantly trying to find better ways to deliver research materials to researchers”, he says.

While the bulk of the Library’s funding has come from government (around $30 million from the former state Labor government for the eRecords project to digitise the card catalogues and $50 million from the state Liberal government over ten years to digitise), Neville says that as budgets across the board decline, “the Library wants to be able to deliver the same quality of service while living within our means.”

Staffing cuts and restructuring are an inevitable part of this process and although the State Library has a very active Foundation and a very generous core group of committed corporates as supporters, Neville says libraries in Australia struggle to attract philanthropists.

“Libraries have never had the kind of social glamour that an art gallery has,” he says. “They can attract support in ways that we can’t. We haven’t the level of support that galleries all around the world have. We are about the full democracy of collecting whereas galleries are about the elite end of it.”

“I don’t believe that our initial plans were pushing people away from the collections but I think people felt they were being pushed away from the visual, the emotional excitement of working in a space as grand as this,” he says.

“We do have to acknowledge that we live in a hybrid world now; the Internet has had a huge impact and people access information in different ways but the digital and the physical can co-exist. Although it’s tough with declining budgets, it’s also exciting and there’s so much opportunity. Of course we want people to use our collections — books are in our DNA!”

Click here for more on the revised plans to the Mitchell Library restoration. See the next page for a timeline of notable milestones at the State Library of NSW.