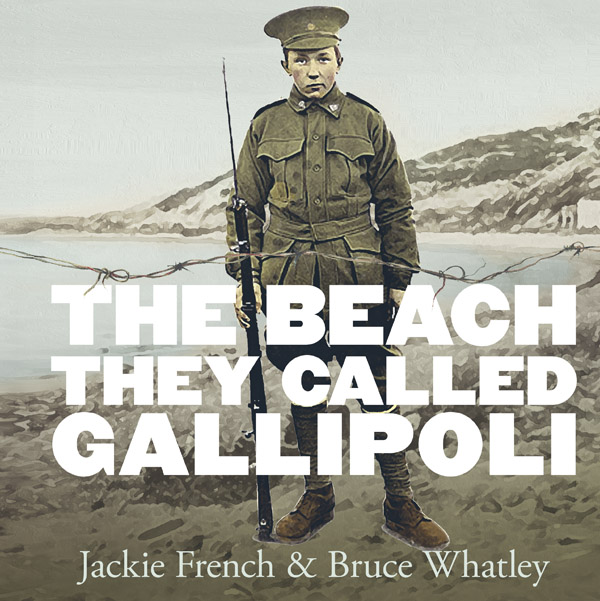 Awarding winning children’s author Jackie French and illustrator Bruce Whatley have created a beautiful children’s book with a focus on the events that occurred and the soldiers that passed through Gallipoli Beach from April to December 1915. Inside History chats with French and Whatley about their research.

Click here to read more about The Beach They Called Gallipoli and purchase a copy.

IHM: What inspired you to start researching and illustrating the stories around Gallipoli?

JF: For many years I accepted the popular canon that World War One was the most stupid of wars, fought for silly reasons. It was only after accidentally coming across a collection of letters of two nurses in Belgium, who were there when Germany invaded, and later, reading the official German records, that I realised that what I had taken to be allied propaganda was true: the atrocities against civilians and the intention of Germany to conquer England and take possession of its colonies.

Australia was seen by both sides as a British possession and an important source of raw materials. We were not as far away from danger as we might like to believe. Mostly, I became obsessed with finding the history of the Gallipoli campaign because of the sheer difficulty of finding out the truth. Every first-hand account of the landing at Anzac Cove differs. The story of those months has also been made murky by propaganda or sentimentalising, or where popular fiction has slowly become accepted as the truth.

BW: I didn’t hesitate when I was approached to illustrate The Beach They Call Gallipoli, as it is such an important story to tell. It isn’t until you start researching a subject like this that you realise how much you don’t know. So the more I looked, the more I wanted to find out. In the end I had way so much information that I couldn’t use it all.

Australia was seen by both sides as a British possession and an important source of raw materials. We were not as far away from danger as we might like to believe.

IHM: Which resources did you find most helpful?

JF: My sources were mostly from books, often self-published memoirs or collections of letters or diary entries that I have found over the decades, or unpublished material that I been given access to by the descendants of those who served in the campaign.

I strongly recommend the reader, however, to access the Australian War Memorial website and collection, as well as the publications of its historians, for further reading about the campaign.

IHM: What resources did you come across when researching your book that haven’t been used by others?

JF: I was given access to two diaries kept by men who served at Gallipoli, and they kept detailed records illegally, as keeping diaries was forbidden. I also had access to the letters from two men of the same family.  The author of one of those diaries, however, was adamant that he did not want his words made public, although he wished his diary to be preserved and read, and his descendants feel bound by his wishes.  The other is in such poor condition, with many words illegible, that only parts have been ‘translated’, but will possibly be made public at some stage.

IHM: Was there any information/artwork/photographs you uncovered that stopped you in your tracks? Which stories affected or amused you the most in the course of your research?

JF: The author of one of the diaries I used as reference went on to have a life of laughter, family, and fulfilment. He didn’t want his life to be remembered mostly as the anguish of the war years, but by the many decades after. It took courage to endure what he did, in those years of war. It took even more courage to create so much love and happiness afterwards. The ANZAC gallows humour is no myth: stories of rat races and illegal bookies taking odds on the favourites. ‘Doing the Gallipoli gallop’ was diarrhoea; stretcher-bearers were ‘body snatchers’; ‘Anzac soup’ was a shell hole filled with mud and bits of dead body.

Sometimes when you read a diary or letters it is almost as if there is a whisper, ‘remember me.’ They were real people and real events. Place them on the page truthfully and they will live.

BW: The book is a mixture of enhanced photographs and original artwork. Drawing from photographic reference requires concentration and is often a matter of echoing shapes and proportions. It is easy to get lost in the technique. With one of the trench drawings (and I’m not sure if it was one that made it to the book) I was concentrating on drawing what I thought was a rock. It was only when I got up to look at the finished drawing I realised it wasn’t a rock. It was the hand of a dead soldier.  In many ways this incident reflected the experience most of us have with regard to Gallipoli and ANZAC Day. We look, but we don’t really see. I can honestly say I didn’t find anything amusing in my research, although I was aware there was a lighter side.

IHM: If you could track down one thing you haven’t yet managed to find out, what would it be?

JF: What did happen that first day? When you try to match terrain to various accounts so much doesn’t add up. And in one of the diaries, where the day before the writer had recorded the deaths of two of his friends, the next day he wrote ‘bad day today,’ and nothing else. What had happened and was so bad that a man who could carefully write of so many horrors could not even find the words to describe it?

BW: There was a war artist who was shot. The bullet ricocheted off his paint box that was in his chest pocket. It’s in the War Memorial in Canberra. I would have loved to find out more and separate fact from fiction.

IHM: What’s your best tip for people wanting to write/illustrate a children’s history book of their own?

JF: Use primary resources. Too much history or historical fiction for young people is based on history books written for adults. If you need to research an area as you are writing, you don’t know enough to write the book.

BW: It is really important to take note and carefully record and catalogue your reference material. I spent hours retracing my steps trying to find where I got particular images from.

IHM: How did you go about bringing the characters and stories to life?

JF: Sometimes when you read a diary or letters it is almost as if there is a whisper, ‘remember me.’ They were real people and real events. Place them on the page truthfully and they will live.
BW: I felt it was very important for this book to base every image on existing photographs taken at the time. So the characters are real. No dramatising of these events could either tell the story better or do it justice.

IHM: How do you know when you’ve written/illustrates a good book?

JF:  If I cry when I read it, and not necessarily because it is sad. The deepest tears can be from the wonder at what a human can be capable of, or tears of joy.  But if the tears are there, then it has worked.

Jackie French and Bruce Whatley will discuss their collaboration at the State Library of NSW in November. For more information on this event, click here.

Click here to read more about The Beach They Called Gallipoli and purchase a copy.