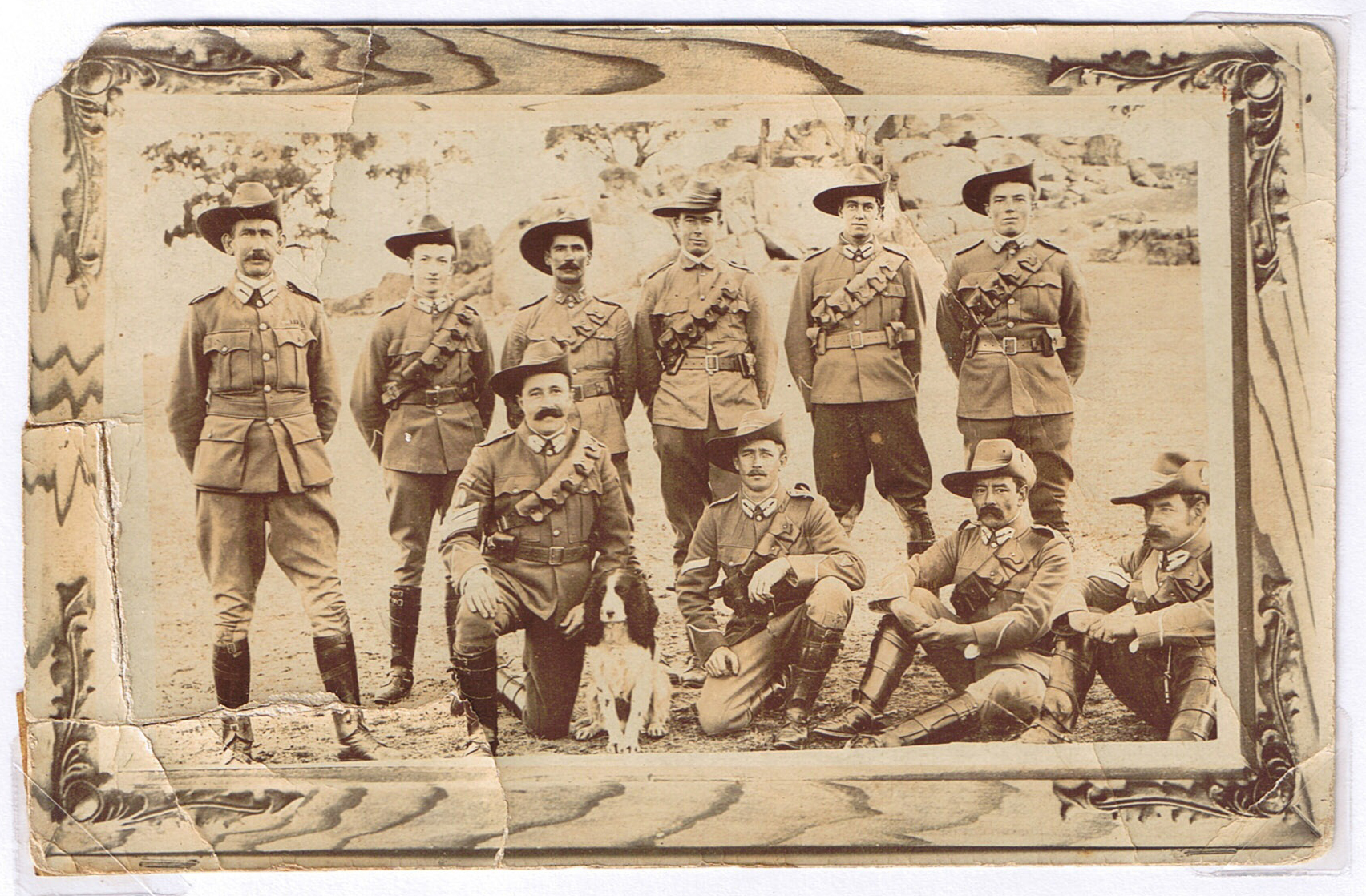 Included in a recent edition of Inside History was an article on the Boer War and the Australian recipients of the Victoria Cross. One of these venerated soldiers was Leslie Cecil Maygar from Longwood in Victoria. In the above photograph, Captain Maygar is standing to the left of a group of soldiers from the Victorian Mounted Rifles at the Longwood rifle range c. 1908-09. Maygars Hill was named after him and it can be seen on the eastern side of the Hume Freeway near Longwood. The photograph is displayed courtesy of the Euroa Historical Society.

Of additional interest in the photograph is the presence of a future Victoria Cross winner. The soldier kneeling second from the left in the front row is Lance Corporal Frederick Harold Tubb. At Gallipoli on 9 August 1915, Lieutenant Tubb and another soldier from the same area in Victoria, Corporal Alexander Stewart Burton (a friend of Tubb, but not included in the photograph) were involved in the desperate fighting in the trenches at Lone Pine and were both awarded the Victoria Cross. Burton did not survive the battle. They were both members of Lieutenant Colonel Harold Elliott’s 7th Battalion, but Elliott’s sterling efforts went largely unrecognised despite his unit’s heroic action.  Tubb was wounded, evacuated to England and subsequently returned briefly to Longwood. Feigning physical fitness, Tubb was posted back to the Western Front, but died of wounds in battle at Polygon Wood, Third Battle of Ypres in 1917. Tubb Hill at Longwood is named after him. A third soldier fighting alongside Tubb and Burton at Lone Pine was Corporal William Dunston who also won the Victoria Cross there. In later life, Dunston became the well-respected general manager of the Herald newspaper group in Melbourne.

Two other soldiers prominent in the photograph are the Kong-Meng brothers seated together in the front row on the right. Along with their sister Alice, they settled in Longwood after the death of their father the prominent Melbourne businessman Lowe Kong-Meng. Lowe has the distinction of being included in the Australian Dictionary of Biography. Born in Penang, he was a proud British subject and became both a successful merchant and Chinese community leader. He was well educated and was elected by the Victorian Government as a commissioner for the Melbourne Exhibitions of 1880 and 1888. He married Mary Ann Prussia from Tasmania in 1860 and on his death in 1888, he was survived by his wife and 12 children.

As residents of Longwood, the Kong-Meng brothers became active members of the Victorian Mounted Rifles prior to the First World War. Eventually they both fought for King and country during the War, but this was not without incident. George Kong-Meng’s letter to the Argus newspaper in Melbourne published on 24 January 1916 tells a tale of frustration and discrimination. Under the heading of “Recruiting Stupidity”, George told of his experience in the recruiting office of being deemed unsuitable because he was not “substantially of European origin”. On the following day, in a supportive riposte from the Argus, other ethnic groups who were already fighting for the British Empire or allied with it, were cited:

Sir, – Having answered the Prime Minister’s appeal for recruits, I journeyed to Melbourne to offer my services to my country. I attended the recruiting depot at the Melbourne Town Hall on Friday the 14th inst., and after giving my name age and religion to the recruiting sergeant I was sent in with some others to the examining room and told to undress preparatory to the medical officer examining me as to my physical fitness… When leaving the depot I received a certificate with “not substantially of European origin” written on it and signed by the medical officer Captain N.J. Gerrard… The Prime Minister has appealed to every man of military age to join the colours; but, if this is the treatment the native born are to receive I am afraid the appeal will fall on deaf ears. England and France deem it is fit to use coloured troops to defend their shores but the great Australian democracy denies its own subjects the same opportunity… – George Kong-Meng

The Prime Minister has appealed to every man of military age to join the colours; but, if this is the treatment the native born are to receive I am afraid the appeal will fall on deaf ears.

There seems to be no good and sufficient reason for the refusal to allow Mr. George Kong-Meng to serve with his fellow Australians at the front. His father will be remembered by older residents as a gentleman of great public spirit, scrupulously honourable in all his dealings, and very highly esteemed by the citizens. He was a native of the Straits Settlement, a British subject born within the Empire. He married a Tasmanian lady, who became the mother of  Mr. George Kong-Meng and of his brother Sergeant Kong-Meng, who is now at the front. They are Australian natives. It is alleged that Mr. George Kong-Meng is “not substantially of European origin.” Maoris are not substantially of European origin; neither are members of the various Indian regiments; neither are our allies the Japanese…  – The Argus (25 January 1916)

The enigmatic backdrop to George Kong-Meng’s fruitless journey to the recruiting depot at the Melbourne Town Hall was the approaching referendum in Australia to be held on 28 October 1916. Initially, numbers joining the Australian Imperial Force were high, but by 1916 enlistments had dropped markedly. The Australian Prime Minister William Morris Hughes on returning from a visit to Europe, wanted Australia to provide more servicemen to support the War. He pressed for a referendum to allow citizens to be compelled to serve overseas. Opposition to Hughes’ advocacy for conscription was considerable, particularly from the union movement where the firebrand speaker and future wartime Prime Minister John Curtin held sway. Despite being plagued by depression and alcoholism, Curtin was a formidable opponent. The referendum although close, rejected Hughes’ patriotic speeches. Because the majority of Labor Party members did not support the referendum, a split in the Party ensued. However Hughes retained power by forming a new National Party from a coalition of Members. Hughes took the conscription issue back to the people by referendum on 20 December 1917, but it was again rejected by a greater majority.

With recruiting numbers further dwindling as the War dragged on, George Kong-Meng was eventually accepted into the ranks. His brother Herbert attained the rank of Sergeant in the 1st Australian Division before he was invalided back to Australia. George’s experience throws some light on the difficulties facing other ethnicities, including Aboriginal Australians, in enlisting at the time.

A new memorial to honour the Victoria Cross recipients from the Longwood area will be opened at Euroa as part of the centenary commemorations on 16th November 2014 – click here for more details.

This article was written by Rowan Tracey in memory of the historian and prolific contributor to the Australian Dictionary of Biography G.P.Walsh. Walsh wrote the entry for Alexander Burton VC.