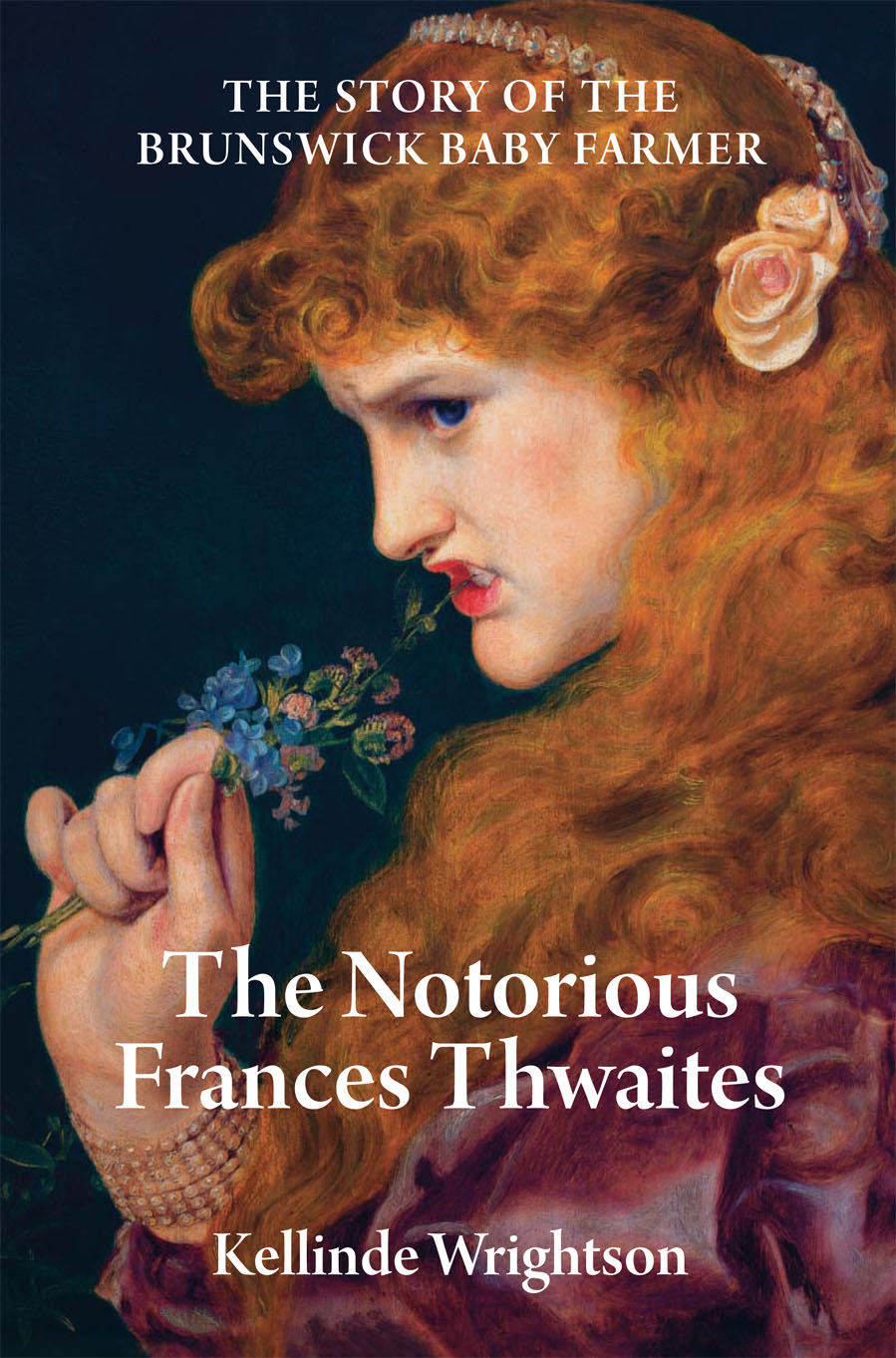 In colonial Australia, Brunswick baby farmer Frances Thwaites – hung for her alleged crimes in 1894 – was as notorious as Ned Kelly. Her tragic life inspired Kellinde Wrightson to write a historical true crime novel, The Notorious Frances Thwaites (Brandl & Schlesinger): the first in a trilogy. Here, Kellinde explains how she researched Frances’ life and times – and why she believes that Frances was innocent.

IHM: What drew you to the story of Frances Thwaites?
Kellinde: I thought she was innocent. I first heard about her case when I was working in law. I was intrigued by the fact that there was no hard evidence she’d killed anyone. It was all circumstantial and it was highly political too with her trial becoming the government’s chance to redeem itself in the eyes of the public which thought the government wasn’t doing enough about the high infant death rate.

Babies died all the time in the late 1800s and funerals were expensive so finding babies bodies in your back garden or in public places – hidden under bushes or in garbage bins or rivers – was common. Often they died from ignorance about infant health needs. For instance, people thought back then that you could mix arrowroot with water and feed it to a newborn and that was perfectly fine, but very young babies can’t properly digest it and sometimes they died either from malnutrition because they couldn’t keep the stuff down or convulsions or other complications, which is what happened to Frances.

It didn’t take long before I thought she was hanged for nothing.

She was a seriously scattered-brained young woman and prone to making the worst possible decisions, and that made her a pretty easy target, but you can’t hang someone for that. She was 27 years old and the mother of two infant girls and she was hanged for nothing.

IHM: The Notorious Frances Thwaites is a meticulously-researched novel drawn upon seven years of research. What were some of the challenges involved in bringing Frances’s story to life?
Kellinde: The biggest challenge wasn’t the research itself since I’d worked for many years as a professional researcher both in the humanities and law. The biggest challenge was negotiating her headspace and, in fact, getting out of her head space once I’d gotten into it. I wanted to tell her story so I felt I had to be her.

It wasn’t always a pleasant experience. She’s not only all over the shop, she’s frustrating. She yearned, deeply craved, a quiet, normal sort of life where she could find happiness and peace, but she messed up every chance she got at it.

The thing is, I think, that when her heart was involved – like it was with Ted Thompson, who threw her under the bus instead of owning up to his own role in the whole mess that led to her arrest and her execution – all reason went out the window. She was incapable of making a reasoned decision. Everything she did centred around her heart and her feelings. She was like Mariane from Sense and Sensibility on steroids. She was always like it. That’s why her parents packed her up and sent her off to Australia. They said she was too strong willed and wouldn’t listen to reason.

IHM: It’s been said that in 1890s Australia, Frances Thwaites was as notorious as Ned Kelly. How was she viewed and treated by society and the colonial justice system at the time?
Kellinde: The colonial press loved her. So did the government. She was a ready-made solution to their problems. You could have pinned just about anything on her. Everything she did was controversial or courted criticism of some sort from some quarter.

As far as the press and the public went, you couldn’t have made up a better story. There was the rebellious teenage girl with a love of fashion, the running off with a soldier, parentally enforced deportation, petty theft, prison, a marriage of convenience, poverty, mental illness, adultery, a love child, life on the run, a hangman who cut his own throat rather than do his job. Even her arrest while giving birth to her love child with her husband by her side was better than fiction. The press and the public couldn’t get enough.

She was a pretty girl from a good family in London with everything going for her except that she had a will of her own. She didn’t want to toe the line. She didn’t want to do what every other girl her age did. She wanted to do her own thing. And she didn’t see why she shouldn’t. Of course, in the end, she paid the ultimate price for it.

The police focused on her rather than her husband Rudolph and her lover Ted, who were both as up to their necks in the whole business as she was. The reason the Crown decided to go for her rather than Rudolph was that they didn’t want a repeat of the Makin baby farming case in Sydney where the husband was hanged and the wife got off with life imprisonment instead. They wanted Frances to hang regardless of how guilty Rudolph was. It was unjust. The colonial system was notorious for being tough. Frances was found guilty of murder by an all-male jury (standard for the time) on the basis of circumstantial evidence alone. Although, that said, so was Keli Lane not so very long ago!

IHM: Could you tell us a bit more about the practice of baby farming in Australian society?
Kellinde: Baby farming was the 19th-century version of home-based child care, only it was for some time unregulated, unsupervised, and unenforced. Most of the women who used it were poor single mothers who had to work and had no one to look after their babies. Many of those mothers were domestic servants who could never let their employers know they’d even had a baby because they’d be sacked without a reference and very little chance, if any, of ever getting work again. The farms, and most of them were legitimate, offered a way forward as long as the mothers could pay for the upkeep of their children and keep it a secret.

Some farms, however, and these were not the majority, were operated by unscrupulous types, both men and women, who either let the babies die of starvation or killed them, and took the money from the mothers anyway giving flimsy excuses like, “Oh I’m sorry. You can’t see your baby today. She’s sleeping. Come back next week.” These were the horror cases that made the public demand that the government do something.

There was no evidence whatsoever that Frances operated like this. In fact, the affidavits and witness testimonies in court attested to the opposite. Frances was said to be an affectionate, kind and generous carer of children. Rudolph, however, was said to be unscrupulous by a number of women who said he dumped babies on them to mind, he sub-farmed, and then did a runner without paying them. For the most part it was Rudolph who organised and ran the farm. He wrote out the contracts. Frances did the minding.

IHM: Which resources did you find most helpful in the course of your research?
Kellinde: From a professional perspective the most helpful were by far the legal and police documents, not just the official law report of the Supreme Court of Victoria trial, but the typescripts from the inquests and trial, the affidavits, the solicitors’ notes, the police notes, the letters to and from Frances while in prison, the prison guards’ written comments. Everything that was gathered during the course of the lead up to the inquest and then the trial was really helpful in piecing together a picture of what was happening.

From a personal perspective, however, Frances’ letters were the most helpful in getting a sense of who she was.

Her children were everything. She wrote eloquently about her fears for them if she were hanged. In fact, this was one of the rare times that she thought with her head instead of her heart because she knew very well those two girls would end up in the industrial schools where they’d be subjected to horrific abuse.

And yet, true to form, I suppose, in the end this reasonable and logical fear led to her doing the worst possible thing she could have done and that was to write to Ted asking him to find witnesses willing to give false testimony in her favour and to pay them. That letter ended up in the hands of the Crown and in the eyes of the all-male jury it proved her guilt, for what other reason could there be to try to get false witnesses? One could, of course, say that any mother would have done the same.