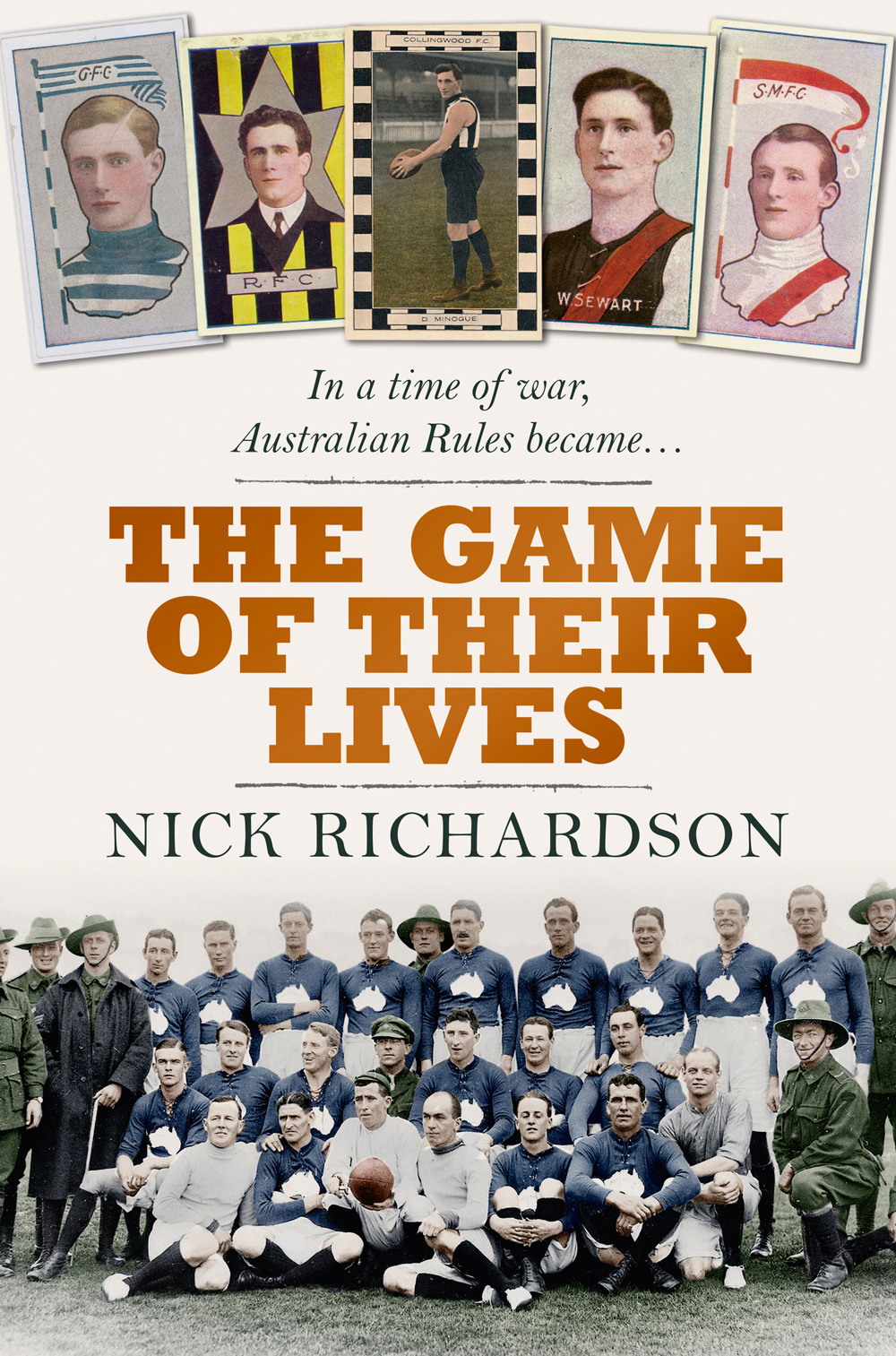 In October 1916, two teams of Australian soldiers played a special exhibition match of Australian Rules football in London – bringing the national game to the world beyond. Many of these players were sent to the Western Front, and some never returned. Here, Nick Richardson tells Sarah Trevor about the role of sport in World War I, and the stories he uncovered while researching his new book The Game of Their Lives.

IHM: What initially drew you to the story of the Pioneer Exhibition Game?
Nick: There were two things – one was my grandfather, who survived Gallipoli, and years later talked about the athletics competitions that were part of his training. I was always interested in finding more out about those events.

The second thing was seeing the very short film of the 1916 football match. I was struck by the sheer joy of the young men who were playing a game they loved. It was an irresistible demonstration of the power of sport at such a bleak time.

IHM: Who organised this match and why?
Nick: There were a number of people involved. A former Richmond footballer, Hughie James, hatched the idea while he was training with the 3rd Pioneers in England and from there, Sir John Monash directed the game should take place. He left Olympic swimmer and YMCA representative Frank Beaurepaire to make it happen.

IHM: Your book brings together sports and military history. What role would you say sport played in the war effort and on the home front during the Great War?
Nick: Sport was a vital – and underappreciated – element in 1914-18. While those who defended (professional) sport continuing during the war years did so in the belief that it provided an important relief from the sad and devastating news from the Front, sportsmen were put under enormous pressure to enlist, especially when so many Australian troops were lost. The fierceness of the debate about Australian football, in particular, indicated the depth of feeling around the issue.

IHM: What were some of the challenges involved in researching both the Pioneer Exhibition Game and the players themselves?
Nick: The biggest challenge was that so few of the direct relatives are alive. I was very lucky that the nephew of South Melbourne champion Bruce Sloss is still around and had Bruce’s letters home. The other problem was that although there was a program for the game containing the names of the players – and photographs of each team – it wasn’t possible to identify every player. The program turned out to be indicative only.

IHM: Which resources did you find most helpful in the course of your research?
Nick: There were a number of very helpful librarians from a range of institutions but by far the most rewarding research came from Trove, especially The Winner, a Melbourne sporting newspaper that was launched the month before the war started and closed six months before the war ended.

IHM: What resources did you come across when researching your bookthat perhaps haven’t been widely used by others?
Nick: Probably the most amazing resource was the footage of the game itself. Some people had seen it, but it had been mis-filed in the British Pathé archive for years as a game of “Australian rugby’’. We’ve been able to change the description of the film on Pathe’s database, so hopefully more football fans can find it easily. It’s a wonderful insight in to a different time.

IHM: The Game of Their Lives features a colourful cast of sportspeople. Who were some of your favourites to research and write about?
Nick: Asking me to pick is a bit like asking a parent to choose a favourite child. But it’s funny that perhaps the most engaging wasn’t a sports person at all – it was Bruce Sloss’s sister Tullie. She was a formidable character, who lived an extraordinary life as a governess to wealthy Americans. Importantly for this story, she was a compassionate diarist who was intimately engaged with her family’s sad story of loss.

Of the men, I was particularly taken with umpire George Barry, from Western Australia, who went from a criminal past to taking charge of the London match, and as a Collingwood supporter, the bluff and hearty Magpie captain Dan Minogue.

IHM: Did you come across any personal anecdotes that stopped you in your tracks, or touched you personally?
Nick: It would have to be the Scullin brothers, all footballers, from the West Australian goldfields. Their fate, and the lingering mystery over the death of Dan – the eldest and most talented footballer of the brothers – still moves me. No family should have had to deal with what confronted the Scullins but sadly, their story was not so rare.

IHM: What would be your top tips for researchers who want to know more about their sporting ancestors in the early 20th century?
Nick: I reckon the best tip is to mine specialised sporting newspapers – it’s not just The Winner, but the Referee (and Arrow) in Sydney, and then, from the 1920s, The Sporting Globe in Melbourne. There are plenty of names to work with, in every issue.