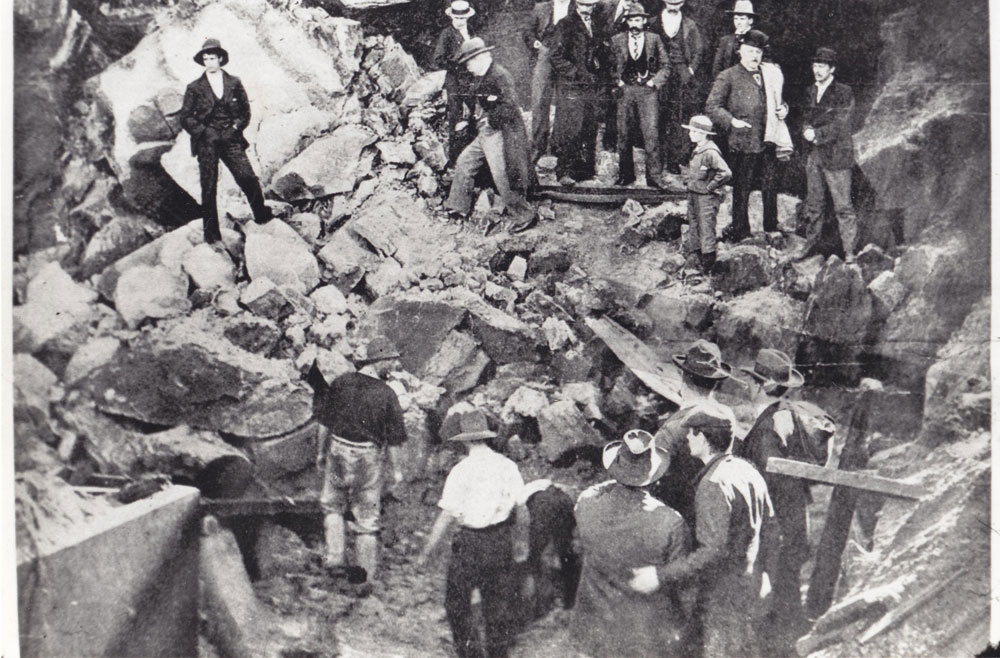 The Mount Kembla mine disaster – 114 years ago today – was a horrific explosion that claimed the lives of 96 men and boys. Here, Jamie Radford revisits this tragedy.

Although coal mining has contributed heavily to the Illawarra region for more than 100 years, it has also been the cause of two of the saddest days in the area’s history. The Bulli and Mt Kembla colliery disasters claimed 177 lives, and to this day remain two of the largest losses of Australian lives outside of war.

On March 23, 1887, an explosion in the Hill End section of the Old Bulli Colliery caused the death of 81 men and boys. The subsequent investigation found the explosion was caused by a build-up of methane being ignited by an uncovered lantern.

The investigating commission was scathing in its findings. It placed the blame firmly on mine management and the miners themselves, citing their lackadaisical approach to safety as the predominant cause of the explosion.

One of the men leading the investigation – F Danvers Power – said at the time:

“It is strange how some people will not use a little forethought, but insist on experiencing everything themselves, and how familiarity with danger breeds contempt, more especially in cases where serious consequences have not been experienced by the individual.”

It is unfortunate that Power’s words were not properly heeded by the mining industry as they certainly should have been, for just over 15 years later there would be another mine disaster in the Illawarra. It would eclipse the events at Bulli in terms of lost life, and would, to this day, remain the greatest loss of life in an industrial accident in Australia’s history.

On the morning on the July 31, 1902, coal miner George Adams kissed his recently wed young wife Jane goodbye, then set off up the road to the Mt Kembla Colliery. After an uneventful 30-minute walk, he arrived at the mine and descended into the shafts.

That same day, an arbitration hearing into mine safety was being held in Wollongong Courthouse. Mount Kembla Colliery representatives in attendance were adamant that their mine was safe, and that they were adhering to all safety measures laid out in the Coal Fields Regulation Act.

At 2pm that afternoon in Kembla Heights, retired coal miner William Stafford was out in his backyard tending to his garden. Harry Ramsey, a neighbouring farmer, was also outside. Half a mile further up the road at the Mt Kembla mine, Paddy Brownlee was inspecting the weigh cabin with Wilson, the mines’ weigh man.

At 2.03pm a massive explosion ripped through the No 1 shaft. The two men in the weigh cabin were knocked violently to the floor, as an immense fireball all but destroyed the building. They managed to escape the inferno, although both suffered severe burns.

William Stafford later said he had heard a huge report, following which he had seen a great tongue of flame at least 12 metres long, accompanied by pieces of iron and wood flying through the air.

Standing in sight of the old furnace at the time of the explosion, Harry Ramsey said he saw a snaky red flame, followed by a cloud of black smoke and dust shoot out of the No 1 old furnace shaft.

The explosion was so powerful, it was felt in Wollongong, some 11 kilometres away. The hearing into mine safety was quickly adjourned. A telephone call confirmed their worst fears and they, as well as many other townspeople, raced to the mine by any means of transport available to render assistance.

When they arrived at the mine, they were met with a scene of utter devastation and destruction. Virtually every building and structure had been laid to waste. What were once offices, engine rooms and boiler houses were now unrecognisable heaps of smouldering rubble. The main entrance to the mine was buried under tonnes of debris made up of earth, stone and iron.

While the explosion may have been felt as far as away as Wollongong, down in No 6 shaft the mines deputy day manager, David Evans, was unaware of the explosion. When told by wheelers’ overman Mat Frost that something was wrong in No 1 shaft, both men sped to the scene. Upon discovering smoke coming out of No 1, they made their way towards the air shaft, where they opened separation doors to send the smoke to the upcast shaft, preventing it from circulating around the mine.

The two men then made their way further into the mine, gathering together some 90 men along the way. Evans and Frost claimed to know of some old shafts no longer in use that could possibly lead them back to the surface. But after some discussion, only 70 men agreed to follow them.

Evans and Frost led the men even deeper into the mine. For what must have seemed an eternity to the trapped and no doubt terrified miners, they struggled through old, and to them unknown, shafts. They often had to resort to crawling as they encountered even older long-wall workings. Yet after almost three torturous hours, they emerged safely from the mine.

The 20 men who decided not to follow Evans and Frost, and instead make their own way to the surface, unfortunately perished in the mine, overcome by carbon monoxide fumes.

Meanwhile on the surface, former Keira Mine manager and ex-mayor of Wollongong, Major Henry MacCabe, was charged with co-ordinating the rescue effort. He also had to contend with the hundreds of volunteer rescuers who had converged on the mine. Fifteen years previously, MacCabe had played a vital part in the rescue efforts at the Bulli Mine disaster, and would do so again this day.

Sadly, though, he was one of only two men not at the mine at the time of the explosion to lose his life because of it. The other was nightshift deputy William McMurray, both men dying after being overpowered by toxic fumes.

After leading the 70 miners out of the shaft, David Evans immediately joined another rescue party and re-entered the mine, not coming out until past 2am the following morning. He went down again the next day to help recover the bodies of those who did not make it out. Frost also went back down the mine with another rescue party, and also joined Evans in the recovery effort the following day.

Mat Frost later told the inquiry into the disaster that Evans’ “actions and cool-headedness resulted in the survival of many men that day, and if not for him the death toll would have been far worse.”

In all, 95 men and boys died that day, including MacCabe and McMurray. Another man – Patrick Purcell – was in the engine house when it was completely destroyed by the explosion. Like Brownlee and Wilson in the weigh cabin, he escaped, although with severe burns. However, unlike the other two, he died after a painful two years in hospital. His death brought the total of lives lost in the explosion to 96.

George Adams, who bade farewell to his wife Jane earlier that morning, was one of the 70 men led out of the shaft by Evans and Frost, so was able to return home that night. However, the scars and memories of that horrific day stayed with him until his death.

Astonishingly – given the resources of the time – the only body not recovered from the mine that day was that of a young wheeler named Mickey Brennan. It is said that his father had a coffin made for his son, and that he searched the mine for two painstaking years trying to find Mickey’s body. Heartbroken at being unable to recover his beloved son’s remains, he walked into the ocean, taking his own life.

Folklore has it that up until the closure of the Mount Kembla Colliery, Brennan’s ghost wandered throughout the mine shafts making strange noises. Then in 1970 when the mine finally closed, he is said to have moved into the cellar of the nearby Mt Kembla Hotel.

In the days following the disaster, speculation arose that the explosion was caused by dangerous gas levels in the mine. This was quickly refuted by then MP for Wickham and Minister for Mines, John Fegan, and fellow MP for Shoalhaven, Mark Morton.

The mine manager, William Rogers, also stated categorically at the time that the mine was “absolutely without danger from gases”.

Then on August 7, he and a group of mine managers examined the mine, confirming his earlier statement, and concluding that the explosion was not gas-initiated, but instead the result of a “wind blast”.

They claimed this wind blast was created by a goaf fall, which subsequently raised a coal dust cloud that was ignited by the naked lights of the miners.

The claims of the mine managers that the explosion was not caused by a build-up of gas were dismissed at the inquiry following the disaster. Indeed, evidence emerged that not only had gas existed in potentially dangerous quantities, mine officials had been aware of the fact.

[For more information about how the mining company responded to this tragedy, read this article.]

As there were so many deaths the inquiry, headed by Coroner Charles Russell, centred upon only two of the deceased – William Meurant and William Nelson. The inquiry heard testimony from 28 witnesses, over 22 days, and at its completion found that:

“William Meurant and William Nelson died at Mount Kembla Colliery from carbon monoxide poisoning produced by an explosion of fire damp ignited by naked lights in use in the mine and accelerated by a series of coal dust explosions starting at a point in or about number one level back heading and extending in a westerly direction to the small Goaf marked 11 perches on the mine plan.”

Following this verdict, another inquiry was held into the competency of mine manager William Rogers. In September 1903, Justice Hayden announced: “After careful consideration, Rogers’ certificate would be suspended for a period of 12 months.”

The Mt Kembla Colliery was soon reopened, and in October of 1904 William Rogers was reinstated as manager of the mine.

The inquiry had also found the ventilation system of the mine was antiquated and inadequate. However, even after the loss of so many lives, it wasn’t until 1925 that mine management replaced the old ventilation system with a modern mechanical fan and, astonishingly, it was not until the 1940s that the use of naked lights in the mine was abandoned.

The Mount Kembla Colliery continued to produce coal until it was finally shut down in 1970. During its lifetime, the mine produced over 14 million tonnes of coal.