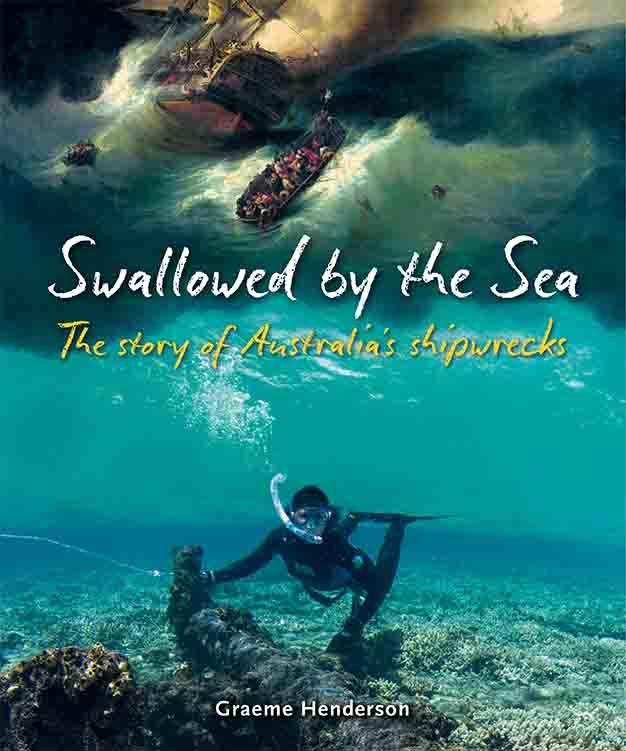 In his new book Swallowed by the Sea, leading maritime archaeologist Graeme Henderson delves into an array of shipwrecks around Australia’s coastline, from as far back as 1622 to as recent as 2010. Here, he shares his insights into researching and diving historic shipwrecks with Sarah Trevor – and recounts his thrilling first foray into maritime archaeology at just 16 years of age.

Just briefly, could you please tell us how you became involved in maritime archaeology?
It was pure chance. I had just turned 16, and my father took me, my brother and two of his friends out in his boat for a day of snorkel diving to spear fish. We slid into the water at a reef three miles offshore, 60 miles north of Perth. I saw ballast bricks on the seabed, and thinking they might be from a wrecked crayfishing boat, I tucked one inside my wetsuit. About to swim on and catch up with the others, I noticed dozens of curved objects projecting from the reef. I called the others back. We wrested one free and immediately recognised it as an elephant tusk. We had found the legendary wreck of the Dutch East India Company ship Vergulde Draeck (Gilt Dragon), lost on its way to the Spice Islands in 1656 with a cargo of bullion.

The rest of my life was determined at that moment. My father was a journalist, so the story appeared in the Daily News the next day. I wrote about my discovery in my school magazine, and won the state’s Historical Society essay prize. Completing high school I did a history degree at university.

Meanwhile, divers from around Australia were visiting the wreck to collect pieces-of-eight as souvenirs. Some were using gelignite to loosen clumps of coins. I was devastated to see the wanton destruction, and my father arranged a deed of assignment whereby our rights as finders were transferred to the Western Australian Museum.

Of all the shipwrecks in Australian waters, how did you go about choosing which to include in Swallowed by the Sea?
I wanted evocative stories, and the widest date range, geographical spread and vessel type. The stories I selected included themes of navigational incompetence, mutiny and piracy, the search for undiscovered wrecks, heroism in the face of disaster, castaway life, the roles played by women, dangerous reefs, poorly designed and maintained ships, and victims of warfare.

I chose the earliest shipwreck, the 1622 Tryal, and a very recent one, the 2010 asylum boat SIEV 211. The wreck locations include the north, south, east and west coastlines of Australia, out to sea as far as Christmas Island and Norfolk Island, and as close to suburbia as The Gap at Sydney.

You’ve personally located and dived many of the shipwrecks featured in the book. What are some of the insights that you can only gain into a historical shipwreck by diving it?
To gain a broad understanding of each historical shipwreck I utilised the approaches of both the historian (looking at the documentary evidence), and the archaeologist (looking at the physical evidence). Many elements of a shipwreck cannot be revealed without diving in at the deep end.

Many of the shipwrecks in shallow water are only discovered by accident: the records of location having been lost, or not recorded in the first place. Establishing the identity of a wreck then depends on matching what I have observed on the seabed, such as the wreck’s location, size, construction materials, indications of cargo – with the historical record in newspapers indicating the circumstances of the wreck, and Lloyd’s Register of Ships to compare the intended route, cargo and construction specifications with my recorded seabed observations and measurements.

Dates on coins, marks on cannon, ceramics of a datable style, construction features consistent with a particular nation’s shipbuilding, cargo items known to have been on a particular ship; these and many more seabed insights are necessary to develop the picture.

Of all the shipwrecks you’ve explored, which touched or moved you most personally?
HMS Sirius, the unofficial flagship to the First Fleet, was a vessel of great importance to the fledgling first European settlement in Australia. The wreck event at Norfolk Island in March 1790 cast a pall over the colony’s future. An officer in Sydney wrote:

You never saw such dismay as news of the wreck occasioned among us all; for, to use a sea term, we looked upon her as our sheet anchor [the largest anchor, used only in emergencies]… The country, my Lord, is past all dispute a wretched one, a very wretched, and totally incapable of yielding to Great Britain a return for colonising it … There is no likelihood that the colony will be able to support itself in grain or animal food for many years to come, so that a regular annual expense is entailed on the mother country as long as it shall be kept.

The accounts of the survivors filled me with sadness, but what a contrast it was when we located the remains of the hull, in shallow water, directly beneath the surf zone. It was pure exhilaration, clinging to the reef, board riders skimming past above, and coming to the realisation that the concreted black mound before me was made up of the Sirius’ rectangular ballast pigs, still chained together in what had been the bottom of the ship. That really moved me.

What were some of the challenges involved in researching shipwrecks for this book?
When I started the research, I was already prepared with many years of fieldwork experience, having been a member of the teams working on the Tryal, Batavia and Vergulde Draeck, and running excavation seasons on the wrecks of HMS Sirius and HMS Pandora. More recently, engaging with the not-for-profit Wreck Check Inc. in the search for Dutch shipwrecks on Christmas Island and the Cocos Islands, there were the challenges of arranging sponsorship and collaboration interested organisations and individuals, and getting bulky search equipment to the islands.

Using online information resources such as the National Library’s magnificent Trove, the biggest challenge, given that the data is infinite and largely unregulated, is to sort the sheep from the goats – the tuna from the jellyfish. This involves establishing the veracity of the reported data before using it in the narrative.

Which resources did you find most helpful in the course of your research?
First-hand accounts such as diaries, journals and letters are hard to beat, but not always available. Not many years ago many of the resources necessary for researching shipwrecks were only to be found in libraries overseas or interstate. Now, sources such as the Gutenberg Project, which features ‘treasure found hidden with no evidence of ownership’, and offers over 55,000 free e-books, are invaluable. Overseas contacts with a good knowledge of foreign language archival sources are another godsend, and they must be cultivated.

If you could track down one thing you haven’t yet managed to find out, what would it be?
When researching shipwrecks the journey is as interesting and important as the destination. Tracking down the answer to one question leads to many more tantalising questions. Where is the wreck of the Dutch East India Company ship Fortuyn, lost in 1726 while en route from Cape Town to Batavia? That is a ship that I haven’t yet managed to track down. The records suggest that it was wrecked on the southwest side of Christmas Island.

With my mates in the not-for-profit group Wreck Check, I have done a magnetometer search down to 30 metres without finding it. However, the underwater profile of Christmas Island is very steep, so steep indeed that local divers photographed a wreck one weekend, and the next weekend it had slid down into the dark abyss. If that is what has happened to the Fortuyn, will such technology as an autonomous underwater vehicle facilitate its discovery, or is an airborne magnetometer search the only option?

What would your advice be for readers who want to learn more about a particular shipwreck?
Check with the nearest maritime museum for information they might have, and if you are prepared to get wet, enquire about whether your state has a maritime archaeology association.

The internet is the convenient first base for most people now. The National Library’s search engine, Trove, brings together content from libraries, museums, archives, repositories and other research and collecting organisations big and small. A wealth of important sources, particularly newspapers, that once were only available as hard copy are now online.

The Lloyd’s Shipping, and Bureau Veritas, registers give detailed vessel specifications and some information about ownership, routes taken and cargoes. It is important not to omit visiting the local/state library, and archives of government and private records. Genealogy search engines such as Ancestry can provide valuable clues.