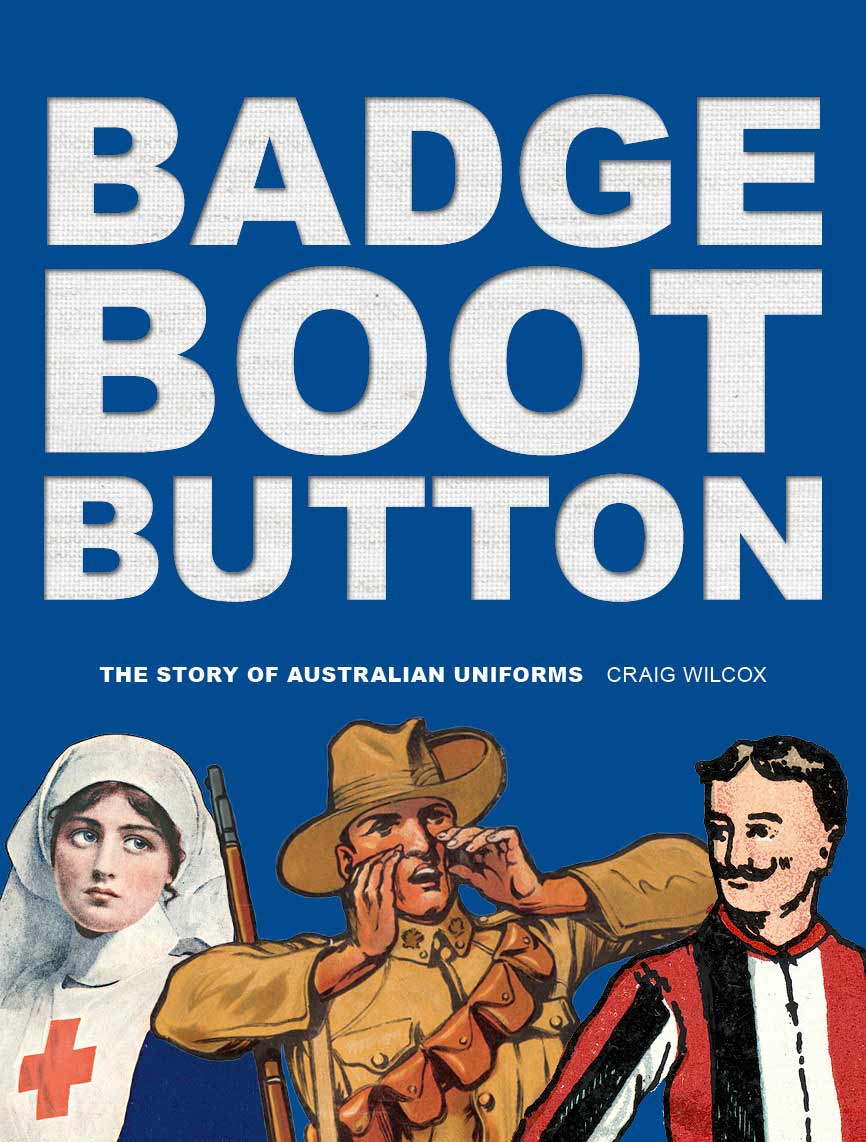 What do athletes, the armed forces, (some) convicts, police, cabin crew, referees, nurses and lifesavers have in common? Uniforms. They’re not just items of clothing, argues historian Craig Wilcox — author of new book Badge, Boot, Button: The Story of Australian Uniforms — but also a barometer of social change.

If you’ve ever wondered about how much Australia has changed over time, look no further than the evolution of our uniforms.

Consider what women flight attendants with Qantas have worn over some of the last 40 years. Emilio Pucci’s green tunic and floral-print dress of 1974 had a conservative femininity and European sensibility perfectly suited, if you’ll forgive the pun, to the mid-seventies. The quieter blue and red with gold buttons that followed in 1987 showed women were gaining authority, and that authority might be needed now the good times seemed over. The uniform became darker still in 1994 as executives kitted themselves out in power suits and Australia emerged from Paul Keating’s Recession We Had To Have. Then came Peter Morrisey’s boomerang print dress, marking a national embrace of Indigenous culture.

Okay, so that’s not exactly a rigorous measurement of social change. Well, what about measuring the decline of traditional or European Christianity by the near extinction of clergymen’s dog collars? Or the rise of corporate power by the spread of brand names and logos across the bodies of professional sportsmen and women?

In 1975, Manly-Warringah rugby league first graders were wearing plain maroon and white jerseys with a prominent eagle, the club’s symbol, appropriately over their heart. Next year, the name of the electronics company Pioneer appeared mid-chest. In 1977, Pioneer’s logo rose to the left breast, rivalling the eagle which a year later was safely caged within a small coloured circle. In 1983, spectators’ eyes were drawn to the name of Wormald; in 1990 to P&O. By the mid-1990s, a large, brightly coloured Pepsi logo occupied the middle of Manly jerseys, and an emblem for Fuji Film appeared on both shoulders. By 2001, a Manly player was a moving billboard for Telstra, Nike, Fuji, and an internet service provider.

So far, so predictable. The origin of some uniform icons is more surprising. The slouch hat, for example, is anything but home-grown. It migrated here in the 1880s at the invitation of British colonels, not Australian ones, and at first it was widely disliked as sloppy and foreign-looking.

Then there are the uniforms Australians haven’t worn. No spiked helmets, like some South American armies copied from Germany; no red bloomers, fez and other features of the Zouave uniform widely copied in the United States from France. The rejection of one of these as too militaristic and the other as too weird were signals about national values — civilian at heart, and a little suburban too.

If uniforms show how we’ve changed, have they also changed us? Not a lot — we’re not that kind of society, or not yet. But uniforms have encouraged social change as well expressed it.

The tunic, peaked cap, knee-length skirt and sensible shoes worn by thousands of women in the armed services during the Second World War gave confidence and a degree of authority for the first time to highly visible representatives of half the population. The overalls also issued to many of these women, like the gym tunics they’d worn at the school and the tracksuit-like school uniforms some of their young grandchildren would wear, offered freedom of movement that confounded traditional expectations of behaviour.

The old brass-buttoned blue suits and leather shoes once worn by police, firefighters, railway staff and ambulance crews expressed and encouraged a restrained kind of authority. Okay, that authority was blokey and a little rough around the edges, but its pretensions were as limited as shoe leather in a foot chase, or fire helmets in a music-hall joke. How different are the new dark police and Border Force uniforms, clearly designed to intimidate us.

I could go on about how useful uniforms are for getting a grip on Australia’s past, but some wise words from the American humorist P. J. O’Rourke hold me back. Uniforms, he once wrote, ‘belong to the category of interesting things that become less interesting the more somebody goes on about them.’

Badge, Boot, Button: The Story of Australian Uniforms by Craig Wilcox (NLA Publishing, $44.99) is now available where all good books are sold and online