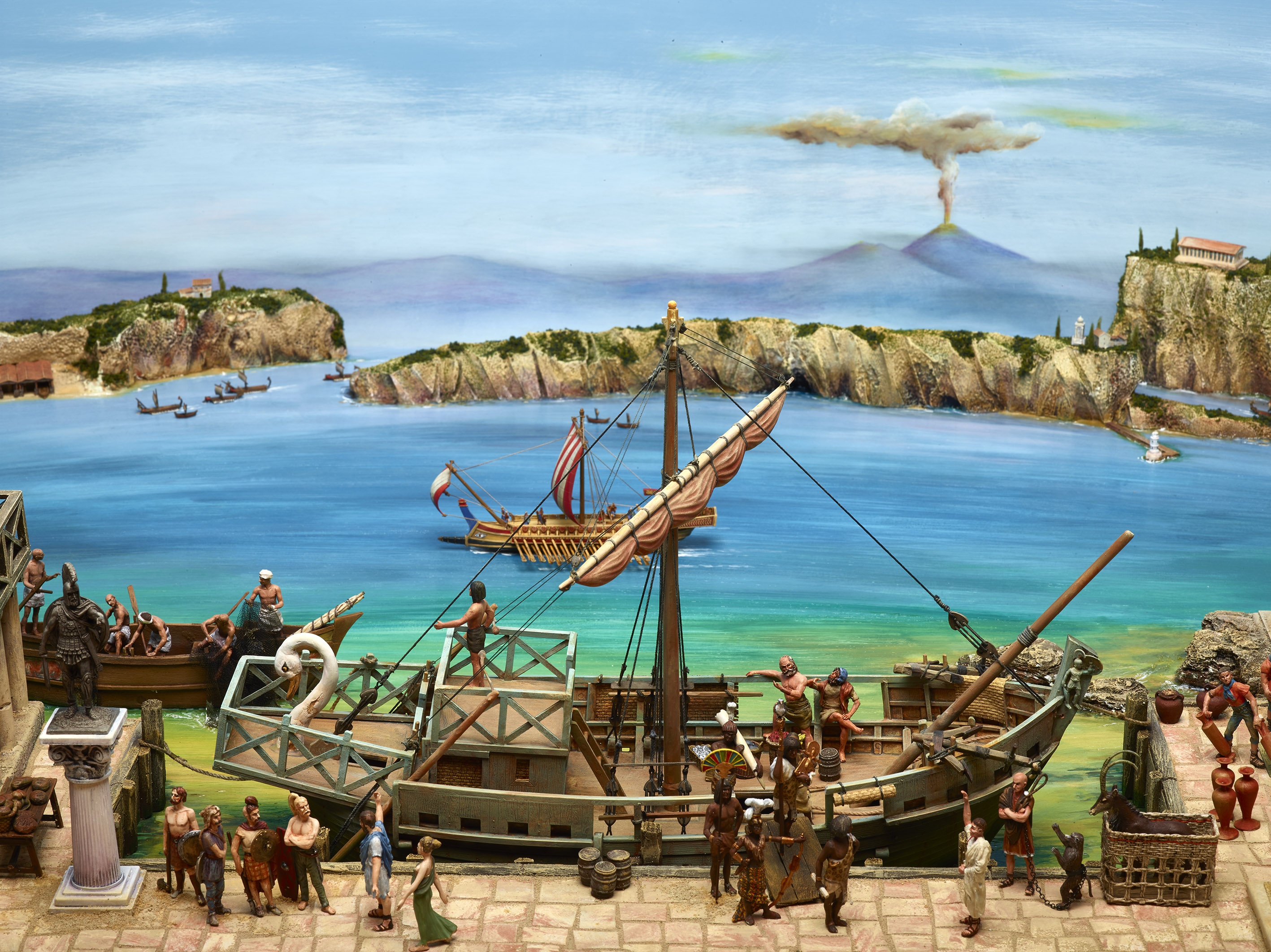 Home > Blog > Featured > Escape from Pompeii :: Brought to life in an intricate diorama at the ANMM

Neither Rome nor the diorama of Port Misenum were built in a day. Documentary maker and now museum volunteer, Geoff Barnes, talks about model-making for a large museum. Photography by Andrew Frolows (ANMM) and Roger Scott.

On 31 March 2017 the Australian National Maritime Museum launched a blockbuster exhibition about Pompeii. Mount Vesuvius on the west coast of Italy erupted in AD 79, spewing out huge waves of volcanic ash and debris that destroyed the prosperous trading port of Pompeii and other nearby towns. The Roman Navy attempted to evacuate victims by sea marking one of the first recorded civilian rescue missions in history. Telling the story of Rome’s Navy, its role in the Roman world, and its climactic rescue attempt at Pompeii, the exhibition showcases over 100 museum treasures from Italy including gold jewellery, ceramics, sculptures, frescoes, artefacts recovered from ancient shipwrecks and features haunting body casts of some of Vesuvius’ victims.

When Geoff is not being commissioned to build dioramas, he volunteers at the Maritime Museum, doing tours on the warships, submarines and square-rigged sailing ships. “All very bloke-y stuff,” Geoff explains. “So I became a bit jaded with my volunteer colleagues asking how my toy soldiers were progressing. My well-rehearsed response went along these lines:

‘In diorama building here are a multiplicity of peculiar skills and arcane interests required – imagination, delight in story-telling, accurate research, informed speculation, infinite patience, high level of obsession with detail, carpentry, sculpting in various modelling compounds, architectural modelling in card, landscaping in plaster, perspective (forced and/or receding), painting in acrylics, watercolour and pastels, utilising anything that can reduce the amount of scratch-building, an intimate knowledge of what is on the shelves of art and craft shops and at the end of the day, a feeling for what just-feels-right.’

So when he received an email from the ANMM in September 2016 asking if he would build a diorama for Pompeii, Geoff naturally said yes. Here he explains the process of initial concept to finished masterpiece.

“I discussed the approach with the ANMM planning team. The options were for a walk-around table-top or a diorama in a box, with receding perspective, viewed from the front. Given time constraints, we decided on the latter. I explained to the museum that a boxed diorama is very different to the precision work of their ship modellers. It is intended to create a feeling for the time rather than present a meticulously scaled miniature of a vessel. It uses tricks of light and shade both painted and illuminated, and limits visual access in much the same way as a proscenium arch limits what you can see on a stage. It creates an emotional reaction as well as an intellectual response.

They agreed. Now would I please get on with it?”

Not a solo mission

“I was not going to achieve this on my own. Fortunately I have a good friend who also understands the world of dioramas. Roger Scott and I had worked on various dioramas. One of our customers was Russell Crowe. For him we did the battlefield of Beersheba, where the Australia’s 4th Light Horse Brigade staged one of the world’s last great cavalry charges in 1917. Crowe had become interested in the ANZAC legend when he made his film The Water Diviner, about the aftermath of the Gallipoli campaign. He had used King and Country figures on a sand table to storyboard his battle sequences and now wanted a more permanent setting for them. Ostensibly it was for his son as a Christmas present, but Roger and I did notice over lunch up at his farm that he still protested to his mother, also present, that she has disposed of his boyhood collection without telling him. She responded that he had left home to become an actor. Incidentally, later in the afternoon I did get a practice swing with Maximus’s sword and examine Jack Aubrey’s salt-stained uniform in detail.

“Roger and I met with the ANMM head of the project, the curator for content, the designer, and the education officer. I sketched out an idea for our diorama’s moment in time.

“In 79 AD Mount when Vesuvius was first erupting, the admiral of the fleet, Pliny the Elder, was at home in Misenum, digesting his lunch. Misenum was fleet base to Rome’s formidable Mediterranean flotilla, but peaceful enough that afternoon. The fleet had not seen much action for some years, since Pompey destroyed the pirates.

“Pliny the Elder was not really a navy man; more a public servant. He was an overweight civilian bureaucrat who managed a valuable Imperial resource on behalf of the Empire. His position was important, even if the navy never had the social cache of the land-based legions. He was also was a keen observer of natural phenomena and prolific author about them. His widowed sister, with whom he lived, had pointed out the towering ash cloud rising up from the volcano, shaped rather like a huge umbrella pine tree. Pliny was intrigued, even though most of the people in Misenum ignored it, getting on with their daily lives. For them, volcanic activity at Vesuvius down the coast was a regular event, and nothing to worry about.

“Pliny decided to sail down and see for himself at closer quarters. He ordered up his personal bireme, a sleek liburnian modelled on the excellent vessels previously used by the pirates. I suspect that it was curiosity and the prospect of another bestseller about strange natural events that motivated him rather than any immediate concern. But events were about to move very quickly and tragically.

“So, what would be our moment in time for the Misenum diorama? Just prior to the major eruption, I decided. At this precise moment we know – but they don’t – how catastrophic this event will be for Pompeii and Herculaneum. Pliny calls for his transport but elsewhere life is still going on in Misenum, and our diorama.

“We drew up a plan and schedule. I did a lot of internet and library research to augment that of the curator for this exhibition, Will Mather, and as supplied by Contemporanae Progetti . We sketched out a floor plan on big sheets of layout paper showing placement of the layers of diminishing perspective; a foreground dockside area in 1/35 scale and the distant shoreline of cliffs is 1/1200 scale, masking the transition to a curved two-dimensional background.

“The committee approved, and we started work in two locations; Roger’s underground ‘dungeon’ space, and my second bedroom, now dedicated to diorama building. At first, we divided up the tasks so that we could work independently, but once the base and buildings were complete, we spent most of the time in the large sandstone vaults under Roger’s home, welcomingly cool in the height of Sydney’s summer.

“I had delusions of building the ships from museum-quality wooden kits and went as far as purchasing two of them, having never built one previously. The boxes proved to be choked with a complexity of laser-cut timbers, myriad balls of graded cord, and novella sized instructional manuals. I retreated to plastic kits, which I understand. A trading ship was to be the centre-piece, but as none was available I converted a Zvezda kit of an 11th century warship. It took overlong to do but I was pleased with the salt-weathered result.

“My wife Penny admired our enthusiasm but suggested that a cardboard mock-up was a very good idea before we made too many errors in dimensions. Sound thinking. We were able to check sightlines accurately before construction.

“Pompeii and Herculaneum survived but Misenum, because it was not buried, had suffered two millennia of occupiers who have trashed it, pillaged it for convenient building materials, and let the odd earth tremor finish the job. There is very little trace of it today. This was to our benefit, as we could use our informed imagination rather than being tied to precise archaeological-authenticated plans.

“We were concerned to be as factual as possible. Frequent checking on the internet took place. Questions were as varied as ‘Did the Romans use barrels?’ and ‘What sort of serpents would an Egyptian snake-charmer have?’ And bless Google Images which rarely failed to deliver.

“The base was a robust sandwich of MDF boards and thick refrigeration insulating foam. The buildings, dockside and distant shoreline were cut or hot-wire sculpted from foam, or foam-core boards. Quality cardboard was used extensively, provided gratis from a friendly picture framer’s off-cut bin. There were multiple trips to the local Bunnings and to the art and craft shops in Sydney.

“As I lay on the floor of a haberdasher shop looking at the lowest row of button patterns, trying to find some with lion’s heads for the bronze temple doors, a nice young shop assistant came over and politely asked if I needed an ambulance. My explanation seemed to perplex her.

“The diorama was delivered to the ANMM museum in late December. It was duly locked up in a dust-free security area in the loft of the Museum’s vast store-rooms. I came back in early January and did the final cleanup and adjustments.

“However, the key element was still missing – the towering cloud of Vesuvius in the distance. This entailed painting a backdrop of Naples Bay approx three and a half meters by half a meter, the largest painting that I had ever attempted. On completion, it looked a bit like a mural from a 1960s pizza shop, but we duly toned it down until it was misty enough.

Geoff explains what visitors see in the diorama.

“On the terrace of aging harbour-side mansion, Pliny the Elder consults maps of the coastline with a senior naval officer and two senators , recalled reluctantly to duty from their nearby holiday villas. His sister, the plump widow Plinia, as well-nourished as her overweight brother, has drawn his attention to the curious volcanic cloud that has formed over Vesuvius. Pliny is intrigued and decides to order up his personal ship to investigate. As yet, he has not received the plea for help from Pompeii. Pliny the Younger, adopted by his uncle, and whose letters will later tell of these momentous days and help make his reputation, declines to accompany him. Perhaps his mother’s maid is the immediate focus of his attention.”

Meanwhile, down in the square, life in Misenum goes on with little attention being paid to smoking Vesuvius further down the Campania coastline.

At the temple of Augustus Fortunae, a well-dressed widow consults a priest about a sacrifice in memory of her late husband. Being of flamines rank, the priest is entitled to a lictor escort. They try to ignore the Egyptian snake charmer and de-frocked eunuch harpist on the steps. Temples and market places were magnets for buskers and beggars.

Some hard-working marines in their distinctive blue scarves are storing amphorae of cheap wine and jars of garum in the navy’s warehouse adjacent to the temple. A bored officer supervises. Amphorae had been the standard way of transporting valuable liquids since the Bronze Age but, while reliable, they were heavy ceramic. The Roman army noted that the Gauls used barrels, and quickly adopted the idea. Behind the Naval warehouse, a large statue of Poseidon calms the seas. Such statues were seen at most Roman ports.

In the square there are several stalls doing a brisk trade, with slaves and citizens bargaining and arguing, and heading off home with their purchases. There is a bronze ware stall. A fruit and vegetable stall shows the fine range of produce from this very fertile coast of Campania.

6. The diorama in its entirety

Geoff Barnes and Roger Scott’s diorama is on view as part of the Escape from Pompeii exhibition, showing at the Australian National Maritime Museum until 30 August 2017. Geoff and Roger do build dioramas to order. To contact them, email geoffandpenny.barnes[at]bigpond.com  or christina.scott123[at]hotmail.com