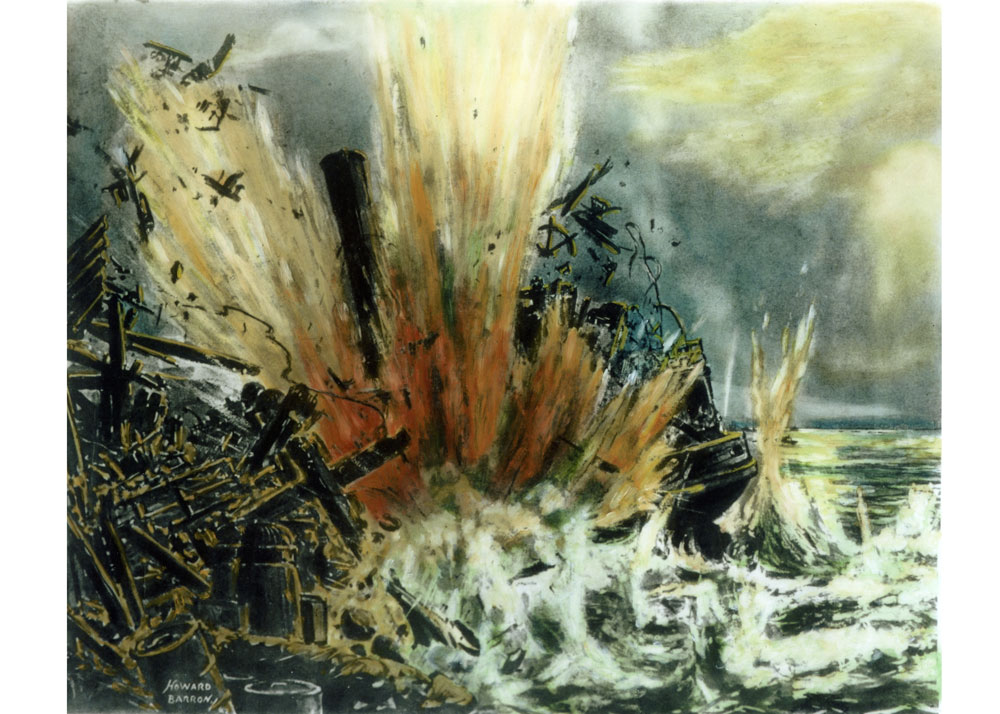 Home > Blog > Featured > Neither Hero Nor Victim: A survivor of the Kuttabul attack in Sydney Harbour, 1942

Today marks the 75th anniversary of the night the war came to Sydney. On 31 May 1942, Japanese midget submarines entered Sydney Harbour and attacked, killing 21 soldiers on the HMAS Kuttabul. Here, Gary Traynor from Medals Gone Missing tells the story of two Australian sailors who had a close shave with a torpedo that fatal night.

Australian War Memorial records contain numerous accounts of ‘narrow escapes’ and ‘close calls’ experienced by Australians over the past 100 years. Whilst many servicemen simply put their survival down to ‘fate’, it was not uncommon for some to place their faith in good luck charms for protection. A number of photos within the Memorial’s collection support this.

However, at 93 years of age, Royal Australian Navy veteran Harold Reader has never questioned his luck. This is despite the fact he narrowly escaped serious injury or death not once, but twice in the narrow space of half an hour — the night that war came to Sydney. Whether it was fate, providence or divine intervention, his unwitting tale of survival is a remarkable one.

The story of the Japanese Type ‘A’ midget submarine attack upon Sydney Harbour during 1942 is well documented. And when the wreck of Ha-24 was finally located off Bungan Head near Newport in 2006, the mystery behind the third midget submarine — which had been missing for over 60 years — was solved. This raider, crewed by Ban Katsuhisa and Ashibe Mamoru, was the only midget submarine to successfully fire its two torpedos. Their target was the American heavy cruiser USS Chicago moored off Garden Island, in a harbour which was complacently considered a safe haven.

The Kuttabul attack
Amongst the sailors billeted aboard the depot ship at Garden Island was 21-year-old Harold Reader. Having recently completed his initial training at Flinders, Harold was drafted to HMAS Kuttabul to await a further draft to join a naval ship with vacancies for ordinary seamen. “In transit, but not to any specific place,” he recalls many years later.

Like numerous other men living aboard the converted ferry, he had simply been filling in time since February, being ‘terribly bored’. The vessel could sleep approximately 150 personnel but had messing arrangements for up to 250 men. It would prove fortunate that an attack would be launched on a Sunday evening when many personnel were ashore on leave.

The stoker’s mess on any vessel was usually below decks, close to the engine room. Of the 21 sailors who would lose their life that night, many were stokers billeted in the bowels of the ferry. Harold states he always slung his hammock on the upper deck, towards one end.

A three watch system was instigated for personnel aboard Kuttabul, each of four hours’ duration. The evening watch commencing at 20:00 hours. On the night of 31 May/1 June, Harold Reader and another sailor named Horace Beazley had been allocated the middle watch from midnight through to 04.00 the following morning.

“You had to fill the time in doing something,” Harold lamented. “Four hours with nothing to do, it went on and on and on.”

However the evening leading up to their watch was far from quiet. “Some time before midnight — about 10 o’clock, I think — there was a lot going on in the harbour,” Harold recalls. “It was lit up, there were shells being fired, searchlights going and then it seemed to die down after a while.”

With absolutely no doubt that Sydney was under attack, Rear Admiral Gerard Muirhead-Gould sounded a general alarm at 10.27pm. But not everybody was made aware that Japanese raiders had penetrated the harbour defences. Least of all Harold and his fellow guards.

Harold’s designated post that night was a land based wharf on the north-west side of Garden Island. From this vantage point, he could look out to Mrs Macquarie’s chair. Though only a short distance from where HMAS Kuttabul was moored, buildings obscured the ship from view. Harold was a conscientious sailor, arriving 10 minutes before the commencement of his shift, which would prove to be his first escape.

“After midnight I wandered around on my particular wharf. I just wandered up and down and looked out on the water. There was just darkness. You couldn’t see anything — although you could see the silhouette of the USS Chicago of course. It was fairly close.”

As rifles were in short supply, his only weapon with which to defend Garden Island was a bayonet.

Seaman Reader recalls: “Not very far across a little way was another wharf and I talked to the fellow on that. I knew him well, it was Horace Beasley. He was on what they called the Gun Wharf.” This small alcove hemmed in by the landward jetty and the Gun Wharf was a docking point for many small motorboats.

Approximately 30 minutes after they had left Kuttabul to commence their watch, the midget submarine commanded by Ban Katsuhisa fired its first torpedo in an attempt to sink USS Chicago. This attacked missed the intended target and struck the sea wall below Kuttabul, causing the death of 21 allied sailors. Harold recalls:

“Well, around about 12.20am, there was a large explosion. We still didn’t know what it was … it was down the island a bit from me. Well, we just talked and stayed where we were.”

The detonation was enough to break Kuttabul into two pieces. With an explosive warhead of 772 pounds (350 kg), the blast from the powerful explosion lifted the 447-gross-tonne ferry high on the water, as if on an enormous wave.

However, Type ‘A’ midget submarines carried two torpedos and nobody was aware that Ban had actually fired his second charge. The diligent sailors remained at their stations and awaited further orders. “Things settled down,” Harold went on to say. “At 4am, when we were supposed to be relieved, we weren’t relieved.”

A close shave
No doubt, the activity and excitement of the evening was a topic for discussion, so the pair chatted to fill in time. “The distance between us was close,” Harold relates. “We could talk across the water. It might have been about 30 feet.”

The two sailors were blissfully unaware that Ban’s second torpedo had actually ran aground and failed to explode directly between them.

It was not until sunrise that Harold Reader and his companion discovered just how close they had come to certain death for a second time. A casual glance into the water revealed a long metal object protruding onto the shore and Harold’s first thought was ‘What the hell’s this?’

Despite their short time in the navy, both men had full realisation the object was a torpedo. “It would have been a bit closer to Horace’s wharf than my wharf,” recalls Seaman Reader. “The tide was receding which caused it to come into view.”

Possibly due to the angle of the rocky shoreline, the torpedo was deflected upwards and failed to explode. However the impact was sufficient to rupture the warhead which emitted explosive in the form of picric acid, a yellow substance. As Harold recalls:

“If it had gone off, we would not have been here. It was the same size torpedo which blew the Kuttabul in half. It was five metres away, that’s about all.”

Seaman Reader believes the high tide must have muffled the sound of the torpedo impacting upon the shore.

“When it got really light we all wandered back to where the Kuttabul used to be. It was lying in the water. There were people walking around.”

Seaman Reader saw one body in the water. “That was all. I think they had pulled them all out that they could get by then. I suppose I felt glad I hadn’t been on it. Only one fellow I knew lost his life, Ray Venning, who we called Bluey. Three men who I knew were rescued. They were Neil Roberts, Eric Davies and ‘Bomber’ Brown. All were in my New Entry Class when we assembled at HMAS Cerberes at Crib Point out of Melbourne in November 1941.”

“We then just got on with life. There was no counselling in those days.”

The torpedo which destroyed HMAS Kuttabul was a Type 97 torpedo, serial number 77. The tail section was recovered by navy clearance divers in 1942 and, whilst severely damaged, it remained relatively intact after the explosion. The relic was donated to the Australian War Memorial in 1948 by the Royal Australian Navy Torpedo Establishment.

In writing about this amazing find, then Assistant Director Major Harold Ward stated: “I regard it of outstanding value as a relic, although nobody here seems to have much regard for it.” He was no doubt reflecting the attitude of a war-weary nation.

“The mechanism in it is still clearly discernible and the two after propellers are entirely intact, and the odds about recovering a historical torpedo such as this one are, I should say, about a million to one” Major Ward continued.

He summed up his report by stating: “the chances of recovering an exploded torpedo, even in a shattered state, from the sea bed are almost ‘write your own ticket’ odds.”

The Australian War Memorial collection has three of six Japanese torpedos used in the Sydney attack. Interestingly one torpedo bears the consecutive serial number of 78. Recovered from submarine Ha-21 (also referred to as M22), this torpedo bears a series of indentations near the tail section as a result of its failed launch.

Harold Reader and Horace Beazley were unwitting participants in an audacious attack by a determined enemy. Typical of his era, Harold Reader is a humble man and shies away from the limelight, stating, “I still regard myself as neither hero, nor victim of that tragedy.”

Despite serving until 1946, Harold says he had no further close shaves as far as he knew while in the navy. However there is little doubt that both he and Horace Beazley came close to death not once, but twice, the night that Sydney was shaken to its core.