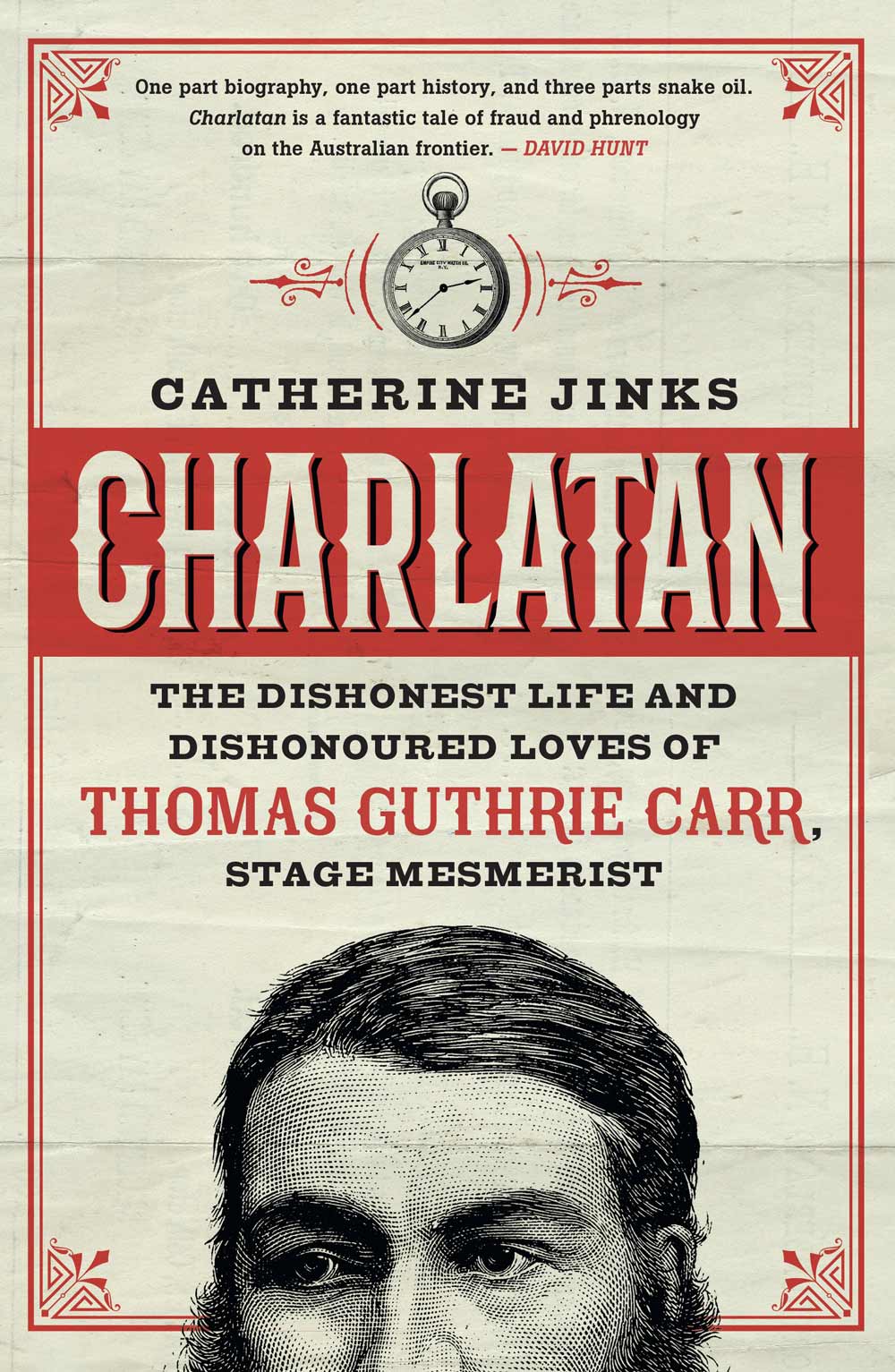 Thomas Guthrie Carr was a stage mesmerist who lied, fought and sleazed his way around Australia and New Zealand between 1865 and 1886. But was he a sham? In this extract from her new book Charlatan, Catherine Jinks looks at the notorious reputation of the mysterious Thomas Guthrie Carr.

The book was entitled Life: How to Enjoy it and How to Prolong it. A photograph on the first page showed a round-headed man with a luxuriant moustache and a very slight cast in one eye. This was supposed to be a portrait of Professor F. C. Fowler, aged forty-one, ‘taken many years ago’.

At the time of publication, Fowler was just thirty-seven years old.

A large portion of his work was devoted to the evils of masturbation, which, he wrote, would turn young men into eunuchs. But Fowler also castigated the plague of swindlers who were flooding the country with pamphlets and circulars ‘prompted by a benevolent desire to warn young men of the terrible consequences of self abuse etc and get their money’. Fowler’s stated purpose in writing his manual was to protect the public from such unprincipled quacks. Measured by its contents, he added, the book was cheap at five dollars. And Fowler himself could always be consulted (in perfect confidence) by anyone suffering from those complaints that ‘gnaw and prey upon the mind, body etc., of the person so afflicted’.

His book covered a lot of ground, from Manhood to Psychology. Fowler even explored the subject of animal magnetism. All well-sexed men and women, he said, were possessed of great magnetic power – which would diminish with any loss of sexual power. As an example he cited the case of Walter Montgomery, the actor, who lost his ability to control others when deprived of his mojo, and subsequently shot himself.

Dr. Carr, who recently died, as it is supposed, from an overdose of morphia at Glen Innes, Australia, was an example of a man with tremendous sexual power. Few men or women could withstand his magnetic influence; but as his sexual power failed he lost his power as a mesmerist …

By the time this was written, Carr had been dead for nearly ten years. Yet his name had surfaced, half a world away, in an obscure tract by a self-proclaimed ‘physiognomist’ who had never set foot outside the United States. Clearly, Carr possessed a singular reputation. Twenty years earlier, a New Zealand clergyman had brought a libel action against a journalist named Richard Sherrin, largely because Sherrin had likened him to Thomas Guthrie Carr. In a letter to the Waitangi Tribune, Sherrin had accused both men of being birds of prey. He had described Carr as a charlatan, and had made reference to the mesmerist’s unfortunate sexual history. Dismissing with ponderous sarcasm the notion that Carr might be a womaniser, Sherrin had protested, ‘Woman is his divinity and to her shrine he constantly does homage … he cares not for these things.’

It could be argued that Carr’s bad name stemmed from a single court case that had occurred way back in 1868. But close study betrays hints of a fairly tumultuous romantic life. As for his occupation, that can’t have helped matters. Mesmerists had been regarded with suspicion ever since Franz Mesmer had published his findings on ‘animal magnetism’ towards the end of the eighteenth century. Mesmer was supposed to have unlocked the secret of a magnetic power that allowed him to cure or even stupefy his patients. He’d said he could do this by passing his hands over a patient’s body, manipulating its magnetic field in a way that would make his subject insensible to pain. From the very first, however, his new ‘science’ had become the focus of enormous controversy. Some people had tried to prove that it was fraudulent, some that it was dangerous. Many of the operators who practised it were out-and-out charlatans, as were their subjects; the whole pursuit soon acquired a seedy, permissive aura.

So it’s not surprising that mesmerism should have found a niche in frontier colonies like Australia and New Zealand. Between 1851 and 1871, the Gold Rush caused Australia’s population to triple – and among the many rebellious, unprincipled, shiftless, inadequate and frankly disturbed immigrants attracted by the ‘wild west’ air of the place was a host of struggling entertainers: actors, singers, acrobats, magicians, spirit mediums, preachers, impersonators. Thomas Guthrie Carr was just one of many stage mesmerists who invaded the antipodes during Queen Victoria’s reign. But he made more of an impression than most, thanks to his tireless self-promotion, his endless court cases, and his renowned licentiousness. The question is: was he really as bad as everyone made out? His salacious reputation stemmed from one alleged rape for which he was never convicted – an incident that damaged the cause of mesmerism as much as it damaged him, in the eyes of the public. And the committal hearing that resulted was inconclusive.

Not that there can be any doubt about Thomas Guthrie Carr’s character. He was a short-tempered, hypocritical, bombastic, touchy, conceited man. He was a liar and a cheat. He enjoyed humiliating people. He was irrefutably violent.

It’s possible, however, that he wasn’t a rapist. Because if he was a rapist, then he couldn’t have been a fraud.

This is an extract from Charlatan by Catherine Jinks, published by Penguin Random House Australia ($32.99).